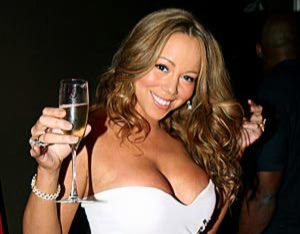 i love writing. but sometimes writing is a mighty tough trick.

admittedly, this is partly her own doing- the woman has a weakness for some slutastic clothes and slutastic clothes, as we all know, can be unkind. but it’s unfortunate that someone talented to that degree should be limited to an image largely defined by physical change and unfortunate fashion. because though we forget it, images are so often almost always very wrong.

i wanted to write about mariah carey not just because of monroe, but because when i couldn’t write tonight, all i could listen to was mariah carey. i don’t know how this was supposed to be helpful but at least it didn’t hurt. it would have been far, far worse to have suffered a michael bolton relapse and gone flying into the arms of his greatest hits. mariah carey seemed the safest, most respectable indulgence.

but i thought i had gone beyond mariah carey. i didn’t believe she could possibly have anything for twenty-five-year-old me. then i listened to mariah carey again. and again and again and an embarrassing number of agains, and i realized maybe i was wrong. because when writing was a really, really tough trick of an essay, mariah carey was there, as she (and the jackson five) said she would be. and i know now, mariah’s got my back.