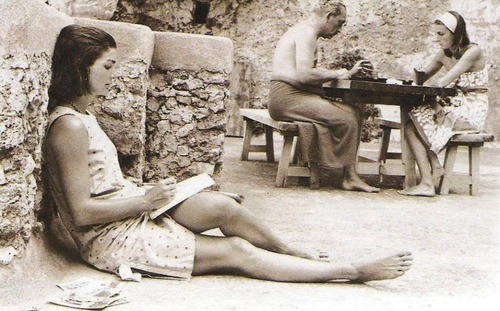 i am alarmingly resistant to different ways of thinking. not necessarily in life in general, but when it comes to jackie, i take an extraordinarily limited view and subscribe to the age-old paradigm that one must write a book, find an agent, find a publisher, get published.

this has not worked for me in the past so Lord only knows why i cling to it still.

the problem with this, with the narrowness of my expectations, is that it makes it that much harder to ever get off the ground. there are too many impossibles, too many ifs. and if you never begin, you go nowhere.

for six years, i have been sitting on a book. a book that is written and which contends that jackie is an empty vessel. that she is an icon that encompasses every aspect of the mid-century female experience. a symbol that can take on any set of meanings we want her to have.

i have been sitting on this completed work since june 23, 2005, and i have only just now realized that, with this research, i can write papers on nearly every topic known to man.

i am only just now seeing i can take this show on the road.

it seems so stupidly obvious now. to be putting into practice the point i have been making all along. and yet, because the word “academic” most often translates as a pejorative, i have held back. i have been ridiculous.

because i have complained time and again that biographers hand down faulty information from one book to the next as though jackie’s story were a handmade quilt with which we must never mess. i have said this is wrong and yet i have done the same thing.

i have the missing piece of a puzzle no one has begun to put together. and i have kept that puzzle unused, unopened and in its original box.

lara said it was going to be the year we get published.

i didn’t believe her.