read THIS and then let’s talk. 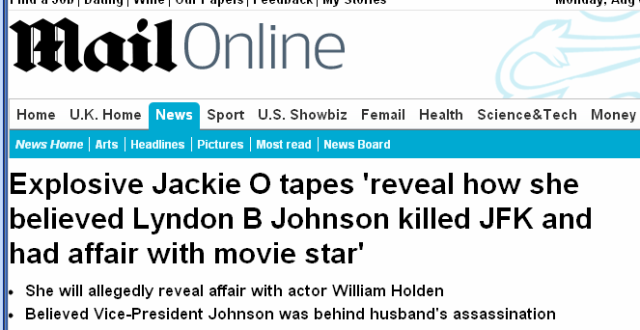 i will now answer a series of questions you have not asked:

(1) did lyndon johnson kill JFK and have a love affair with a movie star as the sentence structure of this headline would lead us to believe? no.

(2) was lyndon johnson ever governor of the state of texas? no.

(3) did jackie gave arthur schlessinger a deeply revealing interview that was not to be released until 50 years after her death? yes.

(6) did jackie have a love affair with william holden? she cut her hair like audrey hepburn’s in sabrina, so the answer is obviously yes.

(7) did jackie find the panties of jfk’s teenaged lover in her white house bedroom? this has been a set-piece scene in every single kennedy made-for-tv movie of all time, so it’s clearly totally true.

the theory on which i’ve based nearly everything i’ve ever written about jackie is that we are all of us reading tabloids all the time. yes, you may not subscribe to u.s. weekly and you may not know jessica simpson’s age and the name of her hairdresser, and you can pretend you’re above this, but if you do, you’re sorely underestimating the american celebrity-industrial complex.

we’re all in this together. if you read a snippet of gossip anywhere online this morning, you are reading u.s. weekly just as good as if you subscribed.

the tabloids are everywhere. they are on fox news and cnn. they are usually cited, but their information is presented within a news report so it’s hard not to take it as truth.

case in point- on sunday, a british tabloid recycled a story that, in america, has fronted the national enquirer time and again. by monday, it had traveled across the pond into the american mainstream press and we were all wondering if jackie was sleeping around and promoting conspiracy theories better peddled by oliver stone. never mind that every article sourced the daily mail and abc promptly denied the reports- the story had wings and it took off.

and, as much as i love tabloids, this is what i hate about them: i hate that this is the narrative people will remember. people who have never read a book about jackie and will not listen to the “secret” “explosive” jackie tapes in the fall, people who won’t listen then and hear her say whatever it is she’s going to say in that crazy strange voice of hers, they will remember this.

they’ll remember her as that woman who slept around to get even, who thought a man that was never governor of texas did her husband in.

that’s what they’ll remember though it’s not who she was.