[Last week… How the dastardly editorial policy of the movie magazines infected the entirety of the mainstream media!]

To understand the visual impact of the Kennedys—and, yes, their impact was more visual than anything else—you have to appreciate the aesthetic dullness of the political landscape into which they burst. In brilliant contrast to the contemporary politicos, with their grizzled visages and frumpy, mink-swathed wives, the Kennedys were unlike any political couple Americans had ever seen.

Just look at Jackie in the audience at the Inauguration. Situated in its historical context, her cream colored suit appears clean, crisp and vaguely futuristic. It shines like a hopeful beacon amid the sea of animal pelts. 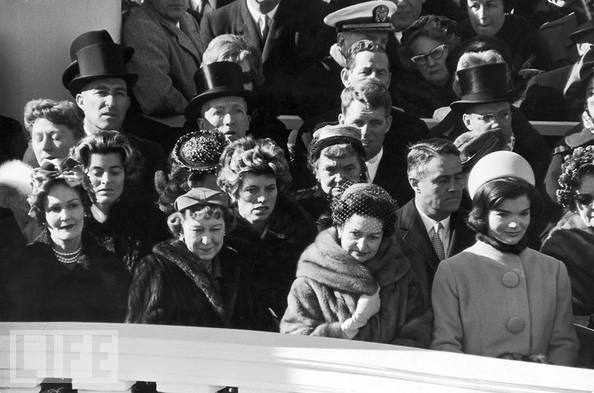 Historian Gary Willis characterized theirs as a “rule by dazzlement,” a phrase that goes a long way in capturing the First Family’s stunning visual impact.

People simply could not get enough and they did not know why. Neither did the magazines. Any attempt to pin down the Kennedy appeal resulted in a laundry list of clichés. In 1962, the editors of TV Radio Album fumbled towards an answer in their attempt to attach the term “star” to Mrs. Kennedy: “The word is used in show business to describe a personality so warm and vital that we forget we know it only as a picture on a TV screen or a name in newsprint. We feel that we know the actual person, as someone close to us. And certainly Jacqueline Kennedy is all that!”

With the advent of television and the resulting drop in movie attendance, the fan magazines reached a crossroads. To remain relevant, they had to expand their gaze beyond the Hollywood hills.

In “Jackie!”: The Exploitation of a First Lady, Irving Shulman succinctly captures the magazines’ perception of their own role in the American media, circa 1961: “It had at last come to pass that the world’s longest and most exciting movie was being performed every hour of every day at the White House and in locales throughout the world related to this master set. To record this living movie and assure its proper critical place in American and international history was the contemporary historic dedication of the fan magazines.”

It was an admirable pursuit and herein lay the distinction between the fan magazines and the mainstream press. Though their coverage was similarly characterized by provocative images and personality-based narratives, their approach was markedly different. The “serious” publications covered the Kennedys as political personalities, while the movie magazines approached them as show business stars- which they were.