but back to the naked pictures. you’ve seen them, yeah? or you’ve heard about them, right? it’s kind of hard not to. (at least if you live in america.)

the difference being outside a home versus in it. 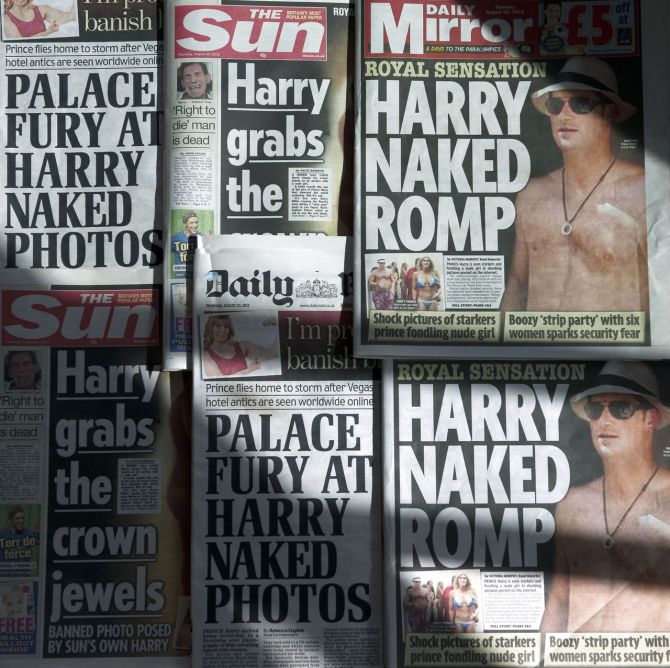 it’s not that i’ve no sympathy for the DOC, it just that difference is pretty big.

harry invited someone to his hotel for strip billiards (god love him for teaching us that game) and that person took his picture whilst there and later sold it for, presumably, lots ‘o dough.

in one sense, this is nothing new. it’s the stuff of gossip girl.

in the last 10 years, ordinary people “just like us” have acquired a whole host of technologies with which we can violate the privacy of our famous, our friends and ourselves. huzzah! and uh oh.

when a person becomes famous, it’s a given that he/she cedes a certain zone of privacy to the press and, usually he/she has some degree of control over how large a zone that is and how much information he/she gives away.

a good motto to live by is this: smart people share very little, silly people reveal all.

but if everyone around you has a phone and can take photos and videos and sell them to tabloids, do you see what that would mean if you’re prince harry? that you would get to have fun maybe NEVER.

it has real life applications too. check it:

There is the life we are leading and the life that’s being lead through our phones. I’ve noticed a difference in how people are getting their real life out to their cyber life. It used to be that when you were out in a group people were taking obvious, posed pics, which you knew would be uploaded to Facebook and tagged the moment they got home. Now, I’ll be out with people and at some point I’ll go to the bathroom. In the bathroom, I’ll pull out you know who to check on any new alert action and then I’ll see that the people I’m out with have already chronicled our night.

so, if everyone around you has a phone and can take photos and videos and post them anywhere, do you see what that would mean if you’re you? that you would have no control over your image. your privacy is, essentially, that of a celeb, albeit on the smallest possible scale and before an audience of “friends.”

here in chicago, there’s a whole facebook page devoted to people being illicitly photographed on the CTA. which is a horrible privacy violation, but because it’s happening to normal people (ie. minorities, the obese, the homeless, the poor), it’s funny, even benign. it’s when the privacy of a famous person is violated that we see how this plays out on a grander scale.

from the vantage of celebrity scandals, it doesn’t matter much what harry did in vegas. when the heir to the throne was overheard telling his mistress he wanted to be her tampon, pretty much everything that follows is tame. but what has surprised me is the lack of discussion about how our phones are reducing the celebrity’s zone of privacy and, by extension, our own.

that’s a discussion that needs to be happening.

it’s a discussion maybe not helped by the fact that my girl li.lo is the one having it…

lindsay lohan recently had a smackdown with a congressional aide in her NY hotel room. (did you hear about this? ridic.) the guy took pictures and videos of her with his cell. she tried to take his phone away. he may or may not have tried to strangle her when she did.

this story is bizarre and, consequently, merely refocused attention on the ongoing plotline of the lifetime movie li.lo is a crackhead loon. but the issue at hand here truly is a big effing deal. li.lo’s PR flack’s take: “We’re living in a time where everyone walks around with a camera and that creates issues for people who are famous.”

no, dude. it actually creates issues for everyone. and the nature of what fame looks like, what it feels like to be famous and how we as normal people present ourselves is changing because of it.

You talk to people in the movie business who have been doing this 40 years and they all say the difference is that, back in the day, you could go and have a drink in the bar, get drunk, fall over, have a good time, relax, whatever, and no one would know about it. But now everyone’s got a camera… So you can’t live a normal life anymore.

an interesting perspective that overlooks the fact that this maybe is the new normal. for us all.

4 thoughts on ““but now everyone’s got a camera… so you can’t live a normal life anymore”: celebrity, cameras, hot harry, li.lo, and james bond”