this post may not amount to anything more than a prolonged exclamation of LOOKIT THIS IS BIZARRE!!! accompanied by pretty pictures, most of them in glorious technicolor… but around the 50th anniversary of john kennedy’s assassination last fall, i noticed something that struck me as incredibly odd: a new cultural obsession with jackie’s pink suit.

it’s a garment most everyone knows and one which, obviously, is a key element that’s visually associated with the event of JFK’s death, but there had been surprisingly little discussion of the suit itself in prior years. lo, the tides have turned.

increasingly, especially at the 50th, attention has zeroed in on this suit. a quick round-up, if you will…

(fyi, we’re apparently meant to be obsessed with all the things we didn’t know about this piece of clothing. chief among those things is that it wasn’t a chanel but a knock off by chez ninon [as karl lagerfeld reminded us via vogue in 2012], and that jackie had worn it many times before. cases in point: 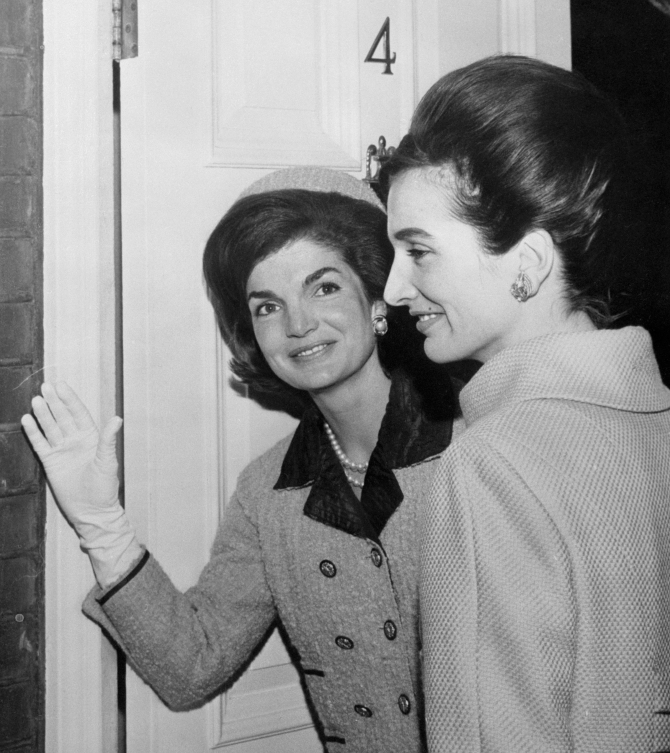 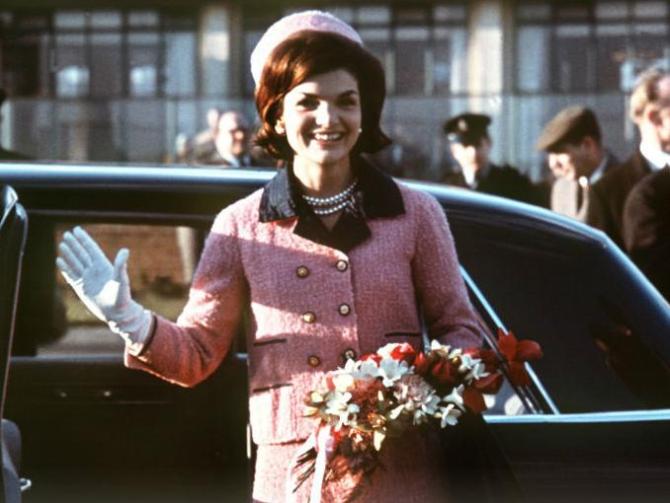 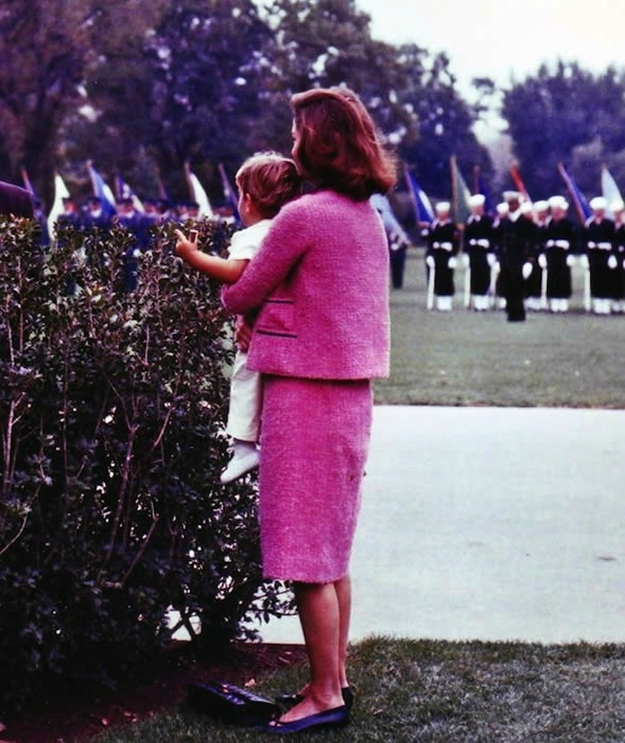 so now you know!)

this interest in the suit maybe began with a 26 january 2011 report in the l.a. times about jackie’s pink hat.

it’s missing. no one knows where it is. not even the l.a. times. and that was more or less the end of interest in the hat.

which is curious because we know where the suit is, we just can’t see it. we do not know where the hat is, but presumably someone has it and maybe it could be found.

but it receives only brief mention in a 22 november 2013 article about the pink suit featured in the washington times (which, in a tribute to the sizable news loop at play here, is mostly a recounting of a CNN report):

‘The hat is a mystery,’ one historian wrote, CNN reported. ‘The hat apparently goes to the Secret Service initially and the Secret Service turns it over to Mrs. Kennedy’s private secretary and then it disappears. It has not been seen since.’

and yet the hat is apparently a mystery that holds far less appeal than that of the pink suit.

the hat is a sideshow. the suit’s the main event.

as the UPI’s 22 november 2013 report tells us: ‘the first lady’s clothing was a colorful and tragic constant throughout the day.’

‘The single symbol of that event and of her as a persona is that pink suit,’ carl sferrazza anthony told the l.a. times in 2011. ‘It’s all anyone need see and, in an instant, people know what it is in reference to.’

but why this sudden spark of interest in this particular piece of clothing? why now? why is this how we’re approaching the death of jfk 50 years on- through fun facts about what his wife was wearing the day of?

these are questions i can’t answer (or maybe i can… we’ll see), but i find them troubling.

it seems the suit has come to symbolize the weird mix of exuberant hope followed by unspeakable loss that characterized that day, acting as the through-line between the triumphant arrival and tragedy. 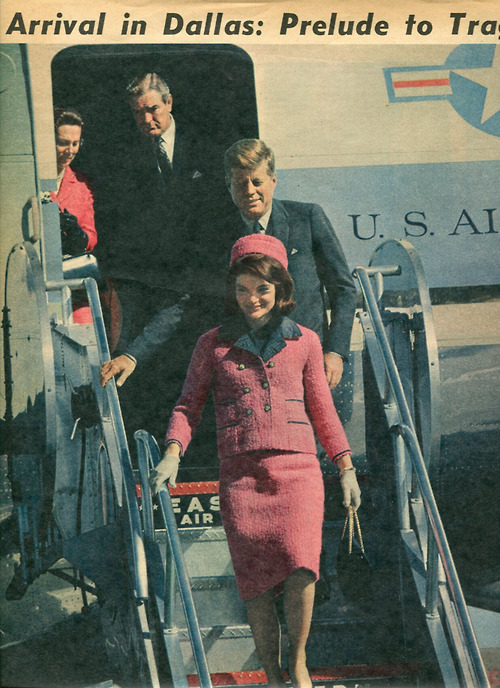 but it used to be that jackie acted as the through-line, the seam between the before and after. are we in the process of reassigning that role to her clothes?

in the reports about the suit, we’re reminded of two things: (1) this is the suit jackie was wearing when her husband was killed and (2) it has never been cleaned.

it is almost always identified as being ‘bloodstained.’

i imagine this suit means something altogether else to someone who was alive then, but it seems important to point out that, in november 1963, telecasting was largely still black and white (CBS evening news didn’t go color until 1965). the evening news had, in fact, only just expanded from 15 minutes to half an hour, so it was worlds removed from the holograms wolf ‘THIS IS THE SITUATION ROOM’ blitzer now regularly shows us on CNN.

when john kennedy was killed, it went like this…

there was no video footage, no color photos.

the best visual aid cronkite offered viewers was an 8×10 black and white glossy of the kennedys in the motorcade prior to the shooting, which he then held up as the cameraman zoomed in on the image.

this was cutting edge reporting for 1963:

(srsly, if you ever have six hours and a bottle of vodka, watch the original CBS and NBC coverage. it is AMAZE, in no small part because the dudes over at NBC cannot master the newfangled technology of a speaker phone, but also as a vivid illustration of how a newscast can affect one’s emotions towards an event, particularly with regard to whether one need panic.)

most newspapers were black and white as well.

and, if they did spring for a color photograph, it was of a portrait of the president rather than a candid from that day.

my point here is that the pink suit wasn’t immediately seen as pink. more often it was depicted in black and white- both in the photographs and in all the contemporary television coverage. in truth, my inclusion of loads of color photographs here is extremely deceptive as we now have easy access to tons of them whilst people alive then didn’t.

the papers and walter cronkite said the suit was pink and so readers and viewers mentally colored it in.

they wouldn’t have been likely to see color photographs until the release of the 29 november 1963 issue of LIFE, which included 30 frames from the zapruder film. then they would’ve seen the pink for themselves.

so our relationship to this suit has been evolving for some time, with the color becoming increasingly important- presumably because it’s girlish and pretty and its defilement is hauntingly pathétique.

now there’s even a novel a’coming, which has an incredibly cool cover in the UK and a cover that removes jackie and further fetishizes her clothes in the US…

which is not ok. why are we zooming in on an outfit? why are we removing jackie from the pic? when did she become disposable? as someone writing about her largely out of disgust that our image of her has shrunk to class and dignity and clothes, i’m pissed.

because, while this isn’t the moment in which she matters most to me, it is the point at which she is most significant in american history. the moment when her husband was killed and she was there and she, by her very presence, provided a visual assurance that the transition of the government would be carried out as the constitution commanded.

that is what matters. that is the bigger picture. that is what goes missing when we zoom in to peer at the suit, to revel in its condition, to recount every little known fact, as though those were things of grave import.

we are not kind to our women in american history. jackie herself once said that ‘american history is for men’. women, i guess, get fashion magazines.

here’s the thing: i’m praying to make it to the release of the manchester interviews in 2065, but presumably ain’t none of us going to be around in 2103. 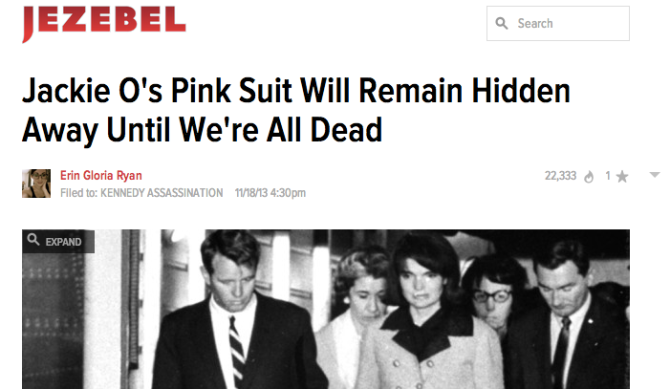 certainly no one from my generation unless they’re 120, and the people from the generation or two below me will all be very very old.

so we’re reducing a woman and a historical moment to a piece of clothing we are unlikely to ever see.

which may make this seem a terribly silly thing to have just spent 1,361 words on, but it isn’t. here’s why: this is how shifts in story-telling occur.

there’s a point at which- whether we’re aware of it or totally oblivious- due to a subtle shift in the conversation within the media or a spike in interest around a ‘new’ detail or whatever, the narrative around someone can fundamentally change. this is precisely how jackie’s supposed love affair with RFK goes from being rumor to ‘fact’.

the story changes ever so slightly, so it’s more believable or more interesting, and then that is the story we tell from then on.

the story of jackie as clothes-horse is long-standing, as is the notion of her as a commodity. 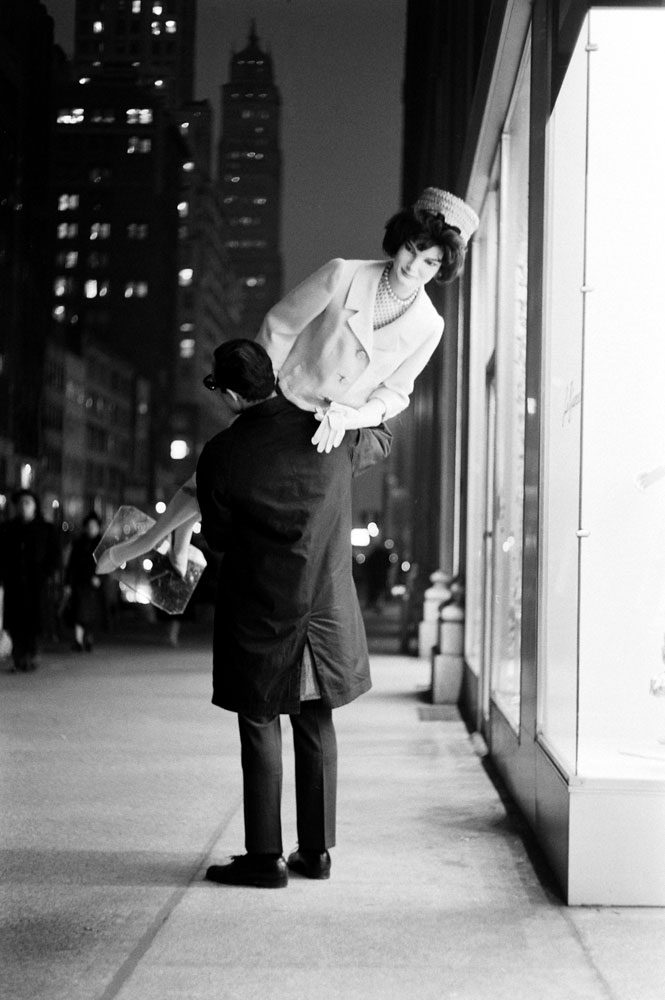 but this pink suit business is something else. it seems to me a way of disconnecting from what happened in dallas whilst seeming not to. the suit is stained, so we can flatter ourselves that it still holds emotional impact, but when you remove the woman from the suit, when you erase her from the picture, when you zoom in so close that you can no longer see her, so close- in fact- that she becomes all too easy to forget, then you’re just staring at some fabric smeared with brains.

the pink suit shouldn’t be the symbol. she should.

it’s the story that makes the suit powerful. it’s the story we should remember. instead, we’re just stupidly fixating on a piece of clothing we’ll none of us live to see.