i’ve repeatedly banged on and on and on about how this is the image of jackie most often used in the press since her death in 1994. 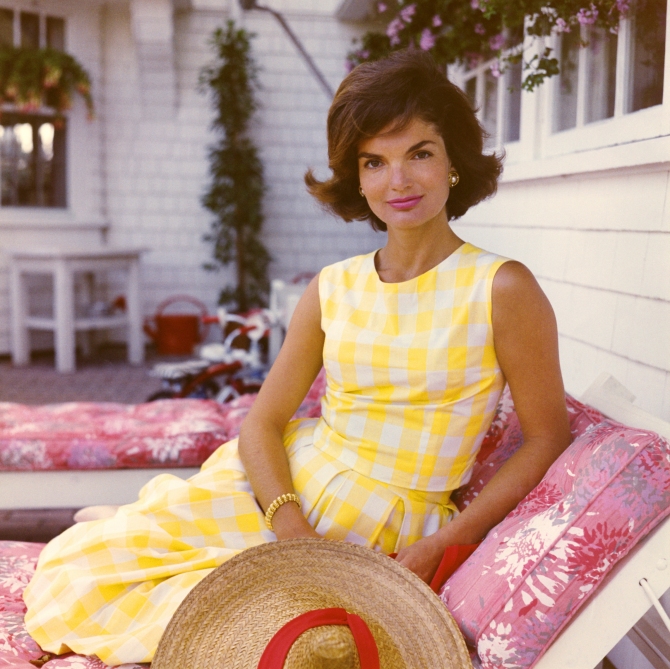 how that has long been the case

and how i want more because i think we can do better

than this one photo shoot

i, as you all know by now, want this:

but here’s the thing we maybe don’t think about when we see the image of the yellow dress or a variation of it: she is, at the time of that photo shoot, 29. 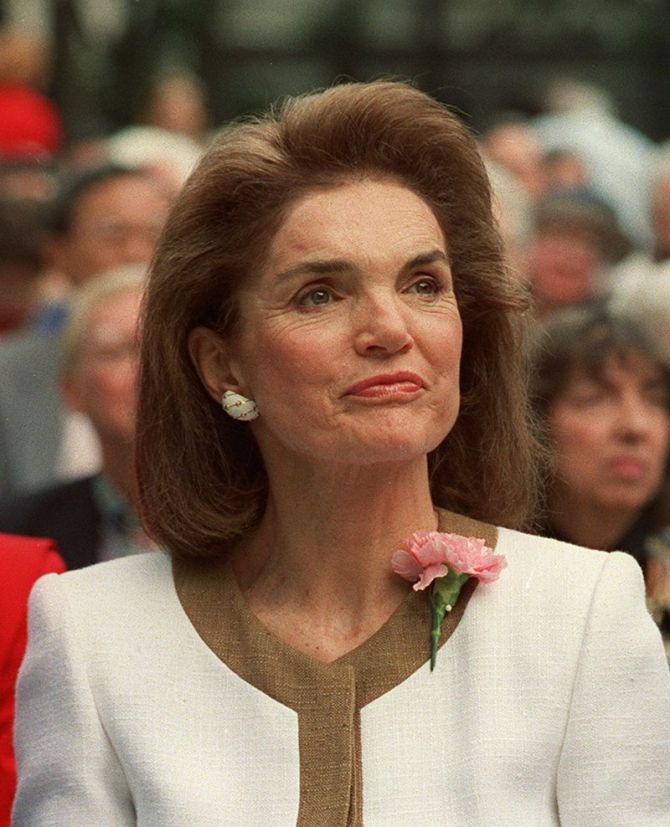 and it’s surprisingly easy to forget about THAT jackie. jackie at 60.

when she died at age 64, i thought to be 64 was to be old as the hills. now, i know it isn’t and all those people who eulogized her were right to say she died young.

the other day, during a random google image search, i was startled by a photograph of her in her late 50s. 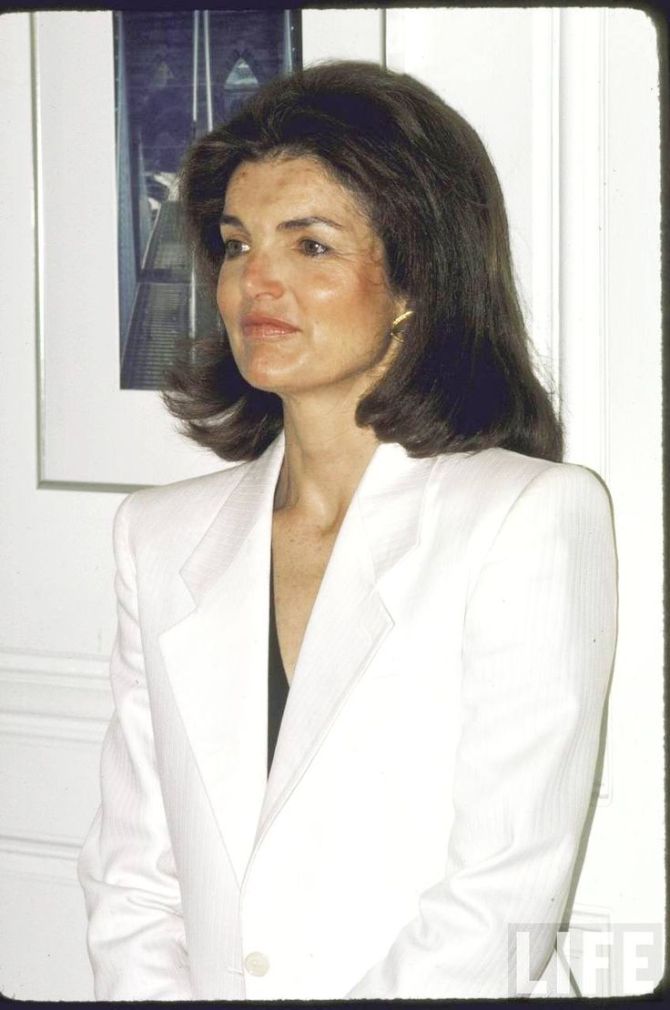 this woman i think and write about every single day. i’d forgotten how she looked.

subsequently, i was startled to realize how few photos of her post-1980 were available online. (and how teeny tiny the ones that are available are.) 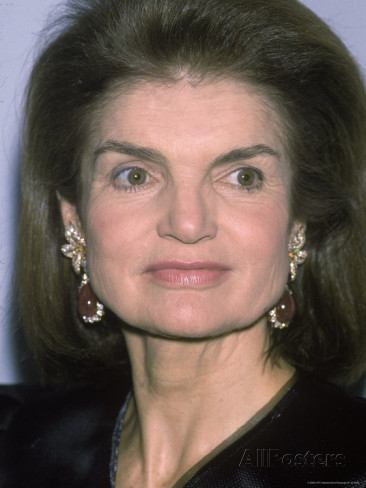 which points to the cutback in her public appearances, yes, but also highlights our own uneasiness with the images of icons who have aged. 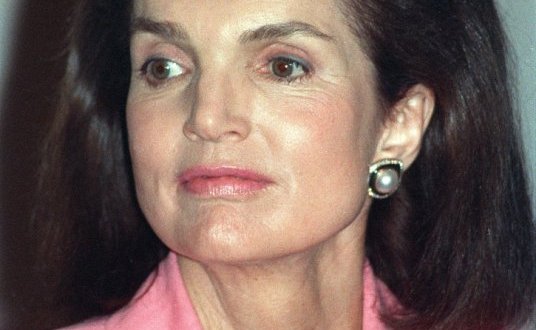 this is true, i would argue, across the board.

when we memorialize, particularly in the photographs accompanying obituaries, people are frozen at the point at which they achieved fame which is, not coincidentally, often when they were prettiest. when i wrote about lauren bacall, photos like this at a decently large size were plentiful:

and it isn’t just women.

when i was up in the peaks last month, i got in this convo with the dude who lived next door to the cabin where i was staying. when he asked what i studied, i told him life-writing. when he heard that, a man after my own heart, he said, oh, like obituaries? and launched into this exposition about how recently, with the death of dickie attenborough, he’d realized that obituaries are really just amazing little biography capsules.

the other thing he noticed? that, in obituary photos, everyone is young.

he specifically cited the case of dickie attenborough. and though it doesn’t appear to have entirely true, it’s interesting that he felt it was that way… 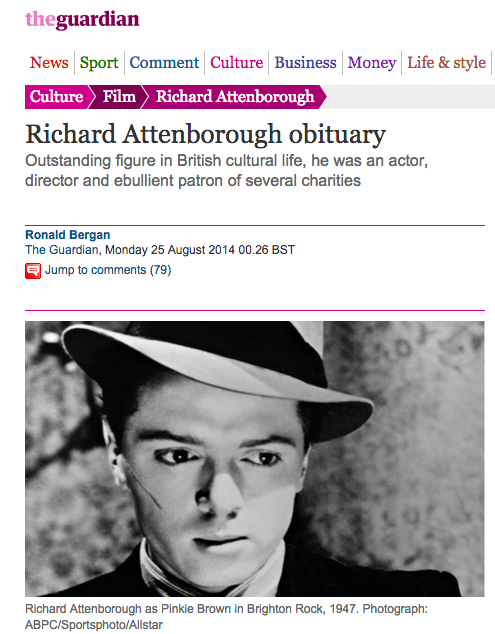 because it is almost always that way with women…

which, you can argue, is the way it should be because that’s how people would rather be remembered, from when they were young and dewey. that is, also- not coincidentally- how we ordinaries often do the obituaries of those we love: memorializing them with 40 year-old wedding photographs or 30 year-old glamor shots. 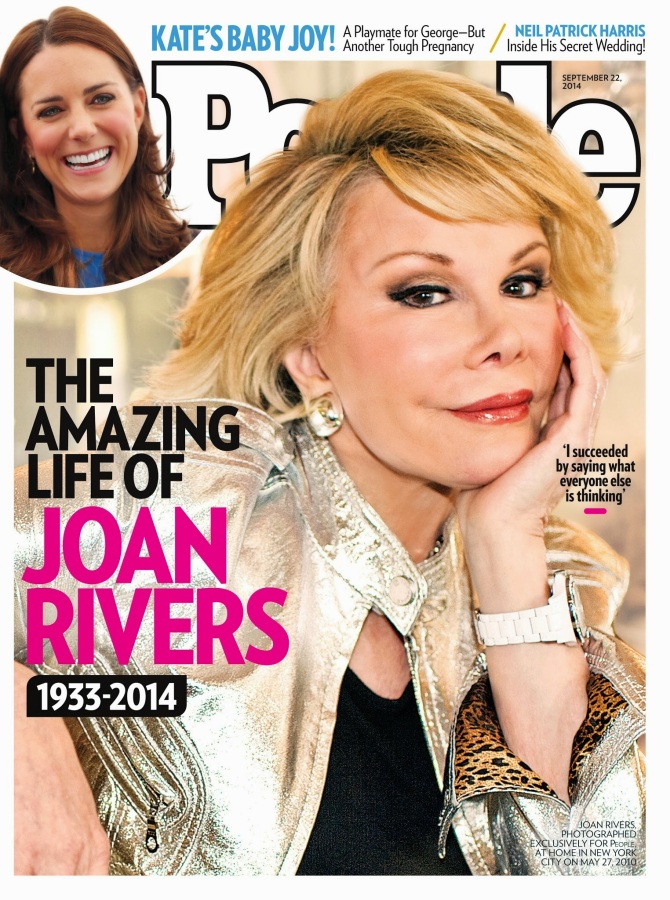 who is actually, despite looking totally tacked on here at the end, the person from which this post springs.

because i’ve been interested in obituaries for years. but i’ve never before so consistently seen a photograph of someone in older age used in them. 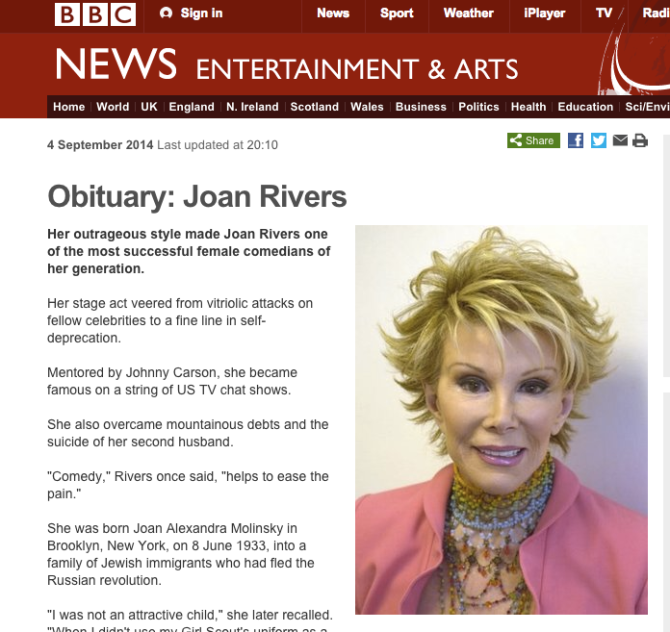 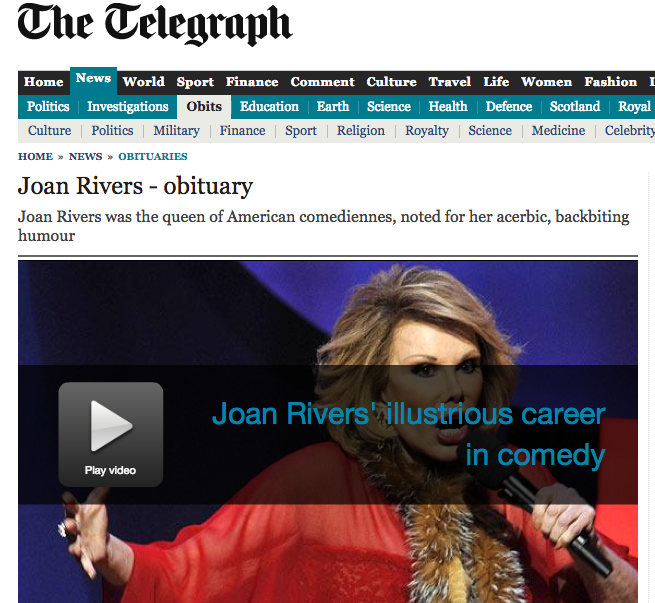 the guardian went young for the actual obit…

but then went older for their assessment of her legacy…

which, for me, raised this question (which may either be so cynical and so far from the truth that it’s laughable or dead on): did they go with photos of older joan rivers because of her face?