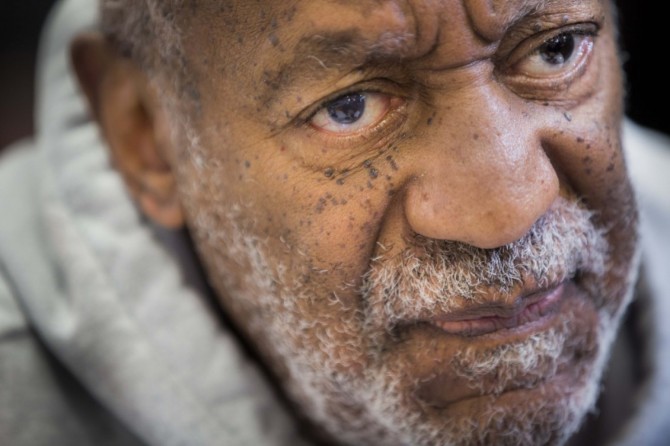 this is epically dreadful, non? 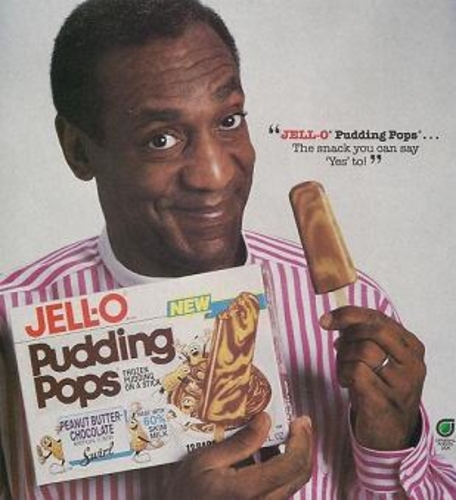 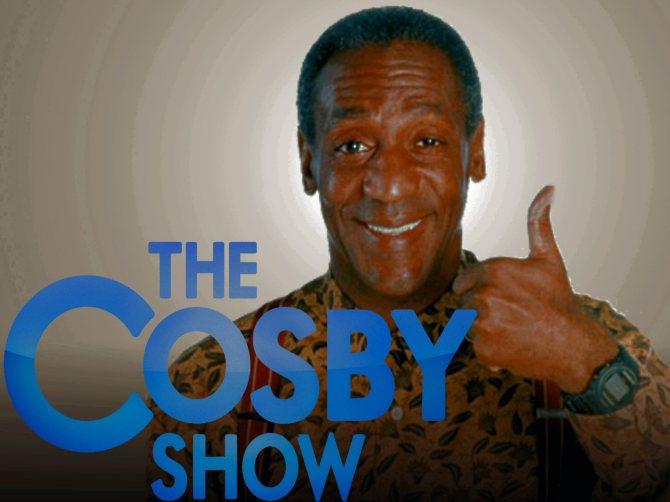 doesn’t go so well with this: 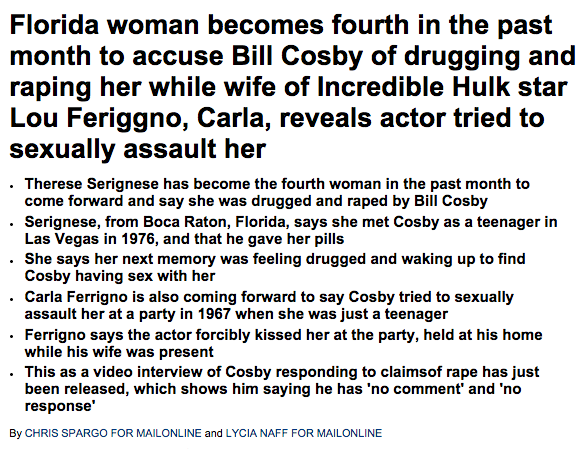 and because, much as was the case with the allegations of assault against jian ghomeschi (which i wrote about last month), people knew.

the problem with the cosby case is that it wasn’t just people in the media who knew. 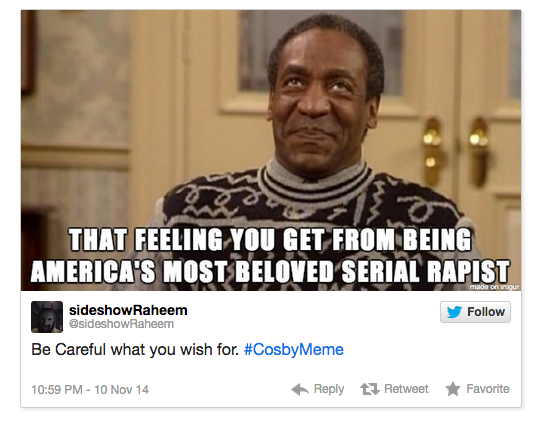 let’s be real, this wasn’t such a “secret”. these allegations have been around for a decade (the guardian has a good breakdown of them here). yeah, they’ve expanded exponentially in the last month and are now being taken seriously, but they were around.

a friend and i were talking last night trying to piece together when we first heard about it, whether it was before or after cosby’s son’s death and we thought it was before. which would’ve put it at 1997 at least. which is waaaaaaaaaaay earlier than all the reports are citing. by which i mean not that we were people in the know, because we weren’t, but that even we have this memory- at 16, 17, 18 in 1996, 1997, 1998- of being aware of accusations around cosby. it was visible to that degree then, if we’re remembering right.

if we’re remembering wrong, then it just means that it was visible to such a degree when the accusations first arose that it felt like we’d known a lot longer than we had.

a biography of cosby was released this past september. 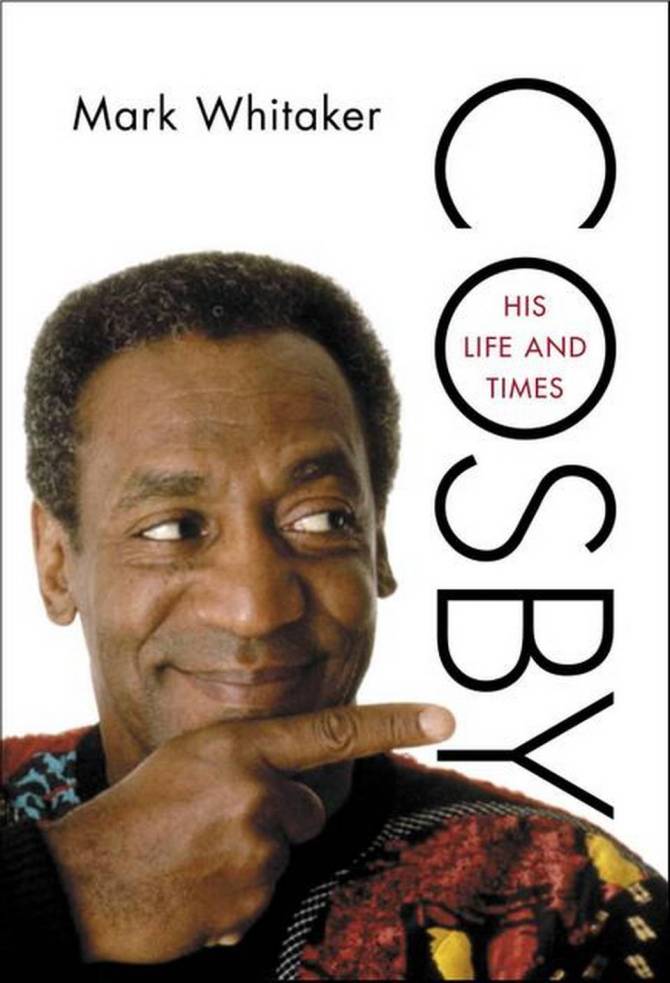 full disclosure: i’ve not yet read it. but i was shocked, when it came out, to read in the reviews that it didn’t mention the allegations of sexual abuse which have been made against cosby in the past decade. it is my understanding that IT DOES NOT MENTION THEM AT ALL. (please, correct me in the comments if i’ve got that wrong.)

from the wall street journal‘s review:

For all his enduring success, Mr. Cosby has become a problematic figure. As he has aged, he has affronted some blacks and whites with his lectures to African-American parents about taking responsibility for their children and his admonitions to young gangbangers to straighten up. And his reputation as a moralist has been clouded by accusations by several young women that he drugged them and took advantage of them sexually.[…] His book has all the virtues of a classic news-magazine cover story—it’s fluid, admiring, packed with detail and anecdotes. But, like an old Newsweek or Time piece, it’s polished to such a sheen that Mr. Cosby’s complexities often recede beneath the gloss. And the sexual-abuse allegations go unmentioned.

i remember thinking at the time, HOW DO YOU WRITE A BIOGRAPHY OF SOMEONE AND NOT INCLUDE THAT??!!?! particularly if you’re looking at them as an american icon, as whitaker purportedly was. 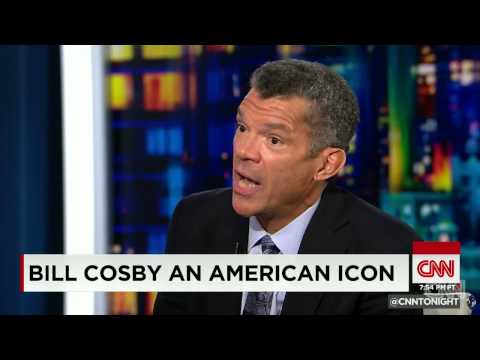 the NYT, in its rundown of why this story gained traction right now, spoke to whitaker. here’s that: 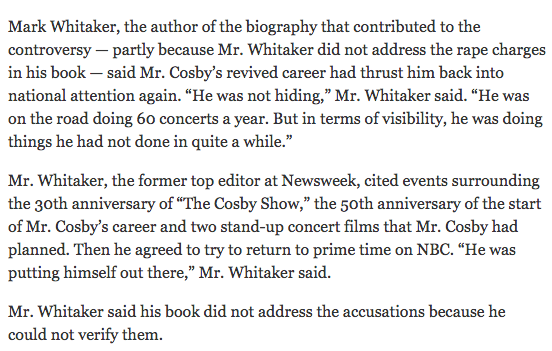 which, well, to be frank, THAT IS BUNK. it is ABSOLUTE BUNK.

my impulse was to say that it’s ABSOLUTE BUNK if you’re a biographer and maybe journalists have different codes and that somehow explains how when whitaker, who is a journalist, wrote a biography he was operating by this code of accusations having to be verified. but then i realized, really, NO. that is ABSOLUTE BUNK. because no matter what story of a life you’re writing- a report in a newspaper or the book of a life or whatev- you do not have to prove the accusations to write about them. you simply write about them as accusations and say you couldn’t prove them. voilà. that’s honest. it’s real. because the accusations may not be The Story you’re telling but they are a part of The Story. it is unethical to leave them out. 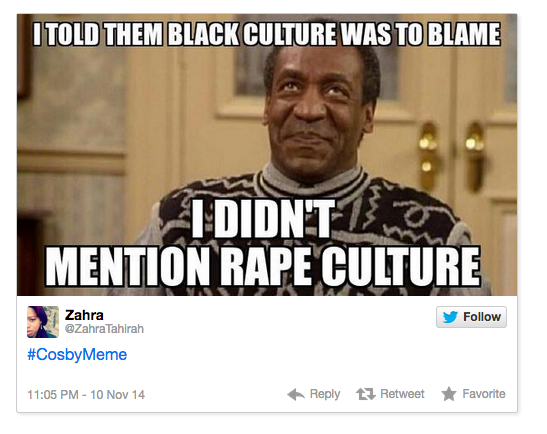 the other question one could ask is: how do you review a biography with that glaring of an omission and not mention it? well, here’s how you start: 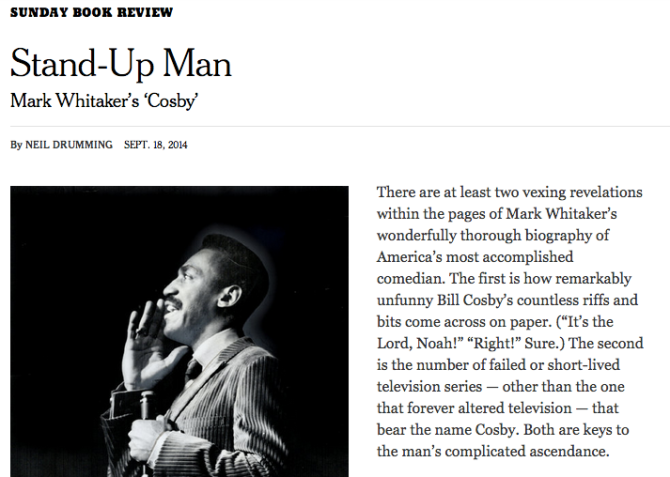 the thing about writing a biography is that you have to deal with the unsavory stuff, the things your subject did that make no sense to you. i’m not saying you have to make sense of them, because we are all people and we do things that even we ourselves do not understand, but you have to put them in. you cannot erase them from the story. THEY ARE THERE. whether you like them or not.

jackie said shitty things at random deathbeds. i’ve written before about all the power i have over how i present to you the fact that jackie reportedly said shitty things at random deathbeds. but regardless of how it’s presented, it’s something i’mma have to deal with because it’s part of the story. it’s an inexplicable thing she did that i don’t like, but just because it’s inexplicable, just because it doesn’t fit into the picture of the woman i want to write about, doesn’t buy it a pass from being included. 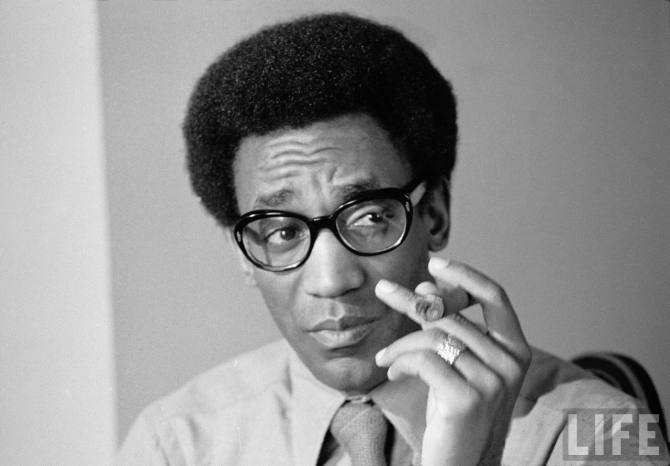 books take a long time to come to fruition. whitaker and his editors had years to change their minds and put this in and they did not. (probably because whitaker had access to cosby, which raises the secondary question of how biographical ethics are abandoned for access…) 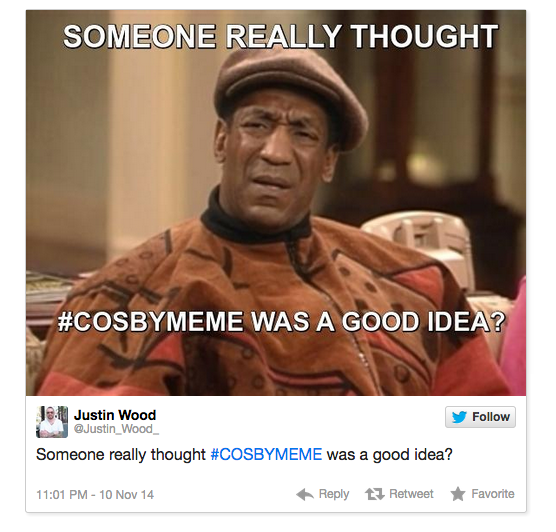 the reviewers had a similar opportunity to call out the book for it’s omission of the allegations and many of them did not.

it says something deeply unpleasant about our culture’s attitudes towards sexual violence and celebrity that there are this many levels of complicity.

there are, of course, reasons for that. ta-nehisi coates has an amazing piece up at the atlantic about his own experience of writing about cosby and why he did not write about the accusations of drugging/abuse/rape in 2007/2008. go there. read it. it’s not an apology but rather an admission. that he screwed up. that we all screwed up. that no matter how much you matter, how much of an american icon you are, how much we all love pudding pops or the cosby show, it should never have taken ten years to see this.

one last thing. if you’re thinking, why didn’t all of these women come forward years ago? why have they all stayed silent? a caveat…

one of the women said this to the guardian:

there’s the fear no one will believe you. but, coupled with that, there’s also the reality that there’s a good chance you’re not even going to be heard, because cosby is powerful. we forget that, i think, amid all the all-american business and the pudding products. dude has power. watch this video from a recent AP interview with cosby. it starts at 0:35…

you can see how whitaker might’ve been cowed. seriously. go watch it right now. see where- after the interview’s conclusion, after he has said he has no comment in response to the accusations- cosby asks that the AP edit out his saying he has no comment, tells the interviewer it shouldn’t be included in the write-up if the interviewer wants to be considered “serious” and that they didn’t bar the asking of that question in advance because they- his wife is with him in the interview- thought the AP would have “the integrity to not ask.” the interviewer and another AP employee in the room then assuage his fears by reassuring him that they’ve not written about the allegations at all and have no plans to.

cosby’s career has been imploding for a few days now, weeks even. but this video? the fact that an organization that was groveling for access a fortnight ago has changed course and released this footage? mark my words, a power shift of epic proportions just occurred. 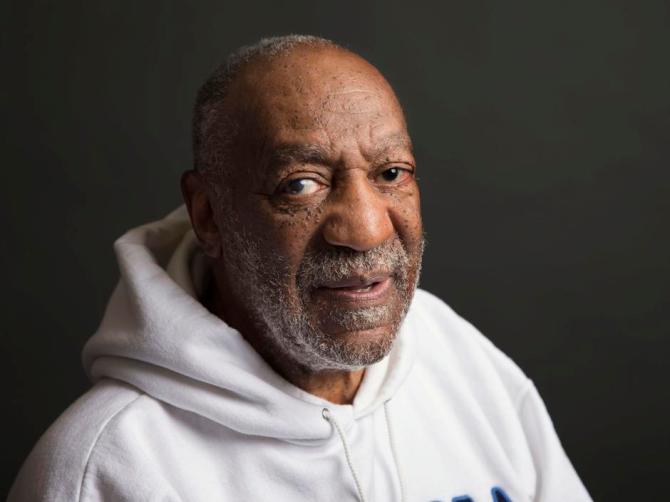