HOLY MOSES, ya’ll, it is like the gossip week that keeps on giving. the sony emails, which i’mma leave you on your own with for now, and then this crazy story about leonardo dicaprio leaving a club with twenty women.

if you’ve been around here awhile now, you know leo dicap is my forever love because…

if you’re here simply because you googled “leonardo dicaprio manbun,” (1) welcome, and (2) leo dicap is my forever love and that is because…

so leo is my forever love but that love has limits, fyi. it is not unconditional. i’m not particularly in love with his manbun though i admire his commitment too it. and i don’t love his karate moves or his dance moves or his penchant for dating victoria’s secret models under the age of 23.

he is my forever love in spite of those things. 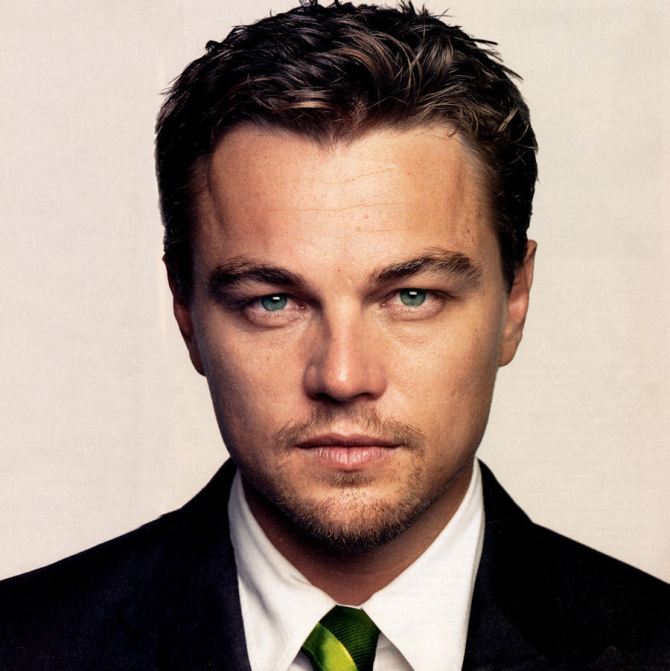 (meta moment: to let you in on the wormhole i just went down, vladimir putin called leo a “real man” in 2010, after he made a donation at russia’s tiger summit- which ever so briefly sent me spiraling off into the memory of viktor pentrenko skating to salt ‘n peppa’s “whata man, whata man” in the mid-90s: because, in my mind, viktor petrenko would play vladimir putin in the lifetime movie of vladimir putin’s life and vice versa.

oh and then there’s this…

so yeah, we were at leo as my forever love and how i love leo in spite of a lot of things. i wrote about this last summer when my forever love leo dicap was masquerading as leo “SUMMER OF MY LIFE” dicaprio and i was rather annoyed and all like, leo, come now, GROW UP.

where we at now? this report of how leo left art basel with 20 women.

no, wait. we’re actually at this quote from what new york identifies as “this witness”- which is journalistic code for “this rando”- talking about leo:

“He left with 20 girls. Leo and 20 girls. He is my hero. He was overflowing with models everywhere. The Jonas brother looked scared, like he was going to drown and suffocate in the women. His face was hilarious.”

who is this rando? according to this report: “A eye-witness was quoted in various magazines.”

oh, come now. not to lawyer you or anything but…

COME ON. is “A eye-witness was quoted in various magazines” the legit-est thing? not to mention that they didn’t get the indefinite article right. (srsly, are the proof-readers on strike this week???)

following the trail of links we go from the telegraph (“THIS is next level — even for Leonardo DiCaprio”) to the new york daily news, which is where rando seems to have orginated, as “a spy in South Beach during Art Basel”/”our awestruck snitch.”

note how they do not explicitly say rando was at art basel, but “in south beach.” so, basically, dude was in the same town. and i’m assuming it’s a dude because it makes waaaaaay less sense for leo to become a female onlooker’s hero for taking 20 women out of a club.

so, um… does any of that change the story for you?

personally, i want pics. and i say that as someone writing a biography that is, at times, hugely dependent upon photographs and who, therefore, realizes the extreme limitations of photography- all the things that are left out and all the things we read in- but still. i want pics.

like, when you first heard of this story, how did you envision leo? manbun, likely. but beard? fyi, it’s FULL-ON GETTYSBURG at the moment.

which, loving gettysburg, i- of course- ❤

and when you saw this picture:

yahoo! celebrity uk & ireland (good heavens, get a catchier name!) would have you think that is what this was…

and, while i don’t know how yahoo! played this story in the US, i do know they played it super gross in the UK…

as though, if he left with 20 women, he banged every single one.

when you first encountered the rumor that leonardo dicaprio left a club with 20 women, did you assume he banged every single one?

(fyi, to spare you the agony of this gallery… 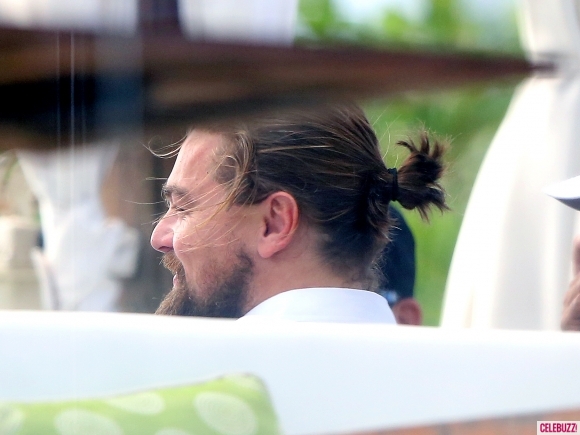 so that was très inconclusive…) 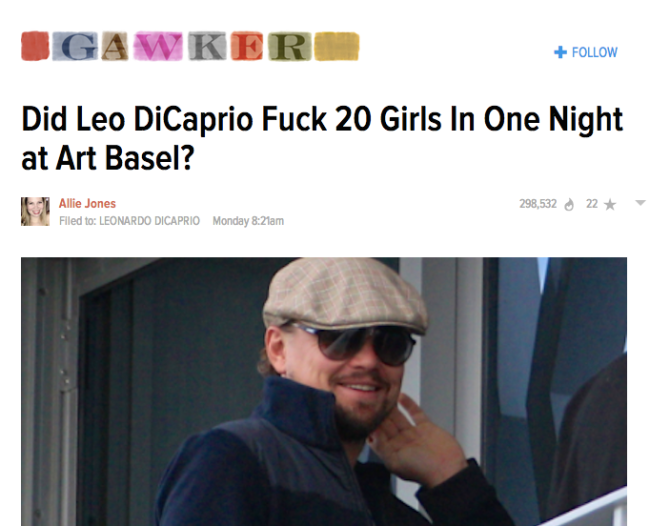 what is up with this?? that leap from taking 20 girls home to banging 20 girls? that’s weird. and what does it say about what we’re ready to believe about dicaprio???

i don’t know what happened at art basel or in leo’s hotel room and i don’t really care beyond the fact that i saw this was a story that was “trending” and was curious to see what there was to trend. and once i got looking- because i’m writing a biography primarily tracing stories through gossip and the press- i saw all of the things happening with this story that i see happening in stories from 1970.

turns out there’s not much to this story beyond the fact that some random guy said leo left art basel with 20 women. something that, given dicaprio’s reputation as a modelizer, as well as his compelling portrayal of jordan belfort in wolf of wall street…

has the tiniest, tinniest ring of truth, but for which there is squat for proof.

which isn’t to say there aren’t photos… 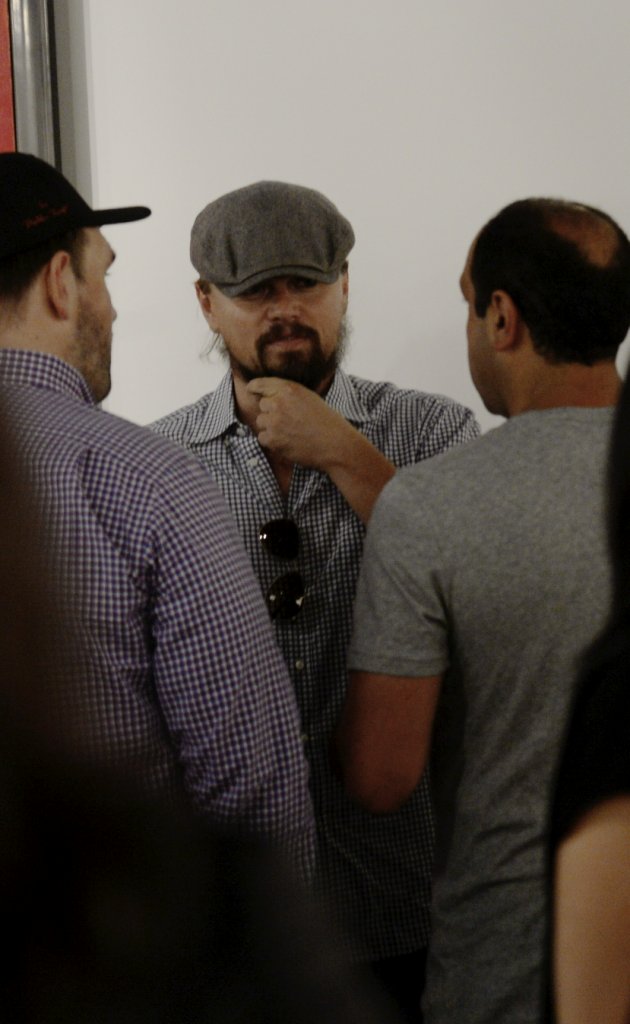 there are photos. deeply boring photos. 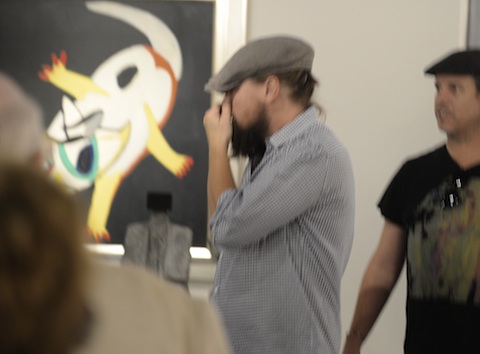 and they feature a decided lack of women.

it seems only cosmopolitan has questioned the validity of this report of leo taking 20 women home. other outlets have simply printed it with glee. but cosmo– seldom the voice of reason and yet seemingly the lone one here- asks:

But could this possibly be true? How do you get that many women out of a nightclub and into wherever you’re taking them without anyone managing to get a photo of it? That’s like the size of a third-grade class going on a field trip. People will notice. Unless the women are invisible. Maybe they were invisible?

of course, though, then they backtrack and say “But if anyone could pull off such a massive girl heist, it would be Leo.”

would it? is that really what we believe? and if so, aside from what that tells us of what we think of dicaprio, what does it tell us about ourselves?

riddle me this: do we need leo to be extra next level because george clooney is a married man? 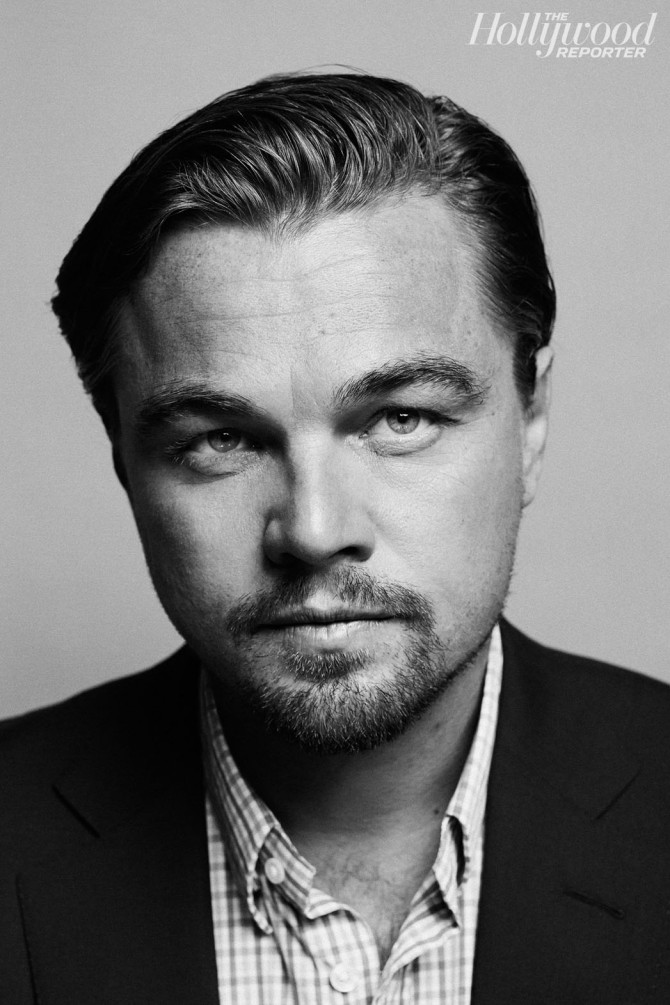