i read the daily mail on the regular because it’s pretty much where all gossip stories start. so i’m aware of the mail’s howshallwesay… COLOSSAL PROBLEMS. but every now and again, there’s an especially egregiously awful article for which britney is required to express the resulting spectrum of emotions.

and yesterday, that was this:

which made me go:

theresa may is the UK home secretary, a position that means she is responsible for domestic things, like national security, policing, immigration, etc.

full disclosure: there’s a political layer to what i’m about to unpack. it’s right there in the article’s opening:

but i’mma let that be rather than bungle into UK politics about which i do not know enough and instead stick to what i do know and look at the dodgy gender business happening here.

may, during her tenure, has gotten coverage- by the daily mail– for what the daily mail has previously called her “bold fashion choices.”

it’s worth noting that the daily mail seems to have a bizarre preoccupation with may’s cleavage and her clothes. a preoccupation which, in 2013, gave us this amazing assessment:

and a rather epic presentation of supporting evidence.

which brings us to The Now and the mail‘s 7 october report on teresa may’s dress.

fyi, because this was the first thing i checked after reading the opening paragraphs, yes, this report is written by women.

which felt a bit

though i can’t totally say why.

maybe because it feels likw we should know better? because it is 2015? because, as the article goes on, it gets really really gross?

heavy emphasis is placed on the price-tag of the dress and also its detailing.

to the extent that, were it not EXCEEDINGLY clear that it was brought to us by the tesco bread and beer division, i would have wondered if this article was sponsored by roland mouret.

the exposed zipper! hand me my vapors!

to contextualize this just a wee bit, this is not a new trend. marc jacobs’ exposed zippers made a splash at paris fashion week in 2009. roland mouret was rocking it in 2010. it’s a look that gained mainstream popularity in 2011, when victoria beckham’s collections began incorporating it. so what i’m staying is that this trend is neither new nor that shocking. it’s not exactly cutting edge when you could buy it at h&m four years ago.

so what are we to make of may wearing this dress?

well, for one thing, TOTALLY FORGET EVERYTHING SHE SAID IN HER SPEECH ON IMMIGRATION. because this is about dresses and middle-age. 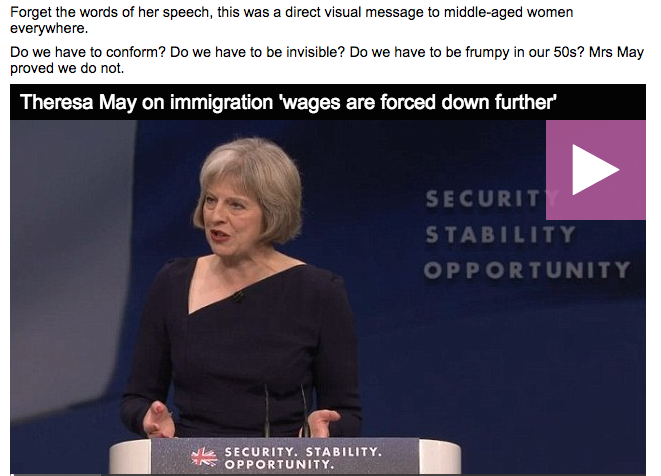 you guys, these are three of the worst paragraphs ever.

yo! FORGET WHAT SHE SAID AND THINK DEEPLY ABOUT HER BODY AS COVERED BY THIS DRESS AND RAVAGED BY THE REMORSELESS MARCH OF TIME.

oh but wait. no, really, THIS is The Worst Paragraph Ever:

yes, yes. we’ve now imagined the home secretary out of her clothes.

and then, THE VERY NEXT PARAGRAPH:

purely from a literary standpoint, this has to be the worst transition EVAH.

her clothes are on the floor. and i thought we were supposed to forget her speech. now, after we’ve undressed her, we’re supposed to remember her speech and note her “inner political steel”?

i have received no messages about her leadership or ability to connect. nor does the next paragraph illuminate either of these, though it does attempt a blow for gender parity:

a quick aside, because we are talking about a country wherein there was recently prolonged discussion of the prime minister’s genitals: i think there’s an important distinction to be made here.

the piggate discussion emerged from the publication of a book and had to do with an actual news story- a gossipy one, but news nonetheless. in contrast, the daily mail‘s article on may’s dress emerged from may wearing a dress, and the may reporting is actually a pivot away from a news story (her speech at the conservative conference). this is a story featured in “femail” so perhaps this shift is expected, but it’s still worth noting.

also, while the reporting around the cameron episode obviously lent itself to some visualization, none of the accounts i read came close to the voyeurism involved here in the mail‘s discussion of may (someone, prove me wrong!).

cameron’s genitals were evoked, but not imagined, whereas may’s body has, already in this article, been scrutinized and unclothed.

so it would be bad enough if it ended there. do you think it ends there?

IT DOES NOT END THERE!!!

the daily mail is usually high on pictures, short on analysis, so it’s rather inexplicable that we get 772 words more here. it is perhaps not surprising, by this point, that they are dreadful and incredibly derogatory towards women’s bodies in middle age.

YOU CAN’T HELP BUT WONDER WHAT WOULD HAPPEN IF YOU PULLED IT ALL THE WAY DOWN??!?!?!

for real, hasn’t this article just made you decide once and for all that if you’re ever in a position of power, you will dress like a man? it is so not worth it. already, if ever i had political aspirations, they have been scotched by this article, as has my desire to wear any of the dresses i own with exposed zippers.

because it wasn’t enough that we’d undressed the home secretary… TWICE. now we’re going to imagine her underwear.

ok, guys, we’re almost done and we’re in it to win it. on we go… i will summarize: her shoes are boring, but the color navy was a wise choice. why? well:

the thing is, while this is an ESPECIALLY egregious example, it is an example of something all too common.

it’s memorable because it makes explicit ideas more often delivered as subtext: women are always sex objects, older women’s bodies are gross, women can only be powerful when they embrace traditional femininity and, even when they do that, they’ll be scrutinized ruthlessly.

for the purposes of this article, i don’t care about may’s politics. i hope no one in my life ever looks so closely at my legs as the daily mail just did may’s. not just because we wouldn’t do that to a man, but because we don’t usually do that to human beings.

i was writing something the other day and can’t for the life of me remember what it was, but i did wind up thinking about the old platitude that “sticks and stones may break my bones but words will never hurt me,” which really winds up being a load of crock, no? words are horrible. words stick to the bone and leech in.

after reading this article on theresa may’s dress in the daily mail, i thought i’d have a peek at the comments, which is so often where one’s faith in humanity goes to die. in this case, it was mostly where people who don’t like the cost of high fashion went to complain.

but there was, in the midst of it, a comment that pretty much summed up everything i felt after reading this awful article:

4 thoughts on “the daily mail, what women wear and the way we write about them (emotions via britney spears)”