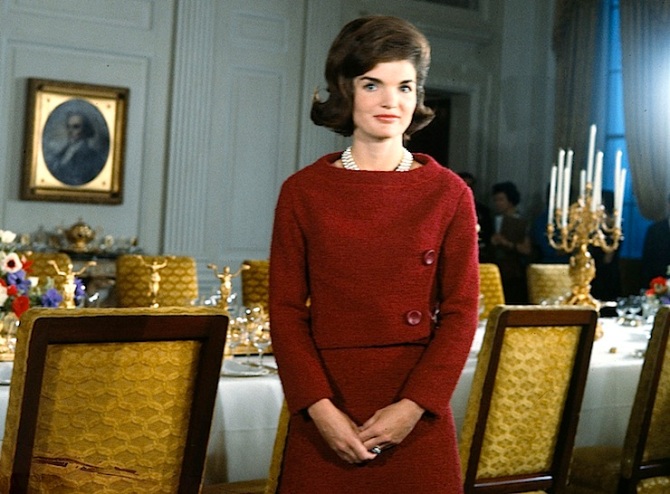 so there’s been a natalie portman jackie movie in the works for awhile, scheduled for release in 2017, and they’ve doled out a promo image to excite us all and prove they’re in production. 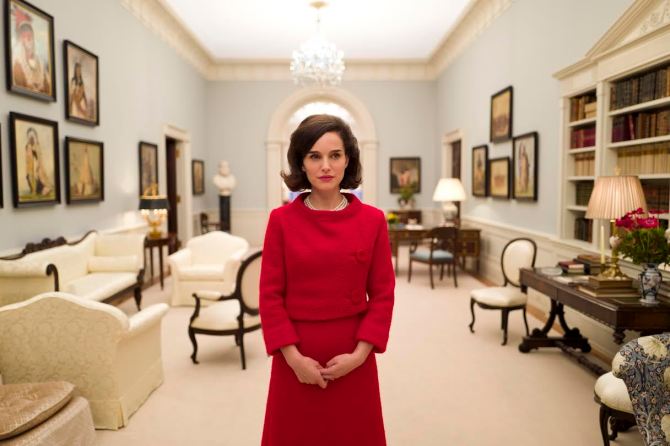 i’ve this complaint which always seems to come up- recently at dinner and previously here- in the context of the national nightmare that was naomi watts’ diana. i’mma call it When Hollywood Knowingly Gets It Wrong And Simply Does Not Care. meaning: hollywood elides a ludicrously easy historical fact, in this case a fact of fashion, for seemingly no reason at all.

possible case in point… possible because this is a film that has not been made and i have not seen it, BUT given it’s a film about the weekend after JFK was killed in november 1963, there’s something that makes no sense in this image above. namely, that it features an outfit from february 1962.

we know this was february 1962 because, y’know, HISTORY. 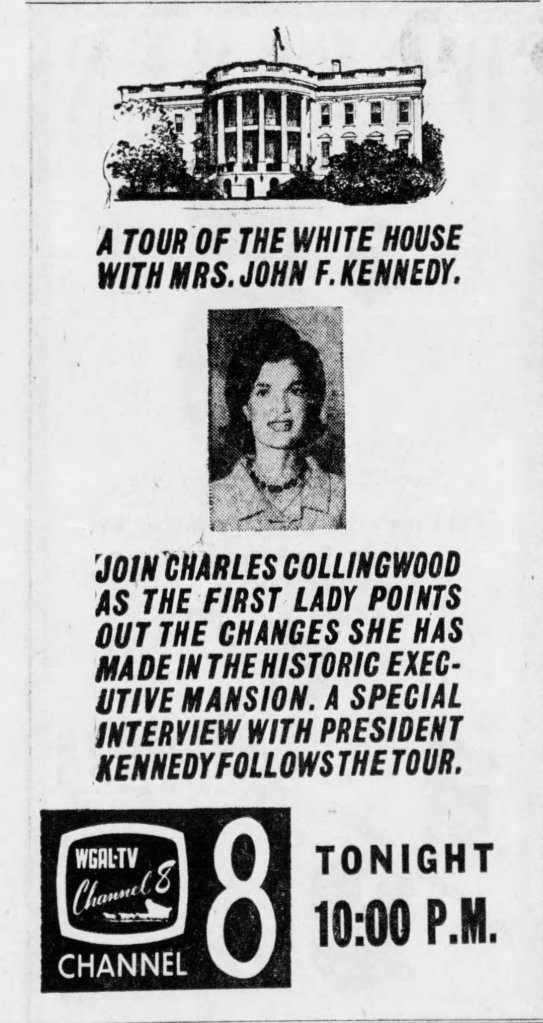 and also because it was central to the establishment of historical time in the opener of the second season of mad men.

given that it was february 1962 and this new jackie movie is set in november 1963, it seems unlikely that this costume is going to feature in anything more than a jackie-as-first-lady photo montage.

this is the extremely teeniest of teeny tiny points, but i want to dig in because i think this is a calculated choice and that there are actually a number of reasons for the red suit that illuminate Giant And Meaningful Cultural Things.

so it’s this red suit as opposed to, say, the age old standby:

or, given the context of this movie and the current cultural preoccupation with this garment, the pink suit.

the red suit of the white house tour does a number of significant other things.

it is also just as culturally freighted, although that is perhaps a fact of which we are less conscious than with the pink suit and the yellow dress.

it is, for one thing, what she wore while she spoke.

(no small feat given oleg cassini, in his sketch, doesn’t even give her a mouth.)

the white house tour was the first prime-time documentary intended to appeal to a female demographic and the first program where a woman provided a significant portion of the narration.

it’s early television so it’s HELLA AWKWARD. but the red suit she wears in it is inextricably linked to sound.

in contrast, the pink suit and the yellow dress are images steeped in silence and stillness.

in the red suit, she’s talking and walking- at least until her husband comes in the room.

at which point she slips into silence.

to speak is to have power.

the yellow dress and the pink suit have both come to signify innocence and the before times: before she was first lady, before he was killed.

but the red suit is power. pure power.

it is also, by virtue of being a public performance in a home, a provocative collision of the public and private. a public figure in a domestic- if not wholly private- setting.

i’ve written before (gosh, it’s beginning to feel like i’ve written about everything before…) about how we fail to see the first lady’s work as work and, in particular, how the white house restoration (which this program is publicizing) is not classified as work.

the red suit is cheery and merry and the broadcast is going out on valentine’s day so there are reasons for the suit’s color in spite of the documentary’s being filmed in black and white. but this is also power dressing.

she is clearly running this show.

and also its star.

this is why jfk’s appearance at the end is so depressing. because he seems to lumber in and take all the wind out of her sails.

suddenly this woman who has been dazzling us with her smarts, sits meekly beside her husband. awkwardly, they sit before a desk littered with rolled up treaties, uncertain what they are to do or how to be, together with the cameras rolling.

he is, notably, not in the room here.

which makes sense as it’s a movie entitled jackie and focusing on the weekend after his death.

we are also upstairs, in the private quarters of the white house, rather than downstairs in the blue room or some such.

i feel like that’s the point where half the room just went, oline, get a life! but HOLD IT. i’ve brought you to the buffet and now i’m gonna put it all on your plate.

my point is this: these images are in our culture and they are RICH. and there’s a reason these filmmakers have chosen the red suit for this one.

the red suit is powerful jackie, safe jackie, unsullied jackie. it is jackie at her administrative best.

as is the story of november 1963, though it is decidedly more grim and, therefore, less pretty as a promo image.

the story of jfk’s funeral- the story this film starring natalie portman is reportedly going to tell- is and always has been, in the real life jacqueline kennedy onassis’s life narrative as conveyed by the press and a zillion biographies, an administrative triumph.

it has been depicted this way from the very very beginning. even before life wrote up a dramatic recounting in its 6 december 1963 issue, the story of jackie at jfk’s funeral was already circulating with these overtones of congratulations and cheers for her administrative bravado.

and in a culture deeply ill at ease with death, in which emotional expression of grief was discouraged and prolonged mourning was taboo, this depiction makes total sense.

but it is a depiction. we are reading, here, a story. a narrative.

it is a depiction that, fyi, she DEPLORED, telling a priest a few weeks later, “i don’t  like to hear people say that i am poised and maintaining a good appearance. i am not a movie actress.”

because she was a human being. and this was her life.

which is not to say that her decisions did not shape the solemn pageantry. rather, it is a complaint that this is where the story stops, so that we never get at the human being behind those administrative decisions because we’re so blinded by the admin.

which, well, i honestly did not see this post going here, but WOMEN AND ADMIN. boom.

but i don’t think this is entirely about gender. in 1969, when america landed men on the moon and safely brought them back, time magazine wrote something to the effect that the moon landing appealed to the best of american values, and listed as chief among these “organizational skill.”

so we, as a people, seem to prize administrative ability more than most. and this seems to be one of the ways in which we tell stories about ourselves.

but what goes missing in all of this?

the story of jfk’s funeral as jackie’s administrative triumph overwrites the story of jfk’s death as the worst day of jackie’s life, a day which ushered in a period of profound grief, post-traumatic stress, and just really deeply shit times.

if they’re going to make a movie about jackie in the week after jfk’s death, i don’t want to see an administrative goddess, a woman who excels at the multi-task. i want her to be broken. not because i am a horrible sadist, but because i think she was. i think anyone would be.

and i do not think the extent of the horror of what happened to her will ever be conveyed through our culture’s ongoing celebration of the fact that, after witnessing a murder at close range, she put on one of the great funerals of all time.

a funeral which moved americans and made americans feel better about themselves.

when she died in 1994, there was a lot of talk about grace and dignity and about how she made americans feel during that weekend in november 1963.

she is, almost always, about america and her story has historically been and continues to be a part of the conversation america is having about itself.

what this is means is that we so often fail to imagine her humanity.

we fail to remember this was not a movie, it was her life.

years later, the poet stephen spender asked her what she considered her greatest accomplishment. she said it was that, after some bad things had happened to her, she remained “comparatively sane.”

that is a story we should tell.