in things i made a huge, big deal about and then never followed-up on, my boyfriend adrien brody debuted his Art at art basel a few weeks ago.

apparently nothing much else did as we didn’t hear a whole lot about it like that one time demi moore went or the time my forever love leo dicaprio (though i’m beginning to rethink that… stay tuned…) allegedly left a club with 20 women. which leaves me to assume art basel was a bit of a dud this year as all we got this go-round was some fahionz.

(though HOW DESPERATELY DO I WANT THIS GREEN VELVET BLAZER AND MATCHING SWEATPANTS???

because far too few people dare to see the fashionable potentialities latent within this: 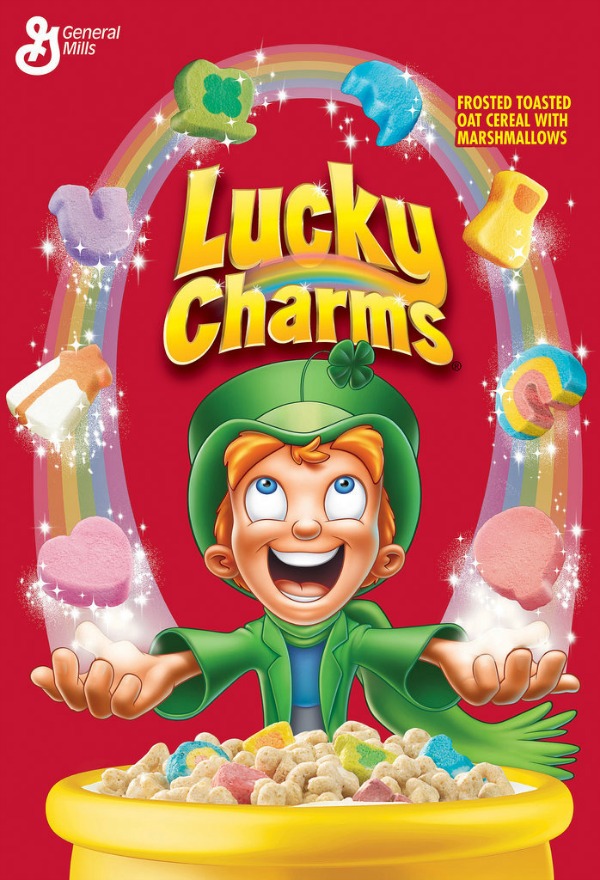 and, of course, my boyfriend adrien brody, artist, and his artistic debut. (see also: franco-ing.)

i swear i still cannot read the words “lulu laboratorium” and not see lululemon, but oh well. that’s a branding problem i’m sure they already know they’ve got.

his heart is in the right place:

his use of emoticons is stellar:

in a show on handguns and hamburgers, obviously only a revolver and a hamburger will do. and obviously there’s a PSA implicit within this advertising the need for a hotdog emoji so there’s that too.

i’m less enthusiastic about the flags of the world leather jacket: 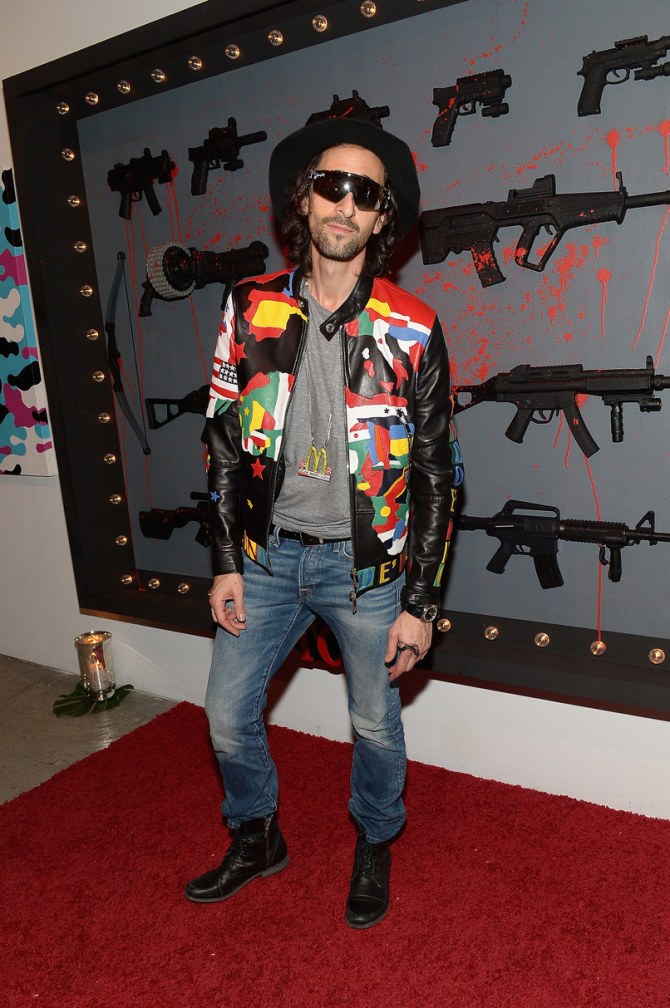 and the fact that my boyfriend adrien brody, artist, apparently makes people perform push-ups if they’re not carrying toy weaponry.

re: the art, there are glimmers of franco: 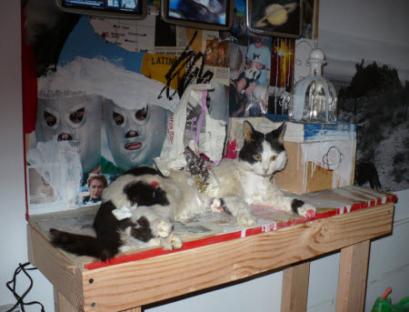 which is probably less to do with actual franconian influences in brody and more to do with a shared fondness for Things Strewn About the Art Area art.

as you will note, brody’s vibe is  minimalist mike kelley via breaking bad while franco’s is more art brut via anthropologie.

so, aesthetically there’s little comparison. if they are alike, it is in that they are celebrities.

newsweek‘s website SUCKS, and crashed so many times in my attempt to read the report on brody and art basel that i ran out of complimentary newsweek articles for the entire month, so i’ve not read the whole article but from what i did read it looked interesting. and they make the point that the whole set-up of art basel these days is celebrity-driven:

Both Brody and Zapata are part of Basel’s coterie of celebrity regulars. The art world they occupy is one that is closely tied to fashion and fame, less so one that is celebrated in museums. Brody and Zapata’s exhibition at Lulu Laboratorium—some of Zapata’s works are on display as well—is everything academics and certain New York gallerists have come to detest about Basel. The most important thing to come out of it will be a press release. Nevertheless, Brody is determined to isolate his career as an artist from his career as an actor.

this is basically an intersection of funnels. celebrities versus academics and curators: the artistic throwdown. 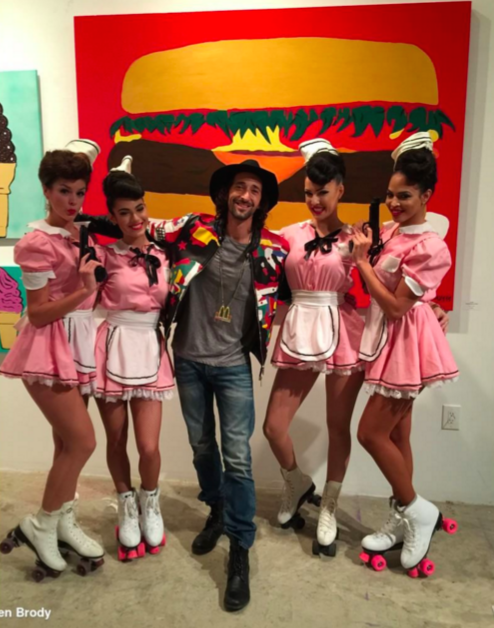 fyi, my boyfriend adrien brody, artist, wants NOTHING to do with his celebrity.

“I threw it out,” he says bluntly of his celebrity. “I threw it out today. It comes with me, obviously, as baggage, but I threw it out. Today, I’m ‘Brody.’ I asked them to take the name ‘Adrien’ off the thing. I’m Brody. I’m an artist. Obviously, I appreciate it, because there’s interest and I’m a known person, and there’s some curiosity as to what I should be up to—”

sometimes only ahhhhhhhhhhndrea will do…

so i say this from a place of love, but dear my boyfriend adrien brody, artist, you would not have a show at art basel were you not adrien brody, celebrity.

i mean, maaaaaaybe if you were somewhere else, we could make a case that this was all about the art, but this is art basel- the celebrity art event that brought us the rumor of my forever boyfriend leo dicap leaving the club with 20 women. so yeah, no.

dance with the boy that brung you, dude.

dear everyone among us who wants to be famous: this is your catch-22.

if you are a celebrity, your art may be incredible, but if your celebrity pre-dates it, then your celebrity colors the production/reception/consumption of said art.

drop your first name if you want, but everyone already knows who you are.

to pretend that those are the same story is to profoundly misjudge the reality.

this isn’t to say that my boyfriend adrien brody, artist, cannot be an artist or that he is not already an artist. (i’d argue if he’s making art then he’s an artist- it’s not the job title that’s up for debate but the quality of the artistic output.)

rather, it’s an acknowledgement of the impossibility of escaping one’s celebrity once one is a celebrity. the option of throwing out your celebrity, in reality, does not exist.

point 1: i’m using “you” in a general sense. i do not flatter myself that i’m speaking directly to my boyfriend adrien brody, artist, nor is what i’m saying applicable only to him. file this as another addendum to my “dear famous person” guides.

point 2: i would, of course, think this way because my understanding of celebrity is rooted in my being a biographer and my taking the view that celebrity is not an event…

as it is traditionally portrayed. but, rather, an ongoing condition… 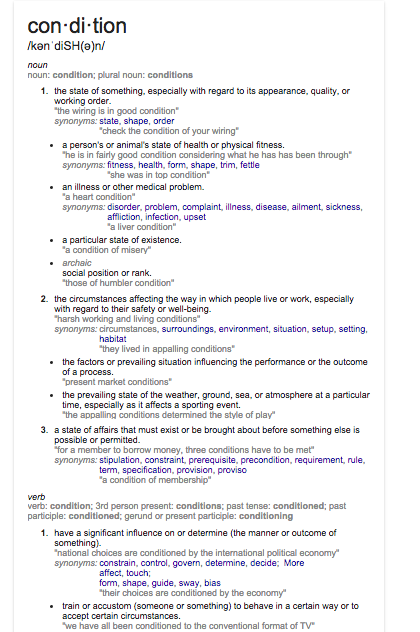 that, once it happens, remains fundamental within your life experience from then on.

we see this in the fact that, even if you lose your celebrity, your life is impacted by the loss, so that your having once been a celebrity is fundamental to your experience of not being a celebrity. in actuality, the loss of your celebrity can become the overriding narrative and make you a born again celebrity- famous for having been more famous before.

think of every television show and article premised on the notion of “where are they now?”

those narratives arise from the notion that these people were once celebrities. that these stories are written at all attests to the fact that they are, in some way, still celebrities and we still care.

so celebrity is not something one can throw out or check at the door. as my boyfriend adrien brody, artist, knows. let’s go back to the quote, which i have, so far, been grotesquely distorting so i could make the above point.

so he threw it out, but look how quickly the impossibility of that emerges here.

“It comes with me, obviously, as baggage, but I threw it out.”

is it just me or is that hella poetic?! 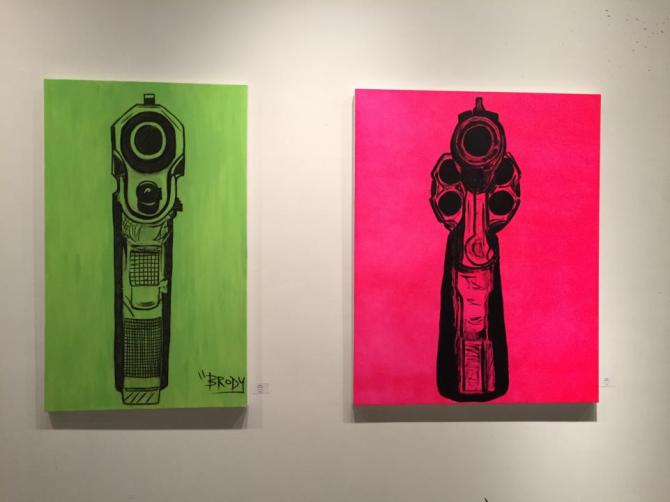 it’s an effort to take control of something over which one can actually have very little control.which is just as true of the condition of celebrity as it is true for the condition of being alive.

i roughed him in my analysis earlier because i wanted to make a point about celebrity. but it’s a point my boyfriend adrien brody, artist, makes very well himself here.

in writing about jackie onassis, i often find myself highlighting how she did certain things in spite of there being an easier option.

going out in capri, for example, when she knew there would be photographers and people everywhere and there was a rumor in circulation that her marriage was on the rocks.

it would’ve been easier to stay on the yacht, to hide away. but instead she goes out, goes shopping and gives us this immortal image of her eating an ice cream cone. 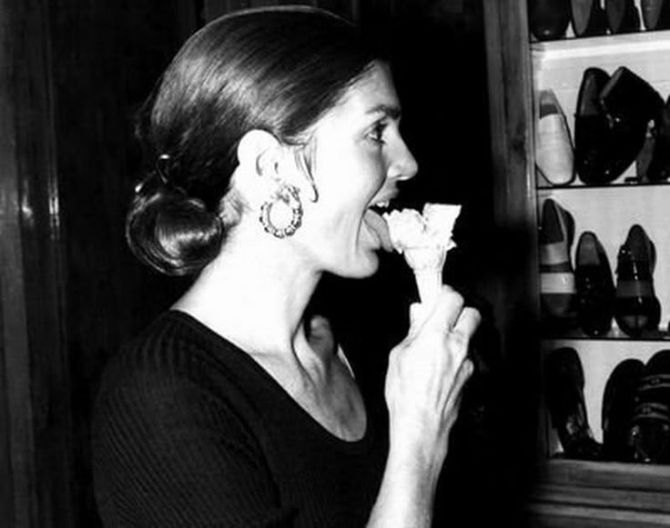 repeatedly, in response to her complaints that she was surveilled by photographers, people in the papers suggest that she’s made a choice and, if she really didn’t want the attention, she could live in seclusion instead of going out. as though that were a real option. as though any of us would want that to be our only option. because, as an option, that amounts to not living your life and that is deeply shitty.

so jackie went out and had her fun.

which doesn’t mean she did everything she wanted to do. at an exhibition of the photographer peter beard’s work, she reportedly took him aside and said she really wished she could do what he did. but that she couldn’t.

he took this to mean that she didn’t have the confidence because she knew that anything she did would receive ludicrous quantities of attention and criticism and she couldn’t bear it.

she felt she was limited by who she was.

don’t we all, at some point or another, feel limited by who we are?

as usual, i would direct us to one of the most insightful things i have read. EVER. no, it’s not adam gopnik’s “two ships”. it’s the line in the A.V. club’s 2009 recap of buffy, the vampire slayer, season 4, episode 1:

we are who we are. and a lot of life is about learning to live with that, but also to stretch the boundaries of it.

there are echoes of all of this the statement by my boyfriend adrien brody, artist.

so much that one sees in celebrity and art chimes with the experience of being alive and this is, i think, why celebrity is currently one of our culture’s primary art forms and it is why writing about celebrities is such an interesting and rich way to think about the way we write about lives and the way we live now.

it’s easy to laugh at a man wearing an ill-advised leather jacket and making a political statement about fast food and violence with stuffed animals and finger guns.

as an academic, as someone who wants/needs to publish a book, i roll my eyes ahhhhhhhhhndrea zuckerman-style, cite CELEBRITY PRIVILEGE! and say, my boyfriend adrien brody, artist, COME ON.

but, as a human being and as a biographer constantly trying to circle us all back around to the reality that celebrities are people too, i fiercely admire his chutzpah. not because it makes for a good story but because it seems a wise and interesting way to live.

we are all limited by who we are and by what has happened to us. how bold to try to stretch beyond that. how daunting to have the whole world watching when you do.

say what you will about his art, he took the risk. he did it. how many of us do?