the republican from illinois… the first member of congress of my generation…

reputed to be the fittest…

and felled by the downton abbey themed office on this day in history last year?

downton abbey is a little show that aired on the BBC from 2010 to 2015 and which aired in the US on PBS.

it was about days of yore and changing times in britain, the dismantling (somewhat) of the class system, and pretty people coping with change. (i use the past tense because it is over in britain… i know, i know, it is alive and ongoing yet for ya’ll in the US.)

it’s worth pointing out that downton abbey was set in BRITAIN, that the characters were BRITISH, and that some of them were vair vair wealthy. 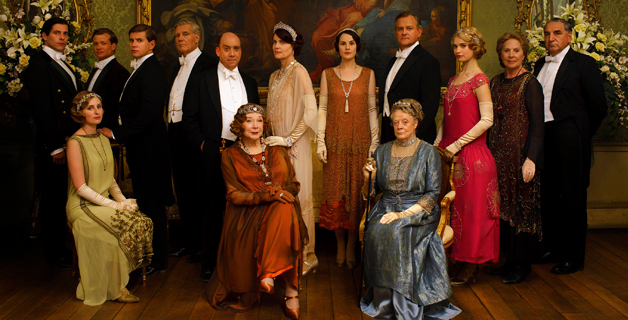 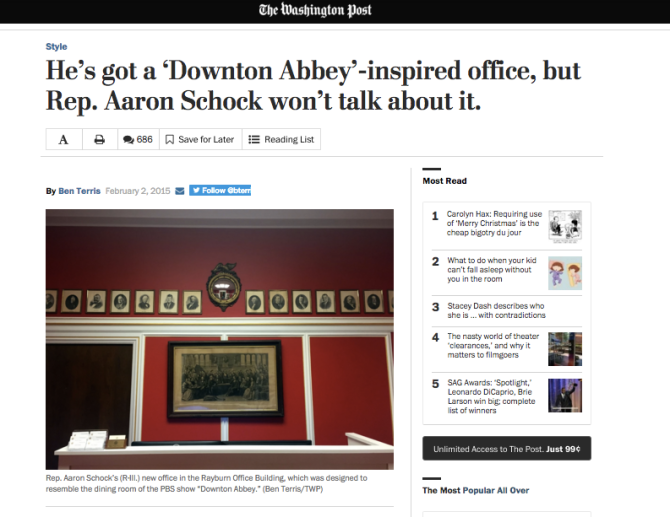 beware: out of necessity and interest, i am going to vastly oversimplify this story. to say that aaron schock was forced to resign because of his downton abbey office is much like saying richard nixon resigned because some people bugged DNC headquarters in the summer of 1972. yeah, you could say that, but actually about a slew of other things connected to bring out the resignation. it wasn’t just the one.

aaron schock’s downton abbey office was one of the things, but “financial malfeasance” perhaps more accurately captures the spirit of events (the guardian has a useful guide to instagrammed evidence).

though, let’s face it, “death by decor” makes for the more ludicrous- therefore, BETTER- headline.

the designer, annie brahler of illinois, seems to have been pleased with her work, for it is she who led ben terris on the tour of schock’s office which led to the displeasure of schock’s communications director and the resulting article in the washington post on schock’s staff’s squeamishness about having the newly done up downton decor photographed. (note how this begins to sound like a children’s book…)

there was debate about schock’s sexuality prior to the downton development. the aforementioned belt and abs being the primary evidence in a narrative that the downton office appeared to further support. and much of the press coverage in the wake of the revelation of the downton decor had a certain wink-wink-nudge-nudge vibe re: the campiness of decorating one’s office in the style of a soap opera.

what intrigues me, however, is the clash of culture: the notion of an american congressman decorating his office in british style.

much as we love “the special relationship,” this would seem a bit close for comfort.

a situation in no way helped by the fact that the firm doing the decor was literally named EURO TRASH.

consider the optics: a congressman from middle america gets his office refurbished for free in the style of a british soap opera by a company peddling the european sensibility.

there are many problems within this story and schock appears to have done a number of financially malfeasant things, but i think the key to the joke here, the reason why this downton story is so especially ridiculous, is because it is downton. and, as a result, it looks so inevitable, so obvious that this would go wrong.

downton abbey is, first and foremost, a soap opera. a british soap opera.

and so to decorate one’s office à la downton is kinda like if margaret thatcher had decorated her digs à la guiding light.

i know, i know, it is actually nothing like that but i really wanted an excuse to mention guiding light and evoke the spirt of alan-michael spauling and his love triangle with eleni and frank.

(if asked to pinpoint the moment where his instagram jumped the shark, i would have to cite the above. and fyi, aaron schock’s downton abbey office appears to have been the nail in the coffin of aaron schock’s instagram….

which is sad for a number of reasons, one of which is this: 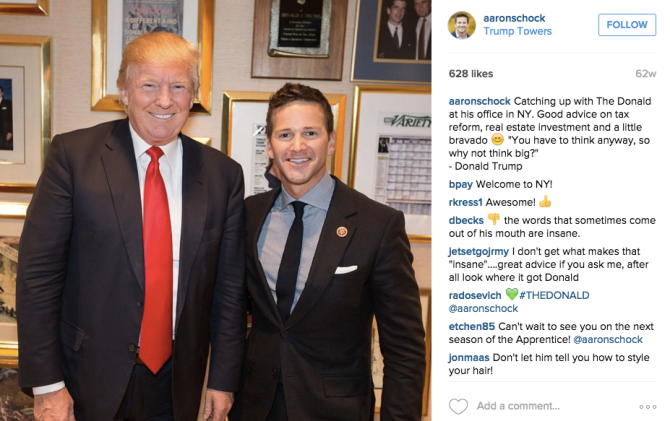 there’d be an almost jamesian element to this story were it not already set in america.

naive, trusting american undone by european decadence. let us never forget, the decorating company was literally named EURO TRASH. just the reality of how bad that sounds should have sent off warning bells with someone on his staff!

perhaps there’s a musical to be found in the contours of this story… a hamilton-esque revival of the aaron schock story wherein aaron schock is isabel archer and annie brahler of euro trash is the scheming madam merle. alas aaron as isabel had no ralph touchett.

i’m reminded here of the brouhaha over jackie’s francophile tendencies. decor drama, in DC, is nothing new.

but jackie was wizened and circumvented this brouhaha by decorating the white house in the style of jefferson- great american president, lover of all things french.

decor can be done diplomatically (ie. sneakily), with a nod to one’s own culture rather than rubbernecking the atlantic.

surely there was a famous illinoisian who spent some time in britain. surely schock’s office could have been decorated in the spirit of that’s man’s library or some such, and then problem = solved.

alas, they looked to pop culture and soap operas rather than History and america. there were ways around this. it needn’t have been so bad.

financial perspicacity being, obviously, step one. but a little historical research and the problem of britishness would’ve been elided as well.

if there’s a moral to be had here, it’s probably that it would behoove us all to be more wary of red rooms as they seem to get everyone into trouble. though, i guess, if we’re speaking of historically red rooms, we must remember: it could also have been much worse…

One thought on “a brief, nostalgic look back on the downton abbey decor-related downfall of congressman aaron schock of illinois”