i am analyzing a culture in which it does not feel safe to write about the feelings i have about this woman (for the record, i second all of this), and i am also analyzing the feeling that i am not entitled to these feelings and what that tells us about our culture. 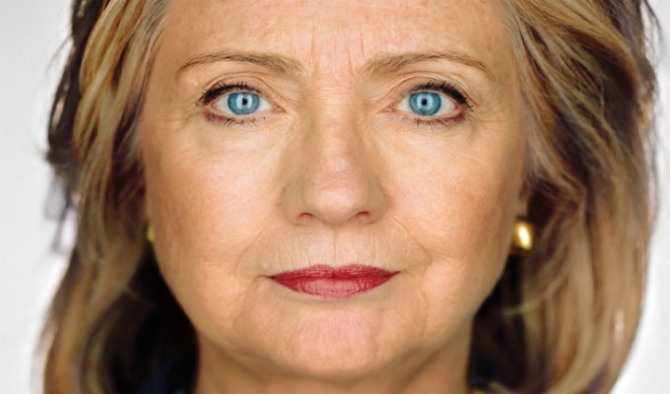 i’ve written before about how hillary hurts.

i’ve written before about why i believe that is.

i’ve repeatedly said i do not want to write about hillary clinton.

i’ll also acknowledge that i usually wind up doing what i say i absolutely know i do not want to do.

to crib a line from ecclesiastes: what has been will be again, what has been done will be done again; there is nothing new under the sun.

you guys, NONE OF THIS IS NEW. it is simply not possible to over-exaggerate this.

THIS IS NOT NEW. it was new-ish in 1992, MAYBE. maybe you could make a case for that, but not now. in spite of our cultural amnesia, it is most definitely not new now.

before the emails, before benghazi, before instagram, before 2008, before lewinsky, before the widespread use of the internet, before whitewater, before the death of vince foster, before healthcare, before the travel office scandal, before her husband was even elected, this woman was hated.

and this was, as far back as 1992, associated with her having a voice and having opinions. 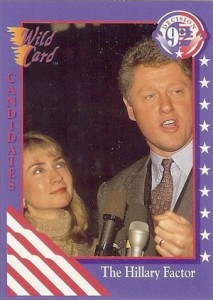 this has to do with, i believe, the fact that something deeply strange was happening with feminism at the time. something i’m probably going to spend the next few years unpacking around tonya harding and hillary clinton, but which would help explain why HRC is now loathed with equal vigor by women on opposite ends of the political spectrum.

fyi, so that i can stop having conversations like this one…

feminism is about equality, not superiority. not man-hating and bra-burning. it really is just that women are the equals of men and the acknowledgment that they are often not treated as such.

there’s confusion now around this definition. a confusion that is also a problem which- SURPRISE!- we’ve inherited from the 90s.

“many women have come to see the feminist movement as anti-male, anti-child, anti-family, anti-feminine,” the new york times’ political columnist william safire quoted the novelist sally quinn as saying in 1992. were that not damning enough, quinn is alleged to have expounded that these ideologies were served up “often with overtones of lesbianism and man-hating.”

but, readers need not lose heart, for, safire suggested, if “macho feminism” was dead, there was a “new natural womanism” of “lasting partnership and personal fulfillment,” as embodied by hillary clinton and marilyn quayle.

at the dawn of 1992, even safire—a nixonian conservative—was optimistic for this “new” feminism.

four years later, in a times op-ed entitled “blizzard of lies,” safire would brand clinton a “congenital liar.” a compelling case was being made, he wrote, “that she is compelled to mislead, and to ensnare her subordinates and friends in a web of deceit.”

“she had good reasons to lie,” safire contended, “she is in the longtime habit of lying; and she has never been called to account for lying herself or in suborning lying in her aides and friends.”

i, of course, remember reading this as a girl because the word “congenital” seemed so shocking to my prudish 15-year-old self. it seemed especially profane applied to the first lady. 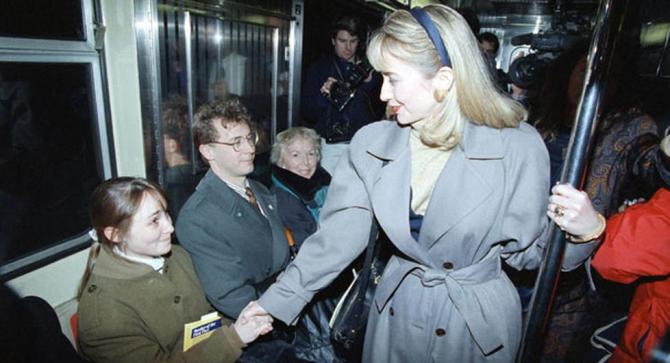 in june 1994, bill clinton complained to newsweek’s eleanor clift: ‘what’s really amazing is that if [hillary] weren’t my wife, people would be throwing garlands at her feet, probably, for all the stuff she’s accomplished. but if you’re somebody’s wife, you’re still not supposed to have a mind.”

a great quote. and one i’ve always assumed would probably be true. but now i wonder… is it not just that she was his wife but that she was a woman? would not being bill clinton’s wife have been enough? does it really have anything to do with him?

would we have hated her regardless because she happened to enter public life at a time when we didn’t want women who spoke their minds? 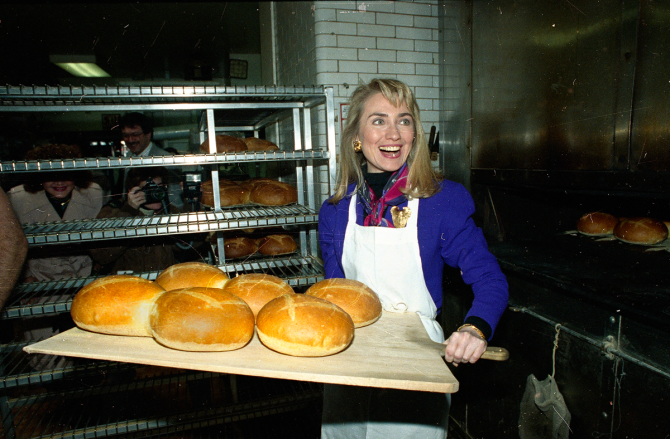 “no other wannabe first lady has caught so much flak as mrs. clinton while still on the campaign trail,” the syndicated columnist sandy grady wrote in april 1992, a full three months before her husband became his party’s candidate. “you hear sidewalk critics call her the ice queen, the school-marm, the lady legal eagle, the fem radical, the yuppie wife from hell.”

it was a furor he found puzzling, because she seemed to him the realization of all the aims of the women’s liberation movement: “isn’t someone who’s a yale law grad, activist lawyer, campaign partner, wife and mother supposedly a paragon of the new american woman who has it all?”

“who do they want,” he wondered, “another mamie eisenhower?”

i would argue, no…

for, in the early 90s, the jackie nostalgia is already percolating.

in a 1990 article on the return of the jackie kennedy look in fashion, the author speculated that the pillbox hats and sleek shift dresses of jackie’s kennedy days were evocative of “what many american women have worked hard not to be in the intervening 30 years,” and noted that their current vogue signaled that this was “what some are yearning to be—or seem—again.”

she’s referencing a peter lindbergh spread in the march 1990 vogue, featuring helena christensen (who bore more than a passing resemblance to JKO).

this wasn’t limited to the US. in september 1990, italian vogue featured a similarly JKO-ish homage. 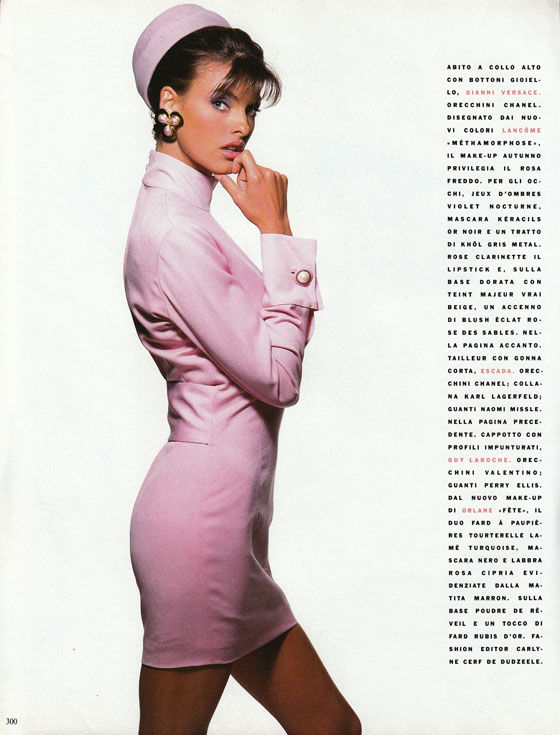 so JKO nostalgia was already in the culture and, with JKO’s death in may 1994, this yearning would move even more vividly to the forefront at a time when HRC was under fire in the whitewater investigation. (fyi, JKO doesn’t get out of this unscathed, a circumstance to which i will return towards the end.)

my point here is that HRC came to public prominence at a time when there was A LOT ‘O CONFLICT amongst women about what kind of public woman they wanted and also a lot of anxiety in the culture more generally about what kind of a lady hillary clinton was.

it is perhaps significant that hillary clinton has never been portrayed as being any of those things.

what she has been, for over 20 years now, is a rorschach.

in particular, i would argue, a rorschach for women in which we consider the problem of “having it all” and the reality that we cannot.

i’ve written before about inequalities in the work place, double-standards that persist to this day. the other day, a friend sent me this article on yes men and no women and said that, combined with my article on women and admin, it pretty much provided a summary of her whole work life.

THIS BROKE MY HEART.

wherein i stumbled upon this:

which, well, good for denise graveline fulfilling a need, but that this should be a need is heart-breaking.

as is the fact that it is about “moderating” panels rather than featuring on them. to moderate a panel is admin. to be on a panel is to be identified as an expert, and to be the star. that there, my friends, is inequality.

HRC was aware of this endemic inequality and women’s struggle to cope with it and she hoped, in 1992, that her story might get a conversation going to mitigate it and bring about change.

alas, over twenty years later, we are still struggling to have that conversation- as we see in the aforementioned yes-men/no-women article from the cut:

and we are still using hillary clinton to do so.

the fate of the name “hillary” seems evidence of our ongoing wariness as regards this.

as most names tend to drop off. but it is provocative that hillary dips as it’s on the rise, and that the sharpness of its decline is as precipitous as that of barack.

two years ago, during a trip to paris and a long weekend after, i began writing an article for an academic journal on jackie onassis’ “silence.” about how she was not silent but, when she died in 1994, she was memorialized as such and her “silence” was fetishized to such an extent that many people now believe she never gave an interview.

this article is a huge ‘ol mess, and it seems unlikely to ever see the light of day. but what it was getting at, though i did not know it at the time, was my continuing anger over women’s voicelessness in american society.

it’s an anger stemming from my own experience of the 90s and the resulting confusion.

[trans: When XXXXXXX and I spoke today she asked me if I believed in equal rights for women. I said that I did. She seemed quite shocked by my reply. She told me women should be submissive to their husbands. I didn’t say anything else but I now wonder if I’m for equal rights. I’m certainly against sexism and the abuse women receive because of their sex. I don’t think that is fair. But I do think women deserved the right to vote, hold property, be in Congress, and have opinions. And I do hope that I shall live to see the first female president. I guess I am a feminist, but I don’t see anything wrong with that unless one takes a violent approach. I hope my views weren’t out of line. I would never actually express them.
F.C.]

my continuing anger over having grown up in a culture where, to this day, my voice is problematic, as is made very clear by the way we talk about the most visible woman in the land:

fun fact: jackie’s voice was controversial too. “why would a married woman with two children wish to dress and talk in a 13-year-old ‘kittenish’ manner?’ one viewer asked the el paso herald-post, after the 1962 broadcast of the white house tour. “to do so, as an average housewife, would be ridiculous; however, to do so in the white house is disgusting.”

when jackie onassis died on 19 may 1994, she was hailed as the greatest first lady in history but her voice remained the only dissonant note.

“only her voice, whisper-thin and high-pitched, was at odds with her regal bearing,” the philadelphia inquirer observed, an especially damning judgement in light of the fact that “even her incessant smoking didn’t mar her noble image.”

i would contextualize that will the contemporary attitudes towards hillary and say, OF COURSE her voice was bound to be problematic in a society that wanted silent women.

and here we are, with hillary now. a woman who has been speaking in public for over 20 years and whose voice we do not like. “shrill,” they say.

not to keep driving everyone back to my “women and admin” post, BUT, as i wrote then…

i wonder: is the worry of being shrill a feature of the male experience?…

i am less afraid of sounding strident than sounding shrill because i assume stridency is a distant country whilst shrill is my natural register.

true story: i still hope to live to see the day the united states has its first female president.

another true story: because of all of the above and our lack of understanding about it or awareness of it, i honestly do not believe that i will.