2016, ya’ll. i’m in paris at the moment and wanted to cobble together a parallel to p.t. barnum so i just googled him and was reminded that he was “un entrepreneur de spectacles américain.” which sounds about right for our current times. DE SPECTACLES AMERICAIN!

anyhoo, a funny thing has been happening with obituaries this election season. have you heard/seen?

while i don’t know that i would go so far as to call this a “nationwide movement,” it does seem to be an interesting election season trend emerging in obituary composition. 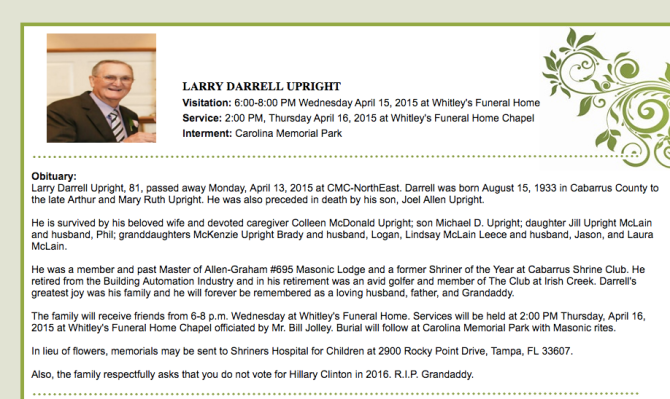 perhaps this is what comes of front-runner status these days, as there appear not to be similar requests re: cruz, rubio, kaisch, or o’malley.

and, quite bizarrely, the obituary has emerged as a political weapon.

in nevada, the day before the primary, a campaign volunteer reportedly tried to publish an obituary of hillary clinton and got in a world ‘o trouble with the secret service. 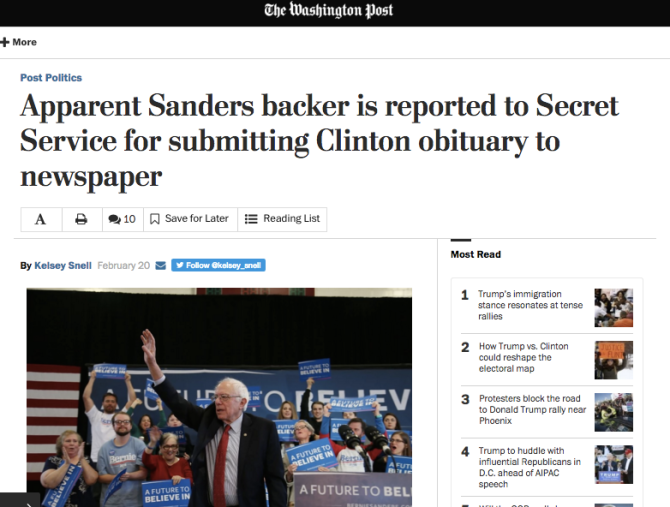 CNN has characterized the obituary phenomenon as “dead man talking”… 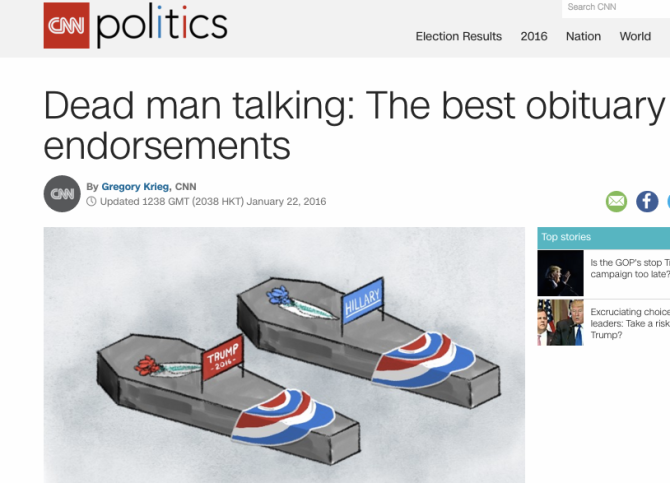 The coffin has long doubled as a pulpit, with candidates speculating on the erstwhile electoral preferences of departed dignitaries. Today, though, the deceased are becoming more adept at leaving their mark on the political scene.

but i think “dead man talking” is inaccurate (+ sexist!) and it’s a phenomenon perhaps better characterized as “dead person voting.”

because she “liked to bake and made a mean peach pie” and “In her alone time, she never missed an episode of ‘Days of Our Lives,’ was an avid reader of The Independent and took in about every piece of political commentary she could find.”

as is traditionally the case in this unorthodox development, the political message occurs at the end of the obituary. however, unlike most of the other examples- which say “please don’t/do vote for…”- lewis’s obituary explicitly includes the reason for the request:

“she is surely disappointed she won’t get the chance.”

we see this same sentiment in the statement from one of alba keus’s daughters, who said, “We just thought that this was her last way to get her vote in.”

and so the obituary becomes a way of participating in an election one will not live to see, a way of compensating for a vote lost because one did not live till november to cast it.