and now, for some frivolity!

come, join me in the magical wonderland of this music video…

déjà vu anyone? because uHHHHHHUMUMMMMMM…

i mean, it’s not frame-by-frame, but, cinematically, it feels rather homage-y, non?

because, let’s be real, there is nothing hip about this dude.

except that he’s très très square. even when he is clearly trying to be hip.

that shirt! those pockets! ALL OF THE DENIMS. my god.

so, the narrative here seems to be unfolding in three locales.

a chainlink fence, possibly around a baseball diamond or a playground:

obviously in that hour of the day when the sun is at its brightest and red heads would be advised to stay indoors.

an underpass in the dead of night:

and the worst wedding reception of all time: 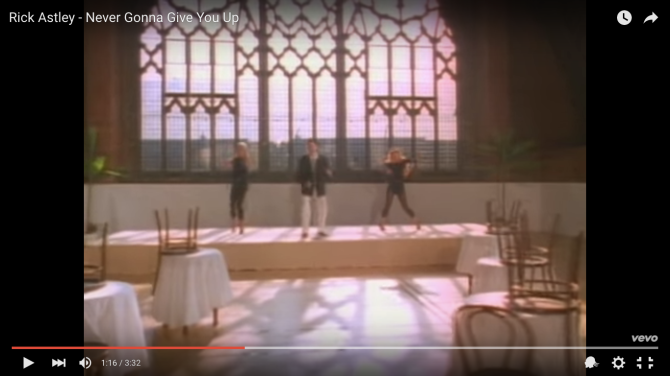 our protagonist is, of course, rick astley/james hewitt:

he’s thinking of “full commitment.” he wants to tell us how he’s feeling and promises to make us understand.

for serious, i do not think he makes a convincing case. in giant part, because- in a 3 minute and 32 second song- he promises he’s never going to let us go.

our protagonist is accompanied by his two blonde dancing lady friends. 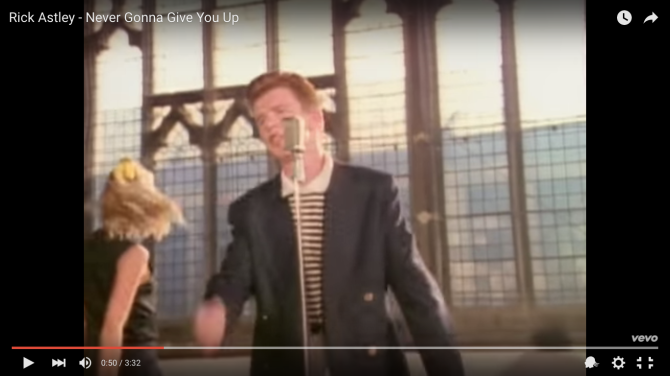 since he pays absolutely no attention to them and doesn’t interact with them in any way, i’mma surmise that they are not the objects of his affection and promises.

i do not know.

though- after careful arm movement analysis- i hypothesize that it belongs to the breakdancing blonde man who appears in the underpass a minute later and busts out some pretty serious pirouettes.

thus putting to shame the moves of the aforementioned blonde women, who are essentially doing that dancing that women do in TV shows when their character has one episode wherein, because she’s briefly flirting with the idea of becoming a model, she does a photo shoot montage. 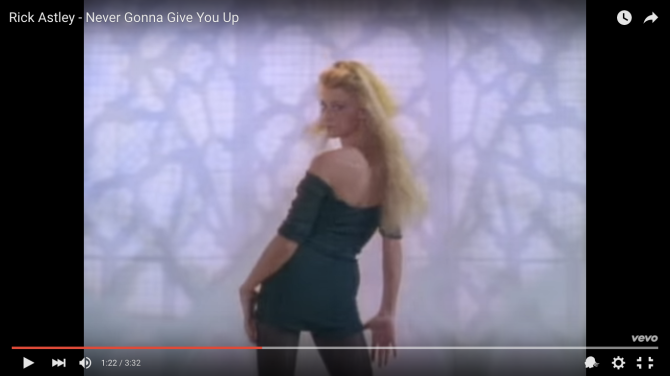 as opposed to the moves of underpass blonde man and this guy:

i’m honestly not sure how we get from here…

because this is a fairly low-energy song and jumping splits seem rather overly aerobic. but, yo, here we are.

even he is confused: 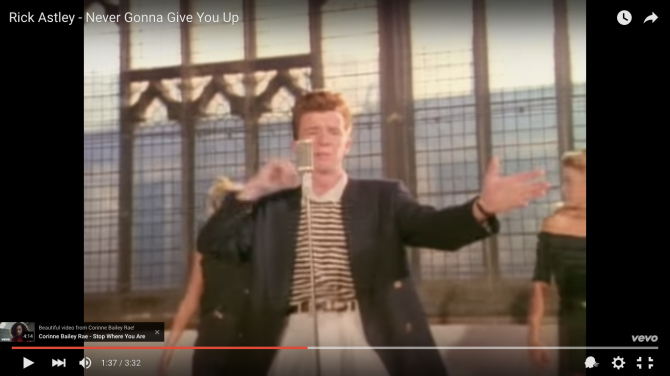 he swears he is never going to give us up or let us go or run around or desert us or make us cry or hurt us or tell a lie or say goodbye.

what’re the odds that the one thing he is gonna do is make promises he can’t keep?

you guys, i don’t even know… 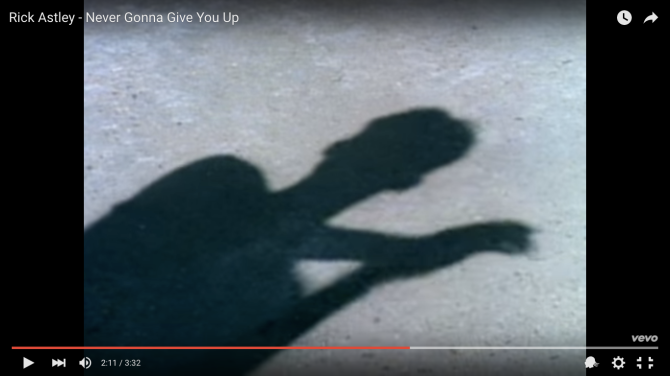 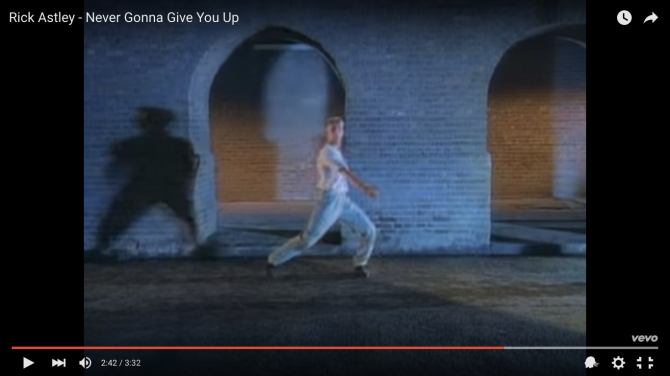 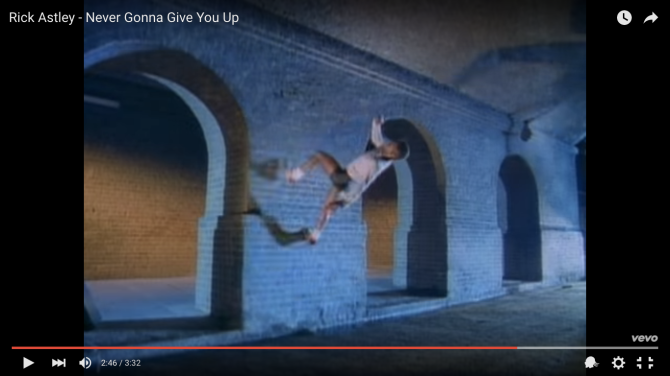 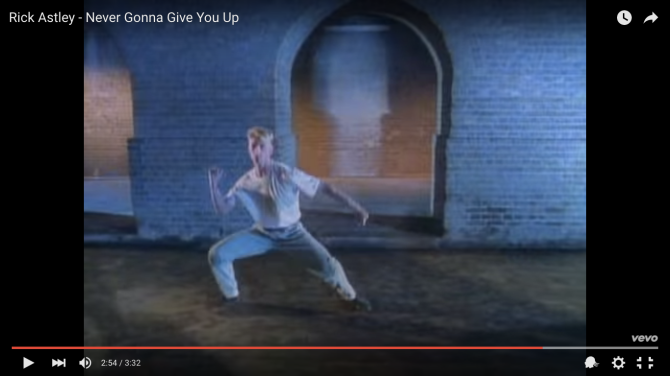 and i don’t think he does either.

fyi, lyrically, this is all kinda hella creepy:

We’ve known each other for so long
Your heart’s been aching, but
You’re too shy to say it
Inside, we both know what’s been going on
We know the game and we’re gonna play it

you know how he’s gonna make us understand? by beating us into submission with this chorus.

he is NEVER going to give us up.

fortunately, this is a 3 minute and 32 second song, so time is not on his side. 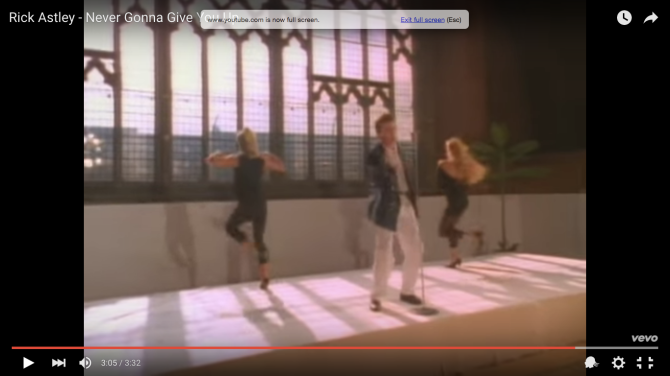 fyi, the david silverness of his dance moves is INESCAPABLE.

as the music fades out, he is literally saying he will never say goodbye or let us go. LIES, man. lies. 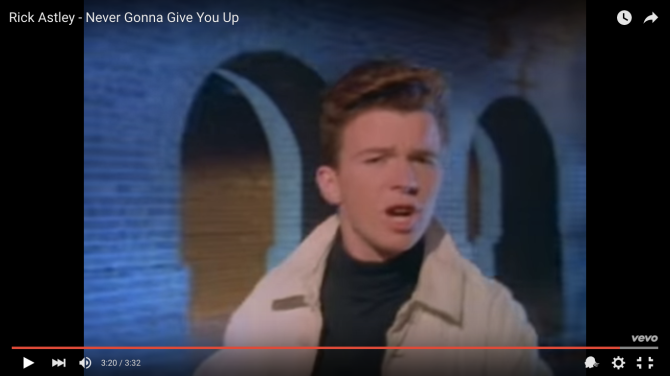