lo, friends, welcome, welcome! yet again, here we are, gifted with a dazzling study in the daily mail‘s narration of photographs of macaulay culkin. the tenuousness of this article’s need to exist is, i think, made clear by its mention of mila kunis- whom i had truly believed we all got over.

but first: WHAT DO THESE PHOTOS REVEAL?!?!

i quite like the level of detail here. because we needed to know that he held the cigarette in his right hand.

i also quite like the tension evident in the use of the word “unintentionally.” as though, had he realized he would be photographed and his red nail polish might be on show, macaulay culkin would’ve opted to wear gloves.

is it even possible for the wearing of red nail polish to be “unintentional”? unless someone secretly painted your nails in the dead of night whilst you slept (which would be creepy), i’mma go with no.

when one wears red nail polish (or any shade, for that matter), it is intentional.

when one leaves the house wearing nail polish, one cannot be said to be “unintentionally showing off” said nail polish.

i leave the house every single day with painted nails. #showoff 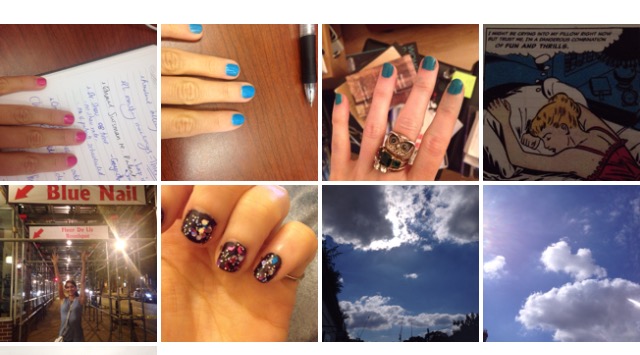 of course, the point being made here is that culkin is a man and men stereotypically don’t leave the house wearing nail polish.

the article’s title highlights a number of tensions (today, i am all about tension evidently).

the tension between the exceptionally rare and, therefore, exceptionally interesting inclusion of his age in the headline- an inclusion which lends the thing an obituary vibe and begs the question of what point is being made here about being 35. is 35 too old to rock a man-bun and red nail polish? does the verb “rocks” stem from his being 35, a circumstance which makes a man-bun and red nail polish especially exotic? is 35 too young to retire? are we meant to be shocked that macaulay culkin (kevin arnold! [correction: bahhhahhahahaa! kevin MCCALLISTER]) is, in fact, 35? and, therefore, reminded of our own proximity to the age of 35 too?

then there’s the tension of the fact that cigarettes will kill you. and it is 2016 and we should all know better (though we don’t always).

but note also the juxtaposition of the “man-bun” and the “red fingernail polish” and the anxieties around gender performance.

i’m being deliberately obtuse but i do question whether the aptly named DAILYMAIL.COM REPORTER…

understands how using nail polish and having hands and being seen in public actually works.

or am i just expecting too much from someone named DAILYMAIL.COM REPORTER? hmmmm…

this is an article based on an unusually skimpy number of photographs. only three new ones and an archival shot from last month from a series i didn’t write about then because it was even skimpier. (though it did look, in the pictures, like culkin was holding a burrito to his face, which i rather loved at the time and have occasionally recalled with glee in the intervening month.)

so here we’ve got a whole article based on the daily mail‘s need to publish three pics for which they have paid. the narrative, as you can imagine, is well-crafted.

truth: if this were an article about a woman, we would be given a dozen links to buy all of these things.

alas, i do not know where to get mac’s polish.

alas, i do not know where to buy his boots.

they are polished and filled with cigarettes and time.

this is where, having run out of ways to describe these three photographs, the article pivots…

you know what does make a daily mail article? a stroll through a little land i like to call Things Macaulay Culkin Has Said And Done In The Past.

gang’s all here yo:

thingz previously said in interviewz with other publicationz…

no heroin rumors, taco bell or hudson news bag, but then i guess it’s time we all moved on.

to give credit where credit is due, DAILYMAIL.COM REPORTER opted to end on the best possible line, giving mac the last word and letting him speak for himself:

i do wonder sometimes if perhaps the daily mail cares too much. about everything and everyone, in entirely too much detail.