so i have been putting this off for daaaaaaaaaaaaaaaaays because, HOLY MOSES… i don’t even know.

i mean, that has captured your attention, non? you are RIVETED, right?

so this headline pretty much says it all, yeah? it is three sentences long, so it’s essentially a paragraph and you can fit a lot of (1) info and (2) emotionz into a paragraph.

ok, not really “sentences” per say since “Her cynical manipulation of JFK’s legacy” doesn’t exactly stand alone. (true story: this blog post is going to contain many things that are, technically, not sentences, but which we’re all going to pretend stand alone.)

why is “brothers” in all caps?

who the hell is this peter cook person?

and why does the daily mail keep trying to make him happen in jackie’s posthumous love life?

um… is jackie a “blockbuster”?

why is there no “the” before truth?

and, what in god’s name is occurring in that last exclamatory clause?

so we have “cynical manipulation,” “rumored affairs,” “a blockbuster,” “sex and scheming” and whatever it means to have “the O put in jackie!”

something i’m quite sure no one on the internet ever wanted to see. alas, here we are.

for the record, i hate everything about this headline. i hate that JFK and his BROTHERS all appear to be victimized whilst jackie is cast as a cross between anastasia steele and lady macbeth. i hate the mail‘s inability to adhere to any sort of conventionally acceptable grammatical structure and i cannot stand the exclamation point.

people: this headline was the article’s high point.

here is what this article is allegedly about:

for everyone out there like me (dr. jackie, mind you) wondering who in the hell is this peter cook? peter cook is a british “comedic genius” (so sayeth the mail) with a posthumous sex life all of his own.

(i look forward to the day when posthumous sex life intersectionality becomes a thriving academic field.)

long story short: cook died in 1995. in 2009, someone he was in comedy with in the 60s (alan bennett) made what the daily mail, at the time, called a “surprising claim” and said he thought jackie and cook had an affair.

how did this “surprising claim” sound?? 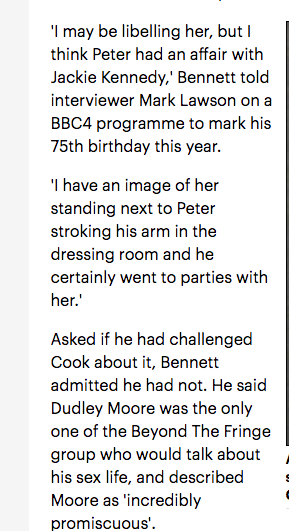 while i appreciate the journalistic restraint in not linking jackie to dudley moore, just as a rule of journalistic thumb, it seems fairly safe to say that when your source begins a claim with “i may be libeling her,” there may not be much there there.

and, for the record, cook’s widow thought not… 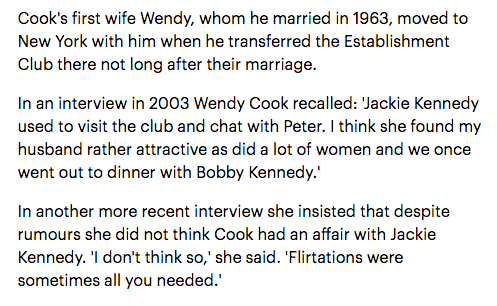 “flirtations were sometimes all you needed” must be the motto of the club for people who make ambiguous statements about dead celebrities’ sex lives. because flirtations are clearly all you need.

wherein the “most compelling evidence of all that Peter once bedded Jackie, too” stuff is that cook later told his wife that he had had an affair with lee radziwill. and, the author concludes, because jackie and her sister were “viciously competitive” and “brought up in the same careless social whirl,” surely they would’ve both slept with cook.

this article opens with the opening of jackie- a film about which my primary criticism was that it is a film about the distortion of truth to make a good story, and, as such, the ways in which it distorts the truth for the sake of the story are deeply problematic.

here, the mail‘s preoccupation with the film is mercifully short, but its pivot to the “rumours that have been rumbling for years [which] have resurfaced that she had a string of celebrity affairs” is sloppy.

who apparently wasn’t of enough consequence in jackie’s posthumous sex life for me to have written about these rumors before. though he does appear to have been in the mail‘s standing tally of MEN ALLEGED TO HAVE SHARED JACKIE’S BED.

which is a problem not because people shouldn’t sleep with other people but because these stories are presented as News when they are, in fact, second and third-hand biographical whispers. the evidence is flimsy. the claims are just that: claims. albeit recounted as institutionalized truths.

this article seems to mimic the collagiastic, post-modern approach of jackie in that we swing wildly between unsubstantiated claims and commentary on the film, prompting an intellectual whiplash where one feels paragraphs must be missing.

can i get an amen? 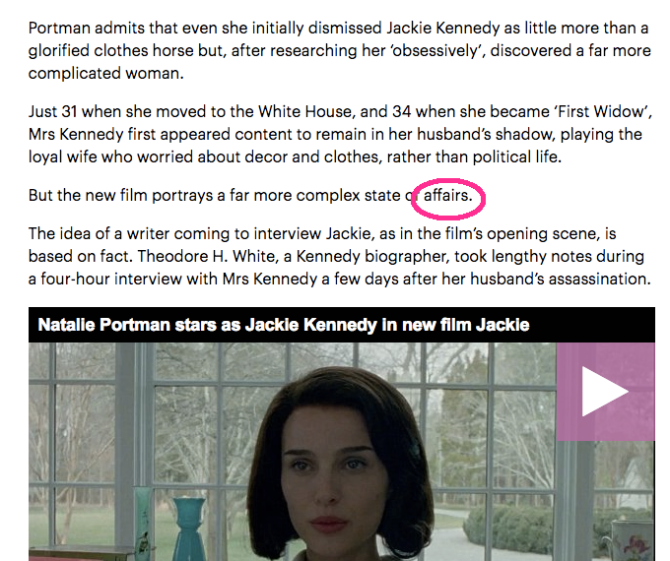 you can read the whole article if you want. i’mma pull my own pivot now and focus on whatever the nonsense is that is unfolding towards the end.

and about these tapes…

a line which elides A WORLD OF NUANCE and “bitter and twisted” conniving from j. edgar hoover (which you really should go read about here.)

yo, feminists were aggrieved too! 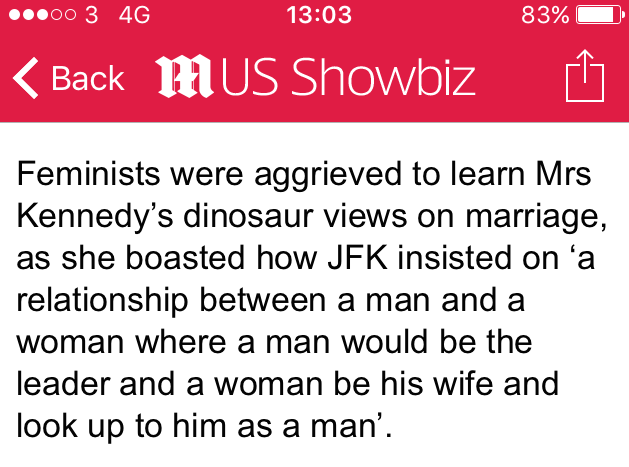 because a wealthy white woman, who just saw her husband murdered, spoke to someone in 1964 and expressed ideas shared by many, many people in the 1964.

we are of our times and we (hopefully) move beyond our times. that doesn’t always look pretty in retrospect. how embarrassing does everything you believed in 1992 look now?

the mail seems to think we are all always the same and more and more information is just uncovered re: our general nastiness. at least that is the case with jackie.

file under: THINGS PEOPLE WERE COMPLAINING ABOUT IN 1961. 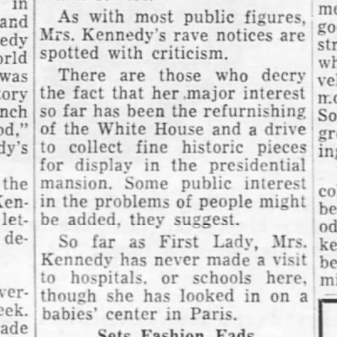 are you noticing what is happening here? we have slipped into Jackie: The Greatest Hits.

jackie made christopher hitchens and the feminists mad! the historians say jackie wasn’t a perfect first lady like we thought! jackie is said to have had affairs with oodles of people! 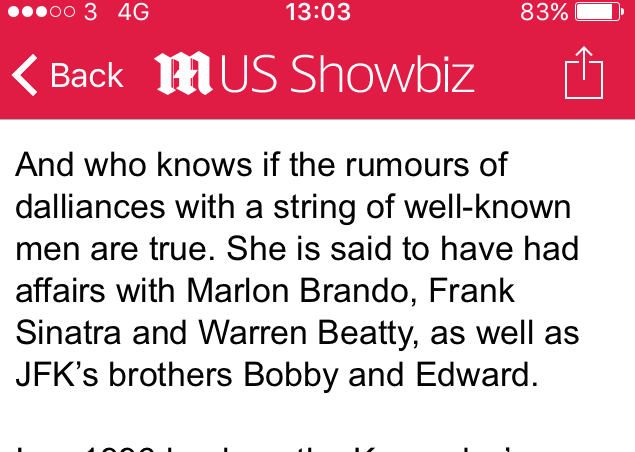 THE BROTHERS! oh my.

if you’ve been reading my writing about the sex lives of dead people, you may’ve been waiting for a certain name to pop up. wait no more, my friend…

whose musings on the sex lives of dead people- jackie, in particular- have yielded a veritable cottage industry of equally unverifiable claims which will bedevil me to my own grave (who will they say i have slept with???!).

i wonder why the mail went with andersen’s 20 year old book here. why not this one? or, god forbid, heymann’s? (have we finally, finally stepped away from heymann??)

remember when everyone in the kennedy family slept with nureyev??! cause that happened.

christopher hitchens and the feminists are aggrieved. jackie wasn’t as great a first lady as we thought. omg, she had some alleged totally unverifiable affairs.

geez, this is like “the twelve days of christmas: the sex lives of dead people edition”… OH BUT WAIT. there is more.

safe to say i have an especially high tolerance for the mail‘s bullshit but this is spectacularly vile. and the mail’s use of “it’s been claimed” seems especially craven here.

with his circus ‘o crazy…

(whilst we are here… when i die, please don’t worry about cutting me out in the stars… just include a pic of me holding my book and wearing elvis glasses in my obit. that’ll more than do.)

do you understand the gravity of the universe in which we are dwelling here? actually, having written that, i’m realizing that perhaps it is just the case that the broader culture is now starting to mirror what has been going on in the culture of jackie biographies for years… hmm…

you know we’re not done, right? 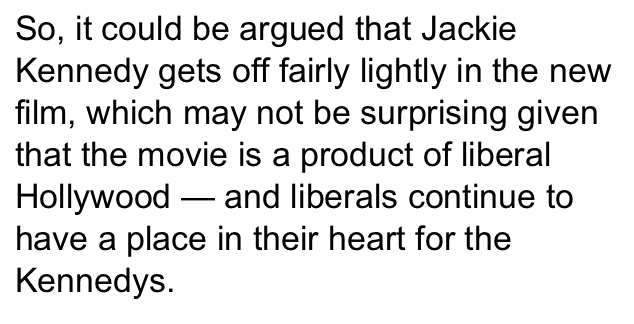 so clearly the mail would’ve preferred a film about jackie’s alleged affairs.

perhaps someone is out there among us reading this article right now and thinking, ohmygod, i will adapt this for a feature film!!!! 2020 here we come…

(sidenote: there’s a total absence of other women in this story excepting the aggrieved collective of feminists.)

but then the mail‘s fun was ruined by hollywood snowflakes…

i know, i know what you’re thinking. you’re all like, but oline, jackie was more than her alleged affairs and her bitchy comments and her failing widowhood. and don’t worry, i hear you.

she was also a pink suit. 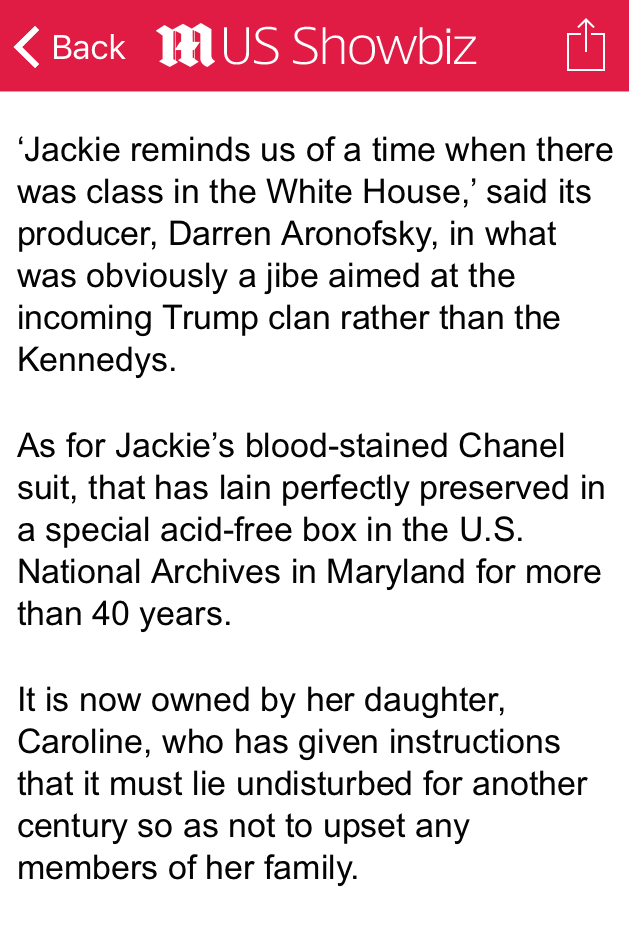 i seriously do not know, were i to set out deliberately to write a story about jackie onassis using all of the narratives peddled within american culture in the last five years regarding jackie onassis’s life, whether i could do a better job than this article in the daily mail.

it is a staggering accomplishment.

the only thing missing is 400-word captions.

the captions in this article are entirely too short.

though they nonetheless still manage to capture the general insanity contained therein.

you know we’re not done yet, right? final thought…

tell me. i really want to know.

personally, i don’t want perfection or a “virtual saint” (whatever that may be).

i want a woman portrayed fully, with all the complexities and contradictions that implies.

staunch characters, staunch women, they don’t weaken. no matter what. 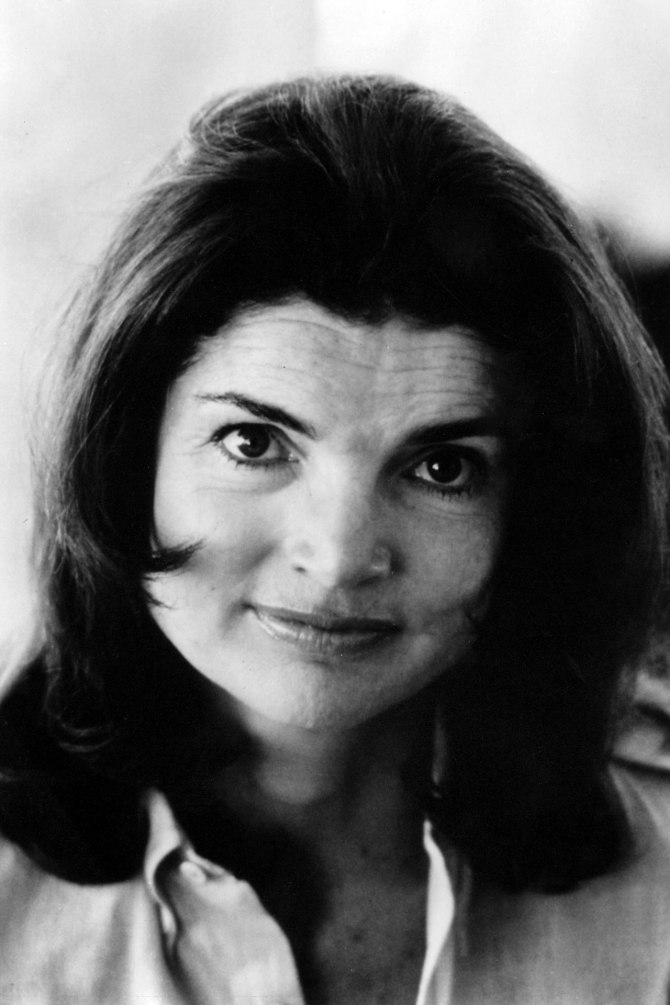