are you aware that prince william was in verbier this past weekend? is this a story being covered outside the daily mail?

in case not, HELLO. welcome to this story.

prince william was in verbier, switzerland over the weekend. thursday to tuesday (i think, without confirming… possible #FakeNews!). monday was commonwealth day. the royals were out in full force. william was not there.

because william was in verbier.

dancing in the dark!

this plays into a preexisting narrative of “william is workshy,” which the mail busted out at almost exactly this same time last year.

the mail, of course, is never less than 2000%-all-in and so has pursued this story with their standard rigor.

the release of two short videos (one on tuesday and another on wednesday) have, of course, led to a bonanza of dance moves analysis.

but there are other complexities here.

there is, of course, the standard daily mail negging of the woman with whom william was photographed exchanging a high five at a lunch where alcohol was on the table.

she is a model. the mail has reprinted a topless modeling shot of her in literally every article they have run about this situation. and, by my count, there have been 16 articles in the last 3 days (a number, admittedly, in part, due to the fact that people related to this woman keep speaking to the daily mail).

key themes have been (1) The Women… 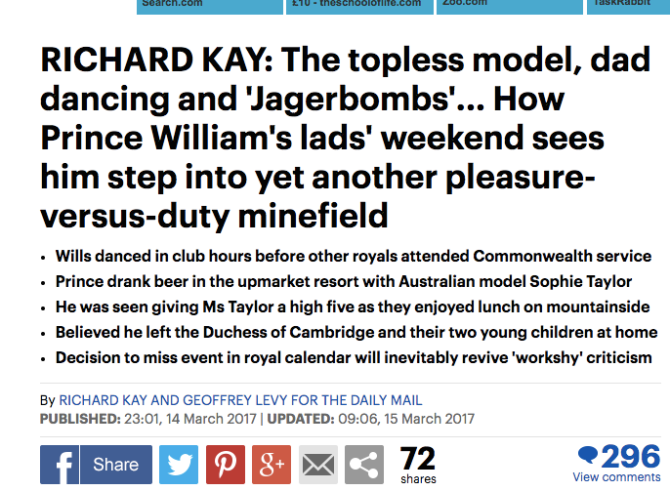 anyhoo. back to here…

so i wanted to go to here so that we can behold together the bitchiness of this daily mail article. because ’tis FIERCE.

all our favorite elements are present.

dramatic narrative accounts of things we could see for ourselves in video footage/photographs: 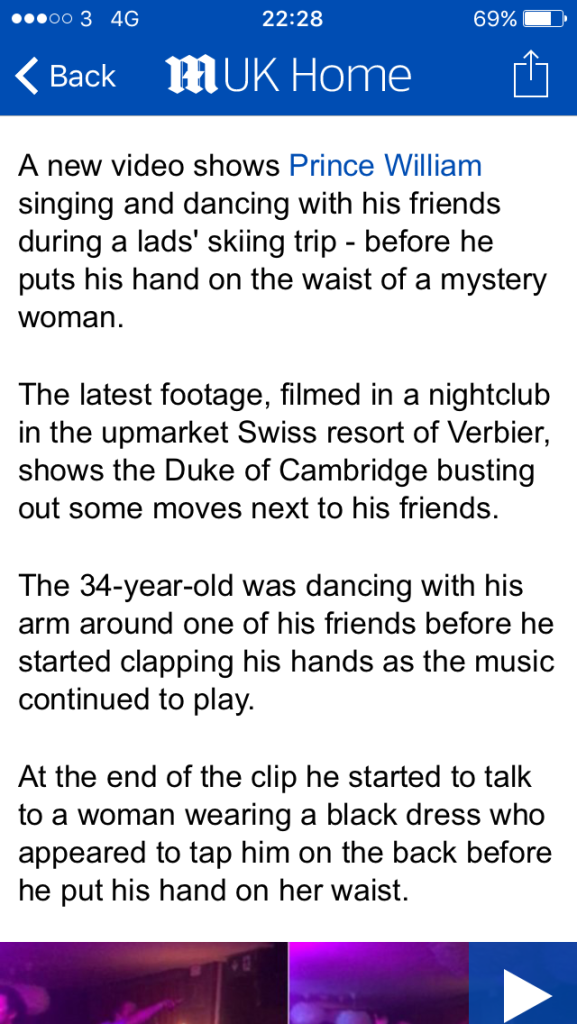 with an attention to detail which rivals analysis of the zapruder film:

plus a nice metaphor:

and some high quality shade:

for the record: the dance moves in these videos are moves we’ve seen before:

and be real. don’t we all pretty much dance like carlton?

when we dance- unless we have trained rigorously in advance for hours a day, weeks on end, with a professional and subsisted on nothing but kelp and lemon water- don’t we all pretty much look like idiots? isn’t this the lesson to be learned from dancing with the stars? that dancing done well takes a hell of a lot of work, and even then the nation might still vote against you for an insufficiently convincing impersonation of a tango pro. (god, life is hard.)

which begs the question that perhaps we, as a society, have unrealistic expectations of the dance moves of men?

but then women are expected to be this in everyday life:

when, really, we mostly just wanna be this…

so maybe a lack of grace around dance moves really isn’t so bad…?