and LO! when you say for years and years that someone HAS TO MARRY, eventually they will and you will be right.

so harry will marry. as was probably likely all along as royals usually eventually do.

the question here was never really will he? 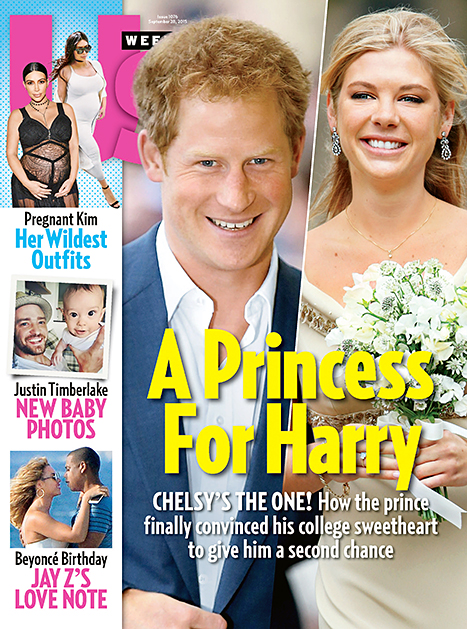 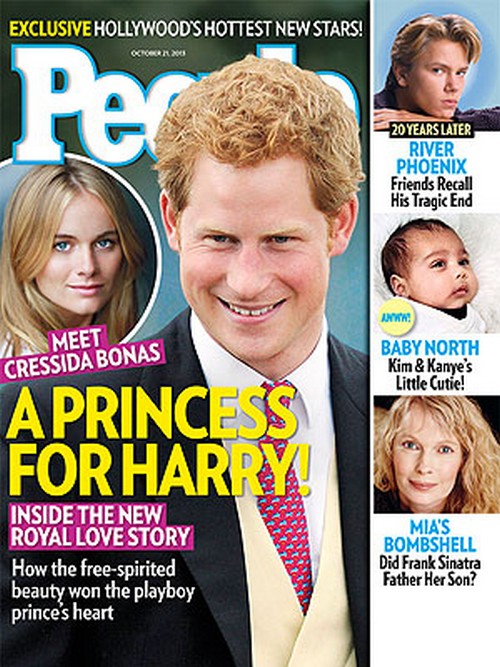 the question was always who?

please know that, because there were multiple megans in my eighth grade year, the megan whose name was spelled meghan was always called ‘megHAN’. meaning i now read the future duchess (of sussex?)’s name as megHAN. and likely will always. (please note also that NONE OF THESE PEOPLE ARE PRINCESSES! to call duchesses princesses is gauche.)

so yes, harry will marry megHAN markle. who i guess we can brand as ‘an american princess’ if we must have a princess. 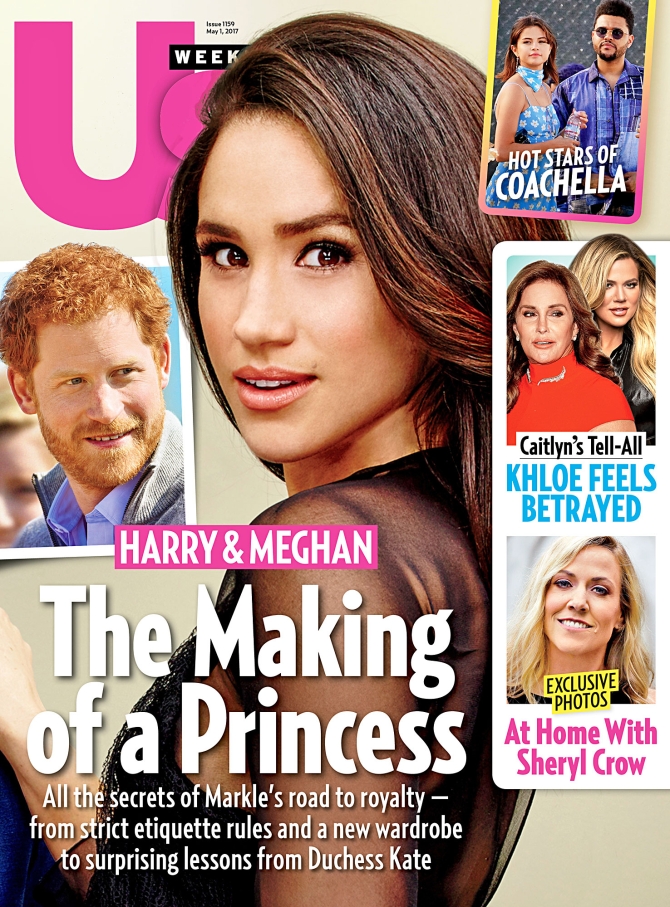 which it seems we must.

the american gossip industry is going to lean into this story SO EFFING HARD.

i mean, the british royal family is already the bread and butter of the american gossip industry.

would there have been a people magazine without diana?

how many of these articles featured mention of her american great-great-grandparents?

and now? a REAL first-generation american.

living in london, meeting the queen, being royal.

that is good copy. especially for america. especially after years of trying (mostly unsuccessfully) to make kate a taboid thing.

her dominant tabloid narrative being reduced now to, simply, BABIES!!! 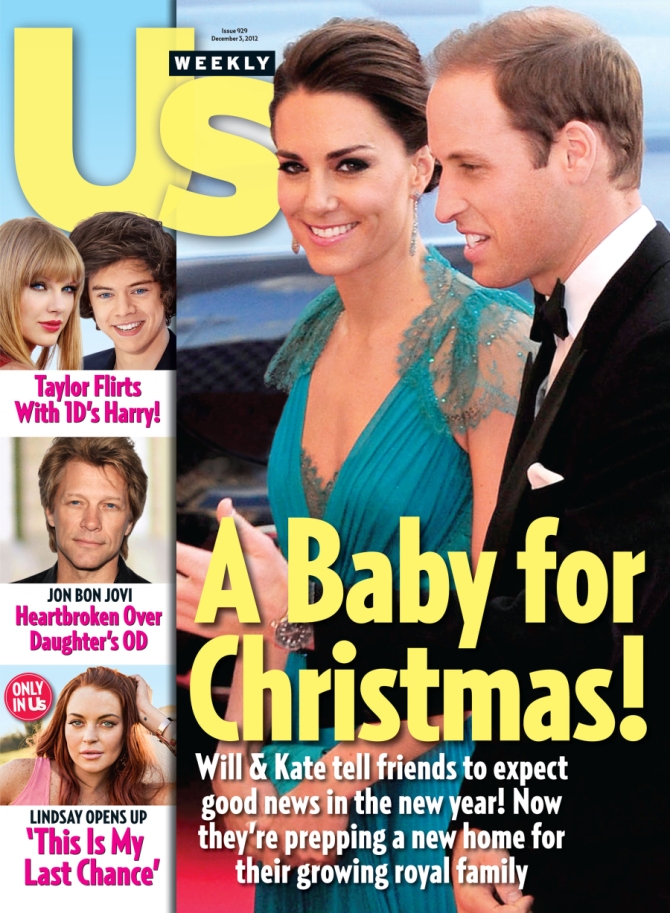 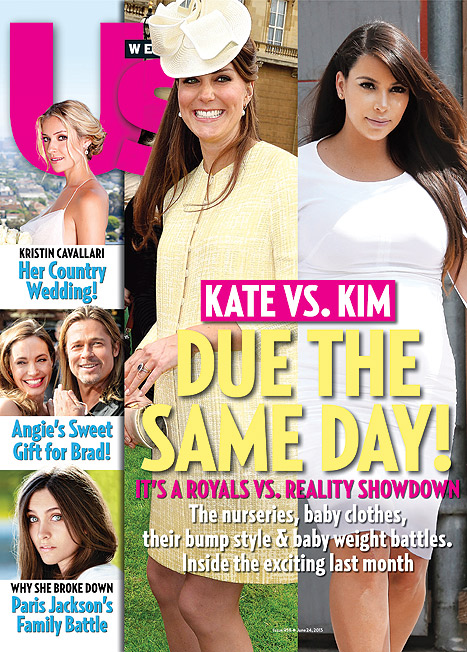 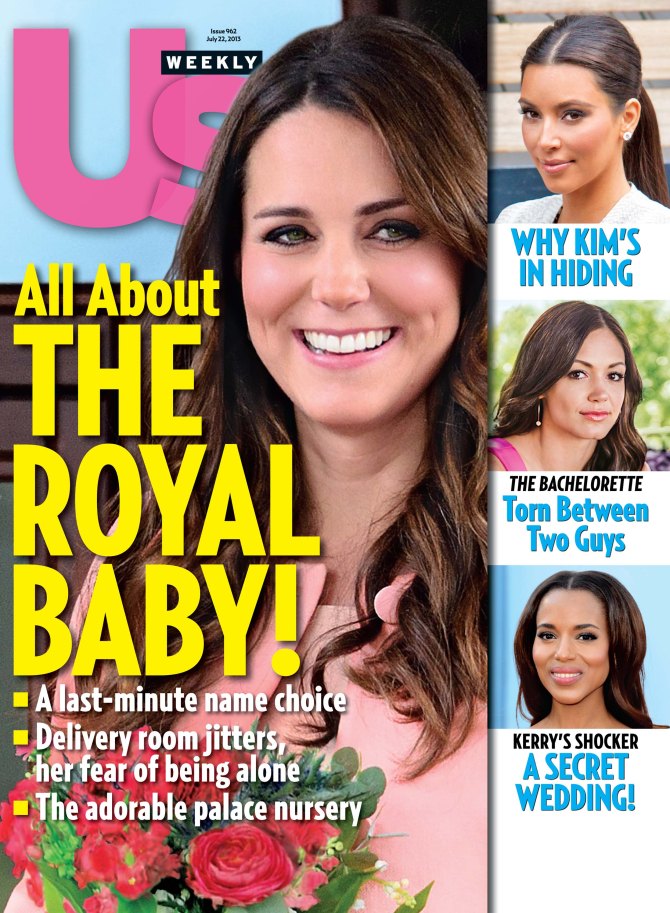 whew. WAS THAT NOT EXHAUSTING?!

(where are the HOW BABY CHANGED WILLIAM’S LIFE covers?)

anyway, i assume megHAN will provide us with some better story lines, because she is (1) american, and the tabloids are going to love that and, accordingly, establish her as a new revenue stream. (2) because she seems genuinely extroverted, as opposed to kate, whom i imagine is introverted, hence the awkward. but also (3): 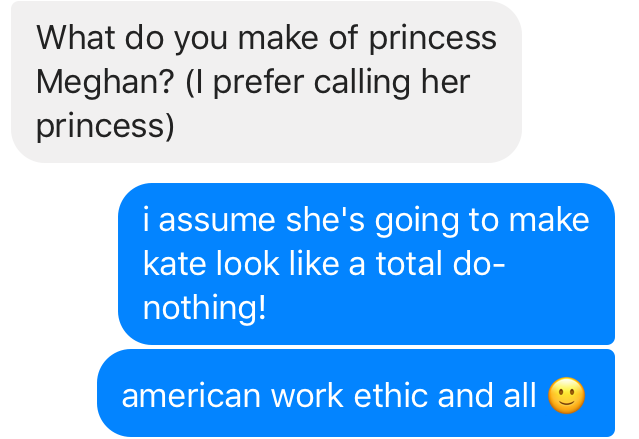 it is a thing.

i think we’ve already seen it in the couple’s interview, where markle talked about ‘boots on the ground.’

typically, one does not talk about duchess-dom in terms of ‘boots on the ground.’ that is a phrase for volunteering and/or theaters of war.

markle has given up her job and is ready to get to work.

that’s not as clear cut as i’ve made it sound there as, as a royal, she is inhibited in many ways, one of which is that she must remain apolitical. but i’m not sure there’s ever been someone who’s entered the royal family quite so prepared and seemingly gung-ho to do heavy lifting. from day 2. the kate rollout was glacial in comparison.

so that is my first point: STORIES GALORE!!

holy moses, how glad are we all that we are not marrying a prince?

confession: i do not believe markle for one second when she says that she really had no idea who prince harry was because americans don’t really know things about british royalty.

she is my age. she was my age when diana died. ain’t no one who was a girl our age then who didn’t at least know who harry was. yes, we all thought william was the cute one (oh, the cruel truths unfurled by time!) but we knew harry too.

so yeah, no. not buying that.

i will buy, however, that there is absolutely no way of preparing for the sheer shitpile of intrusive press coverage that comes when one gets engaged to a prince.

in their interview, markle said this:

it’s easy to be cynical about that. to be all ‘ooooh, you’re an actress. i always see people watching suits on their commute. don’t be acting like this is something different and like it’s something you didn’t want.’

i’m not sure we give people in public life enough credit for persevering in public life- credit we would, no doubt, expect from EVERYONE in our lives were we to attempt the same or something similar.

i write a blog post that feels vaguely exposing and expect trumpets and shares.

i read about a celebrity’s complaint about a depiction of some aspect of their life and tut they should’ve thought about the consequences before putting that out there.

behold the last week in the life of the daily mail: 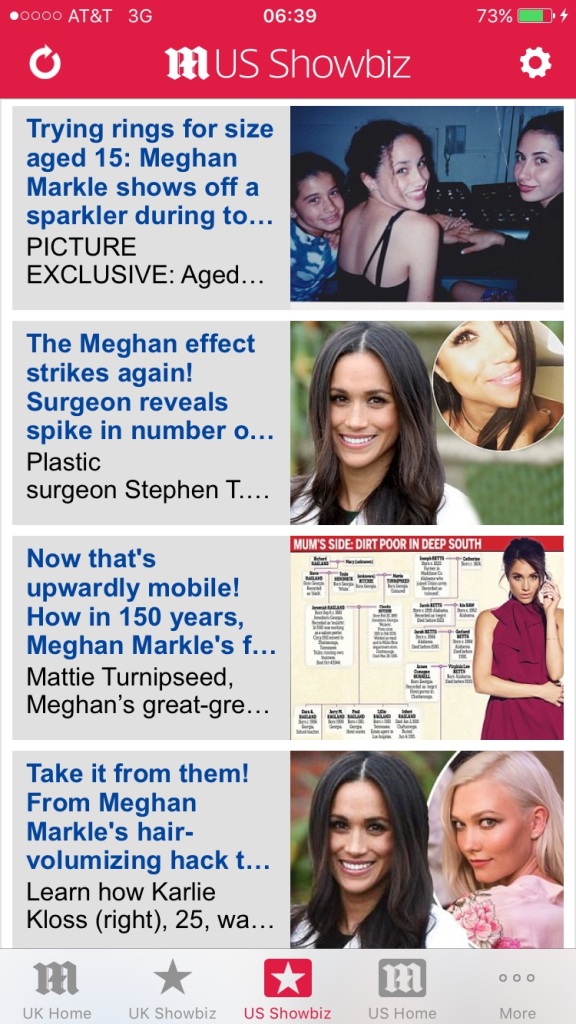 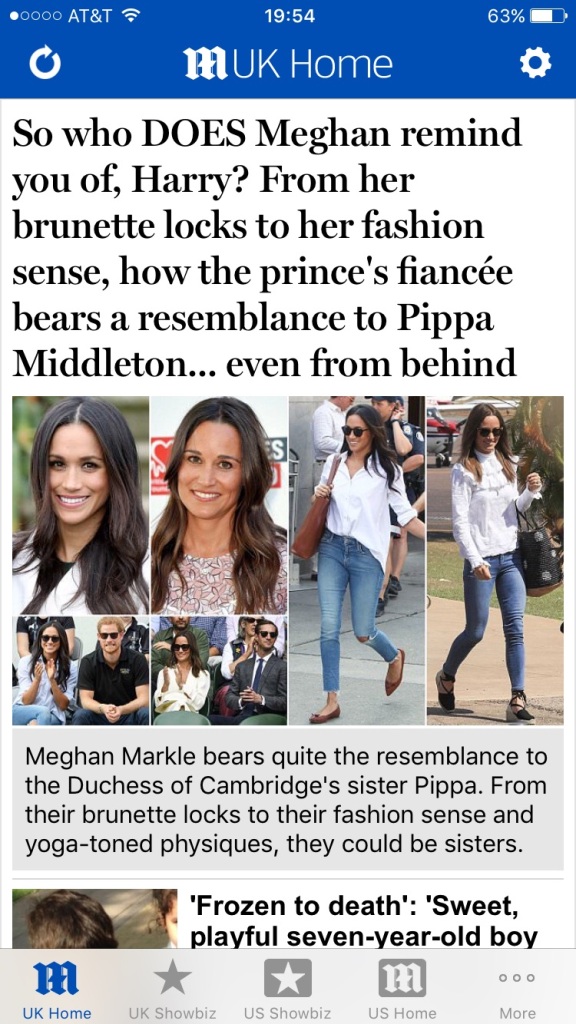 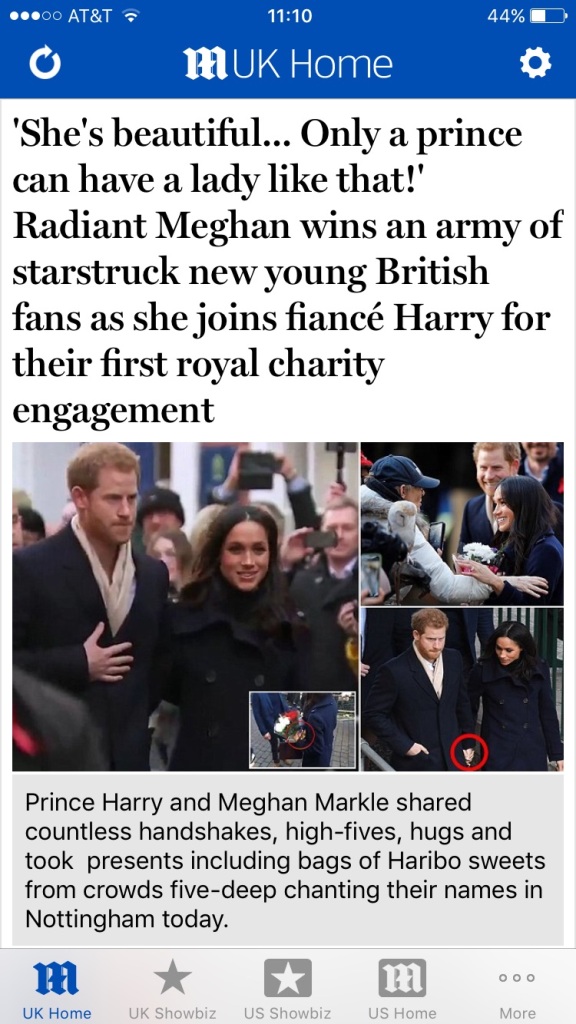 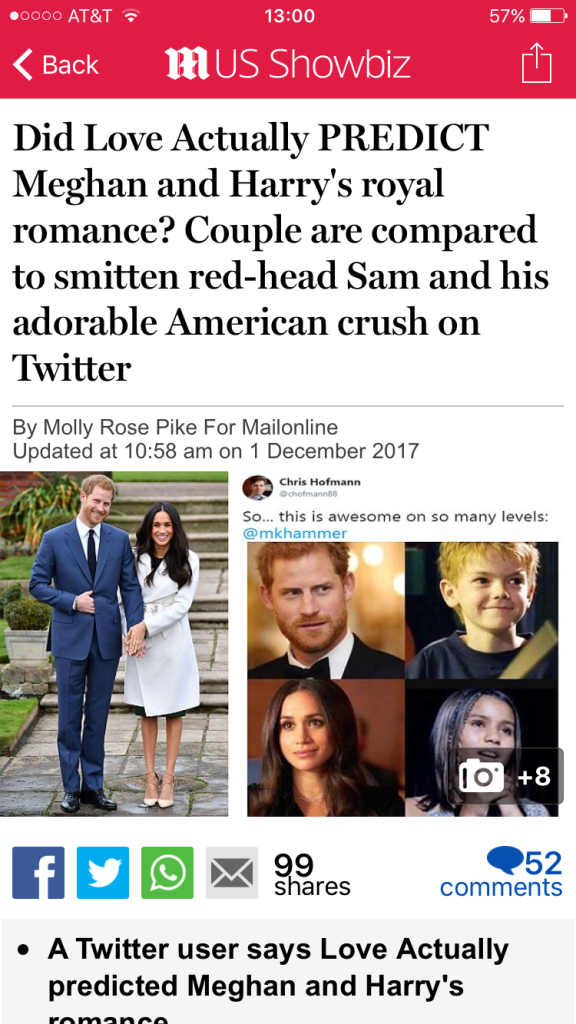 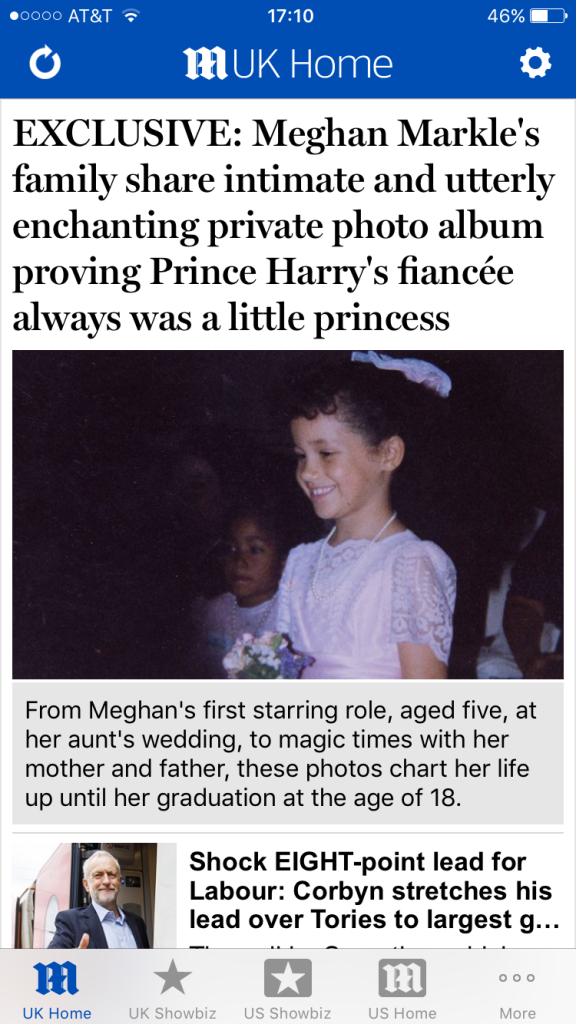 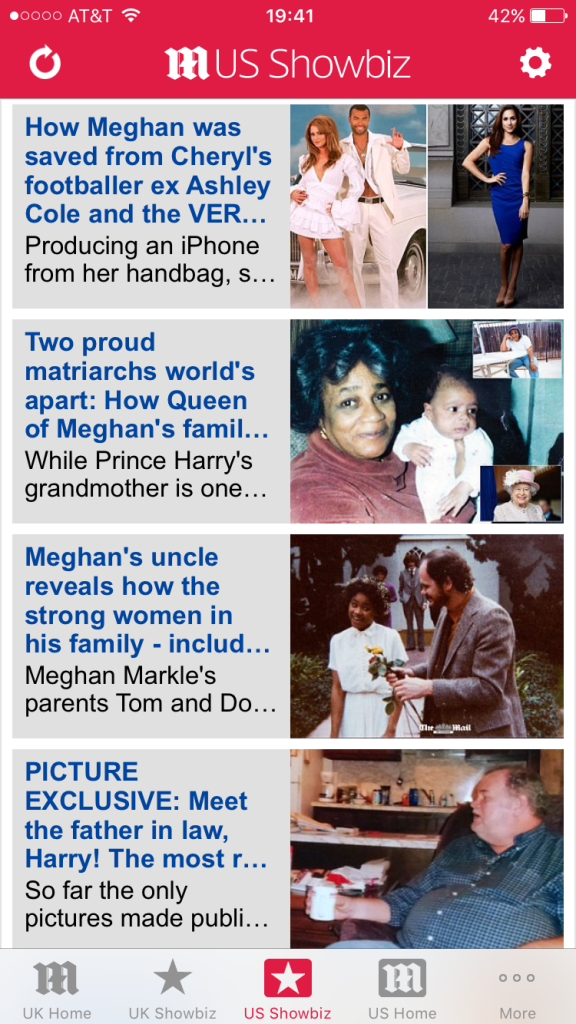 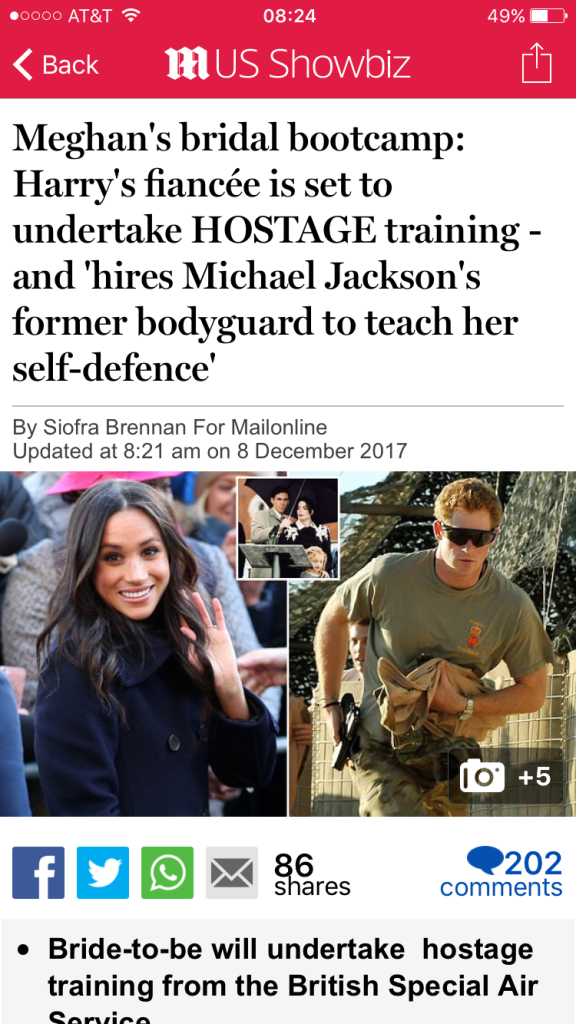 so that is INTENSE, non?

we have reached a point (ie. two weeks into these people’s engagement) where markle’s mother’s dog walking is a top story.

which is laughable while also being frightening, an indication of the level of paparazzi scrutiny these people are living under.

two weeks in, markle has been sold out by a friend to the daily mail, and her family has been put under surveillance.

something to ponder: how different would this story look had diana’s sons been daughters? if it were men marrying into the family rather than women? 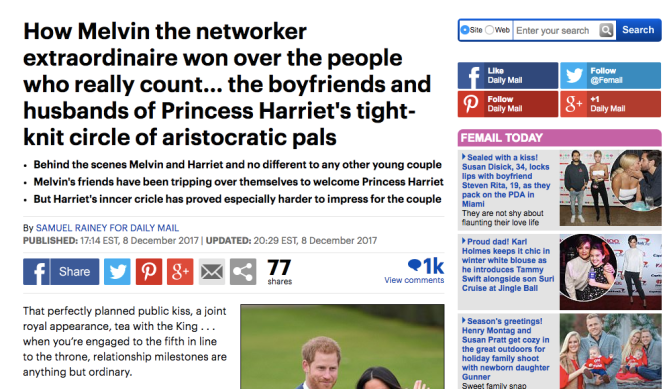