true story: this is all my fault. 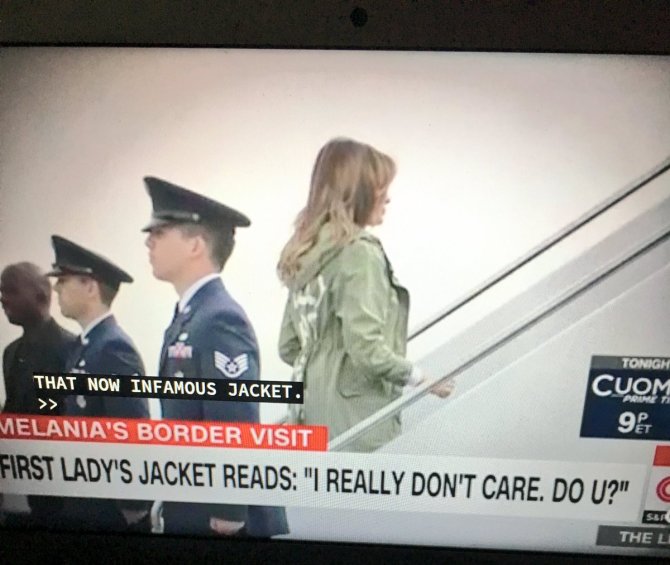 i maybe fetishize the wonders of writing about A Developing Story. my research is on how stories unfold, so i’m probably victim to the Unfolding Story Mystique.

this sits uneasily a long my deep deep hatred of wolf blitzer’s the situation room and our contemporary culture of endlessly BREAKING NEWS.

but nonetheless i fall prey.

so i’m “writing” about melania. by which i mean cranking out conference abstracts and grant applications and existing with this bizarro imagined future wherein i am someone who wants to spend a considerable chunk of the life remaining to them writing about this woman whom i do not enjoy.

apparently masochism is the life skill i honed through my doctoral studies.

my therapist did say i have an unusually high threshold for extreme emotional discomfort.

so melania. here we are.

i watched the interview.

i have twenty minutes remaining but apparently needed a week-long break before proceeding.

that is saying quite a lot, actually.

i write about jackie. every time i google the red dress she wore in canada in 1961 or that damned yellow dress or that one photo of her eating corn on the cob or even just her name or any variation of them, i am confronted with images from her husband’s autopsy.

so i have seen some horrible things.

this 20/20 interview though? that shit is AWFUL.

i do not know where to begin.

her advice to those families who are still separated by the administration’s immigration policies and imprisoned in detention centers, in many cases operated by and profiting the same companies who run our nation’s for-profit prison-industrial complex??

her claim of solidarity with women while demanding their claims of sexual assault and abuse rise to the level of criminal prosecutions?

her demand that evidence of sexual assault be provided lest innocent men’s lives be ruined when WE HAVE SEEN the jackshit that does? 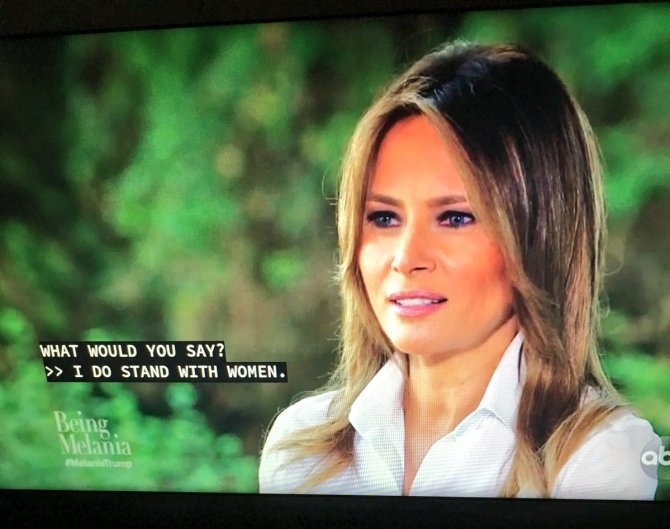 (again, required reading: “It is very difficult to get the train to stop”)

the woman wore a dumb jacket. the story has evolved over time.

this is what interests me about it: the story’s evolution.

she has now told us that she knew exactly what she was doing, so i guess the jig is up.

OF COURSE this jacket with a message printed on the back of it was a message.

glad we cleared that up.

she put the jacket on because left-wing media… then after her visit to the detention center she put it back on “because i saw how media got obsessed with it.”

in the real world, we would call this trolling, which is pretty rich coming from someone whose primary agenda is entitled “Be Best.” presumably, she was not at her best here.

i do not think it is wrong, as an american citizen, to expect the First Lady to be better.

yes, we all have bad days. we just don’t usually use photo-ops to detention centers as a means through which to show them off.

i don’t know what will happen with this jacket in the coming months. already, it has had quite an evolution- selling on ebay for upwards of $1,000 in the immediate aftermath of the initial story then tumbling to a more reasonable $100, and spawning clever knock-offs providing a counter-commentary. 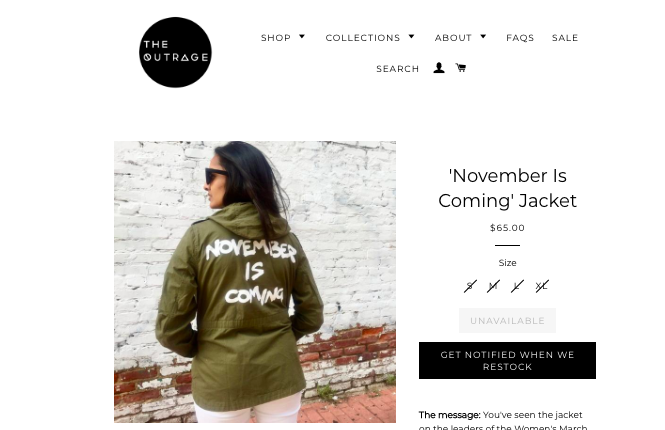 god only knows what’ll be happening with it by the time i come around to writing these conference papers next spring.

i write about jackie because i am, to this day and all these years later, righteously indignant that her story has been told so badly and that we still have so little understanding of what happened, why she mattered, why people cared then and why they still do. increasingly though, i am righteously angered by the ways in which her story has been used in american culture to further some pretty nasty ass shit.

particularly in relation to american white femininity and the policing of Black women in the public sphere.

it is my aim to shut that shit down. which is obviously entirely unrealistic because the horse has bolted the barn. (this metaphor works, right? horses and shit go together…)

not least because this keeps happening… 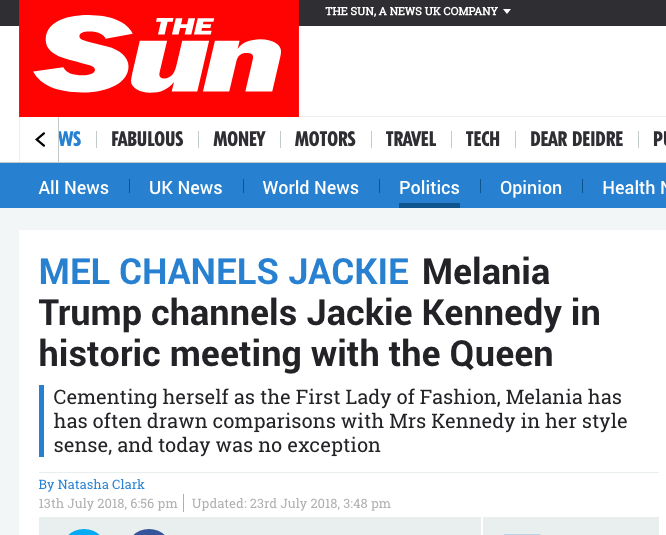 in huge part because i recognize the ways in which jackie’s image in american life has long been used to reenforce ideologies of white supremacy (ie. the facebook post above).

these allusions seem largely aesthetic rather than biographical. at least in the headlines, it is about surfaces and, primarily, clothes. this seems, ostensibly, quite frivolous.

let’s be real, to “channel” jackie at this historical moment is often so simple as wearing pink, and maybe also having brown hair. such an allusion can situate a garment or a person within a visual history, which can be helpful depending upon how sophisticated the parallel actually is.

these allusions, the ones made in headlines? these are not representative of intellectual rigor. i would argue they are also not inherently benign, operating as they do, collectively and over time, to reshape and, potentially, undermine our conceptions of history, reality and fact as well as the lives of the people they reference.

duchess kate wearing polka dots is hardly channeling princess diana, but by daily mail standards it is. does this matter? meh.

at eugenie’s wedding last week, duchess kate wore a dress similar in style and by the same designer as another dress she had previously worn. the mail, of course, headlined is as an “EXACT replica.” 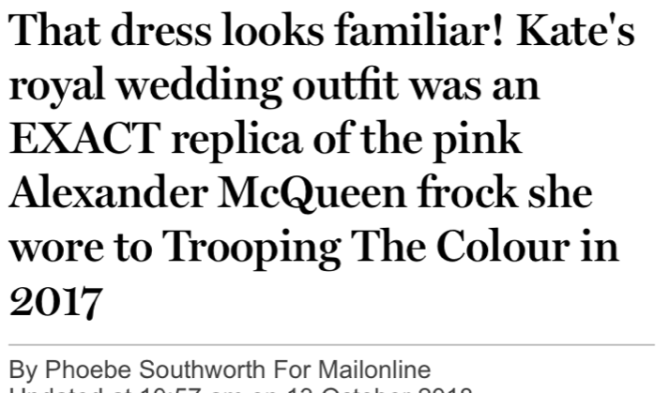 the daily mail is always in it to win it but this is actually quite obviously not true. it is not the exact same dress. LOOK AT THOSE SLEEVES!!!

THESE DRESSES ARE NOT THE SAME!!!! much less an “EXACT replica”!!

the skirt pleats were different too. so exactness is doubly refutable.

this is small beans. but then, small beans is a hill i have repeatedly opted to die on because small beans are usually emblematic of something much bigger.

in a world where an entirely different dress constitutes an “EXACT replica” and one can “channel” jackie kennedy just by having brown hair, who’s to say this 20/20 interview isn’t utterly charming, our first lady is totally harmless, and the parents of “children of tender age” who are still imprisoned in camps at our country’s border shouldn’t just “keep strong” and trust that “it will come,” whatever the hell “it” is?

One thought on “oh, melania: the jacket (emotions via britney)”