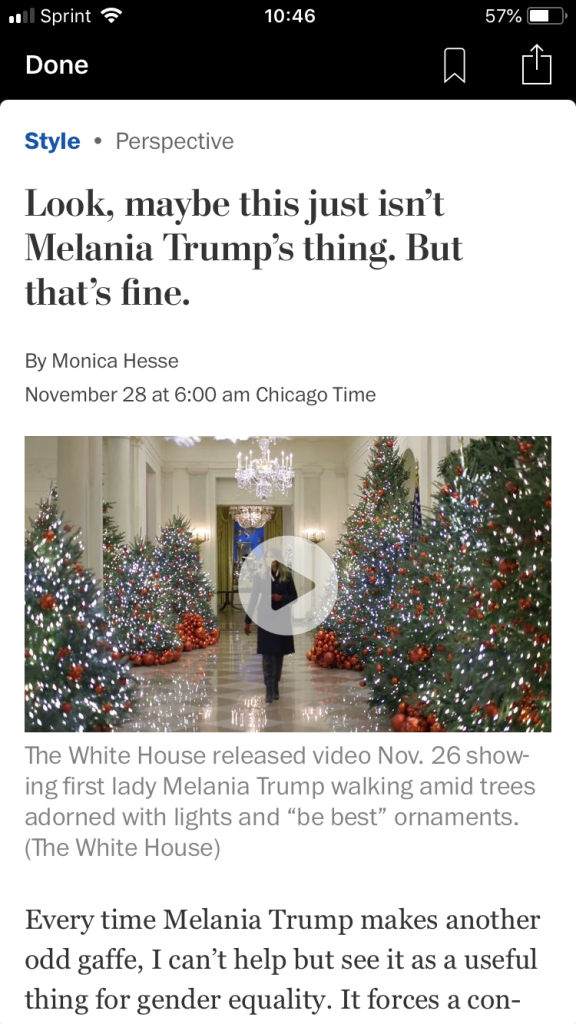 apologies for the lack of gifs. i will be brief, because it is the end of semester and i have papers to grade. rhetoric papers. papers on argument.

that is perhaps why i am so incensed by this op-ed. because i’ve been focused on rhetoric and the evidence fails the argument here. the hasty generalization fallacy is so glaring that it is all i can see.

to summarize my own argument at the outset… yeah, maybe this just isn’t melania trump’s thing. that is not entirely fine, because: whiteness.

to be clear: i am totally 100000000000% on board with professionalizing the position of first lady. i absolutely believe that we, as an american electorate and as human beings, need to “recognize that the role [of first lady] is work” and that “these activities probably deserve compensation.”

it is a job. it is labor. it should be paid. period.

the thing that is missing in this argument is this: ain’t no effing way michelle obama could’ve gotten away with this shit.

but seriously. dream it. what if barack obama went to congress with a proposal to reshape the institution of first lady by making it a paid job and putting someone else in it. or making it a paid post and paying michelle obama for the work she actually did as first lady.

the hellmouth would’ve opened and we’d have all been sucked in, non?

know why? because michelle obama, in being a Black woman, had to be the GREATEST FIRST LADY OF ALL TIME EVER IN THE HISTORY OF THE WORLD. or, at the very least, give eight years of her life to trying.

you may or may not agree that she was successful in doing this, but- make no mistake- those were the stakes. and, be real, didn’t she make it look at least a little fun?

this op-ed gives the impression that all of the first ladies who preceded trump just loooooooved the “tasks of hosting dignitaries, traveling on behalf of an administration, glad-handing and public speaking all require skill, enthusiasm and lots of time.” like women haven’t been pasting on smiles and falling into line since the beginning of time. like we don’t know that michelle obama herself wasn’t all that eager about assuming the role, to say nothing of jacqueline kennedy, bess truman, mary todd lincoln, etc., etc.

we tend to see michelle obama as the outlier, the first Black first lady, rather than observe that all the other first ladies were white. so that michelle obama’s Blackness is noted but the whiteness of everyone else remains unseen and the position of first lady has nothing at all to do with race, except when michelle obama occupied the post.

trump is white. that is not inconsequential. i would argue, that in this case and in this argument, it is hugely consequential.

there are affordances of being a white woman. one of those, historically- and, admittedly, one that is quite niche- has been that, if you are a white lady and you screw up being first lady, it is, broadly speaking, not the end of the world. you are still believed to be, broadly speaking, humane. (HRC is a special case here, as always.)

think of the allowances we make for a president because he is The President. the power of the institution, of the office. same goes for First Lady. how long did the left root for melania trump to be a secret member of the resistance in spite of her history of questioning the legitimacy of barack obama’s birth certificate on the view?

the position of first lady is an institution. and like most institutions, its protections and privileges do not extend equally to everyone.

the argument that melania trump is a great way into the conversation of revolutionizing the institution of first lady is slowly being positioned as one of the silver linings of her occupancy of the post. both because she appears to be so resistant to it and, according to this op-ed, because she’s maybe not very good at it.

“If everyone could just admit that Melania is bad at this” then we could get rid of this job. we could change it and have a revolution and strike a blow for gender equality.

if we could just pause though, and look at the ways in which melania’s being bad at this, melania’s being allowed to be bad at this, is entrenched in the notion that it’s totally ok for white women to suck at things where it would totally not be similarly ok for women of color to suck, then maybe we could start to have the conversation we actually need to be having.

this is about striking a blow for gender equality, yes. but it’s a blow being enabled by the privileges of whiteness. given this op-ed and a history of white women focusing on gender rather than race, this is clearly a conversation we are perfectly comfortable having without acknowledging that. and that is not fine.

2 thoughts on “i do not have time for this”