by way of preface… my dear friend EL and i have a friendship ya’ll should all be jealous of.

for many, many reasons, one of which is that, because as part of a larger story that i will not go into here, in the last year we have often communicated through andrew garfield memes. 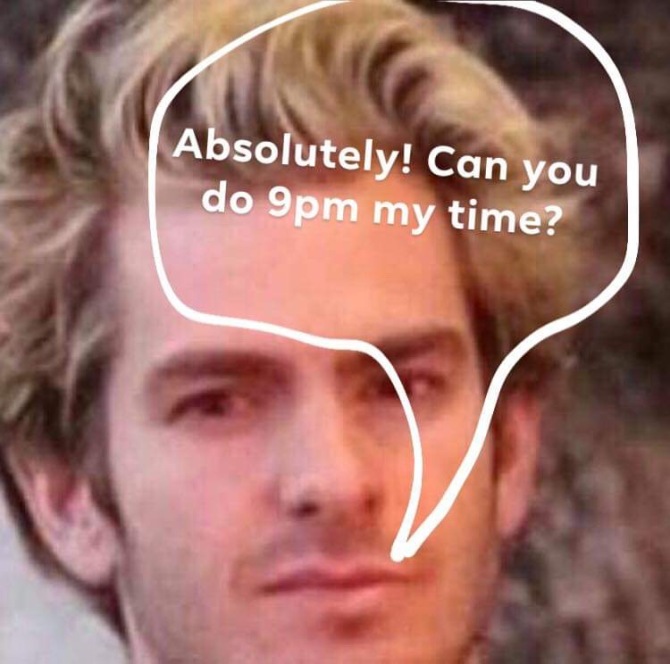 as a way of doing life, i’d highly recommend this.

it has worked out well for us.

but, then, nothing lasts forever. 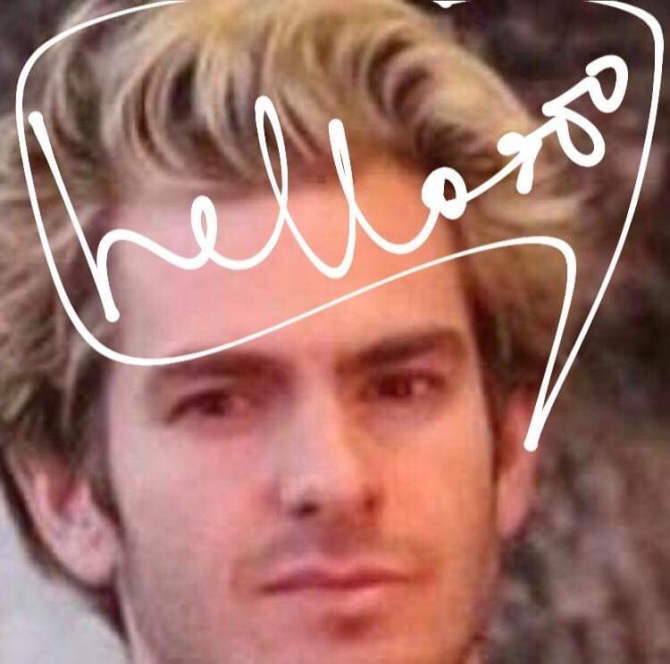 norman mailer’s masculinity is one of these things.

who the hell in their right mind would want to write about that?!

file a very particular ensemble of andrew garfield’s in this category too.

i do not want to write about it.

there are moments when one quite simply cannot ignore the horror.

no. one must engage with it, stare it down, take it apart in the most complete possible detail in order to live one’s life again. 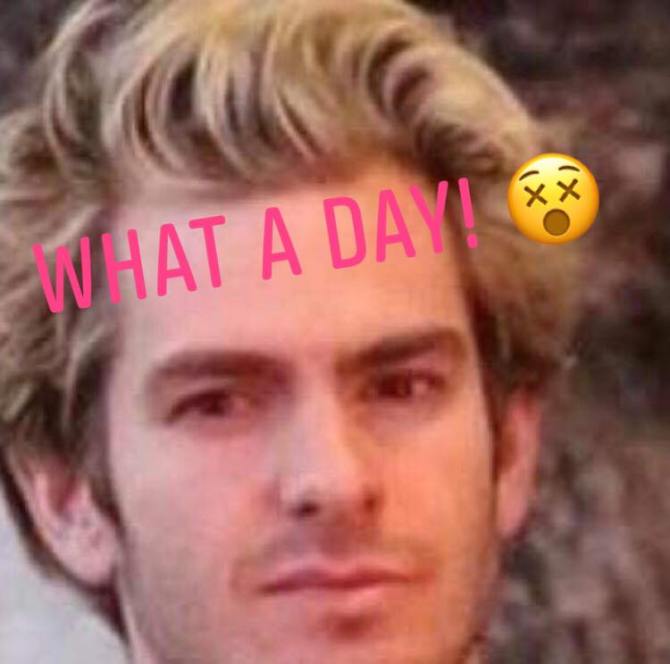 not as one was living it before because, post-ensemble, things have inevitably changed.

there is no going back.

we are living in a post-ensemble world.

the best we can hope for is to carry on. 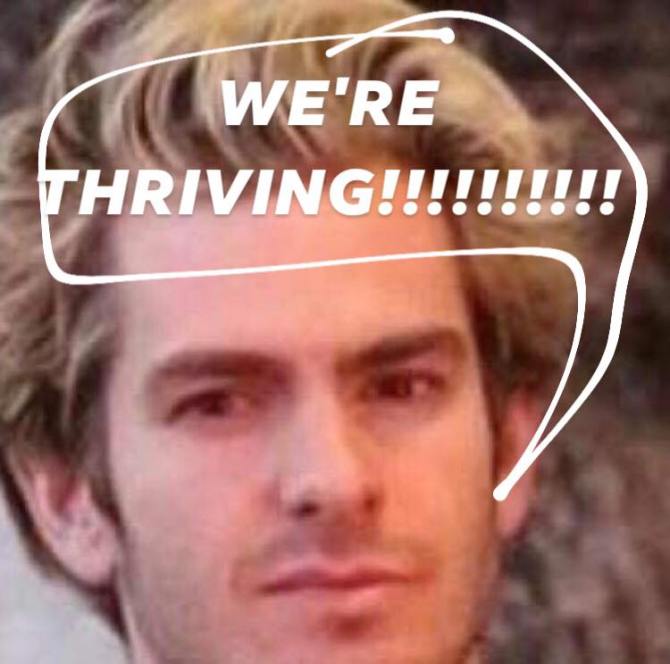 what ensemble is this you are speaking of, oline? you may be wondering.

how can it possibly live up to all this hype, you may ask.

this is what i’m talking about: 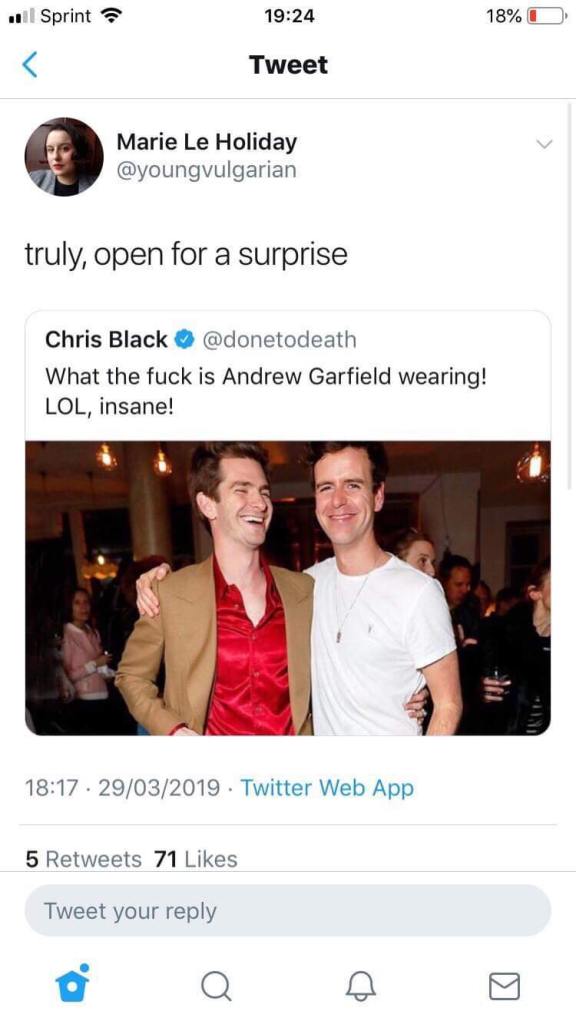 can you even? i’m gonna, but i cannot.

oh but wait. true story: this was last march.

this monstrosity was worn last march. (and i will say this is, comparatively, an almost flattering angle, which is to say the least unflattering of angles on a deeply unflattering outfit.)

so i’m not being timely at all in talking about it here, right?

because no one, and i repeat, NO ONE would ever wear such a monstrosity again. you would assume, yeah?

because this is clearly dreadful on every level. (if you’re like, oline, i think there are some levels on which this is not completely dreadful, fear not because i’mma change your mind in a mo.)

on an episode of rupaul’s drag race uk that just aired, LO.

the ensemble is back.

so, clearly, we need to talk.

in case it’s not immediately obvious why this is so bad.

these jeans are… NOT GREAT.

note the jeans on the right. the totally normal late 2010s jeans. they really put things in perspective, no?

then note the jeans on the right. (ie. bellbottoms… which they apparently call “elephant leg pants” in the UK!) specifically the hem. and how the hem makes it look like this grown man is wearing DOLL SHOES. 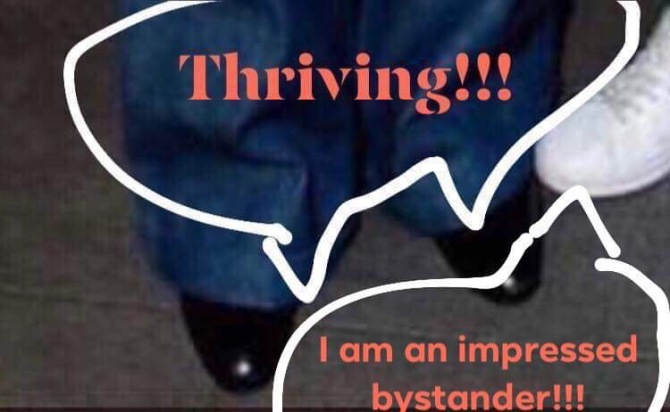 as a general rule, fashionably speaking, unless one is a doll, one really should not aspire to looking like one is wearing doll shoes.

WE HAVE DISCUSSED THIS. dolls are very seldom ever cute. 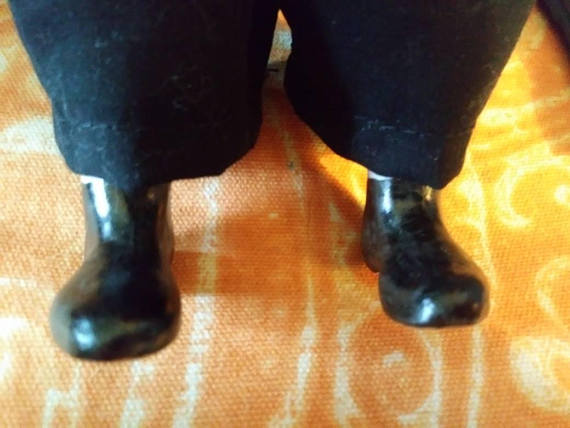 he looks like a toy soldier, EL exclaimed of garfield. and she’s not wrong. 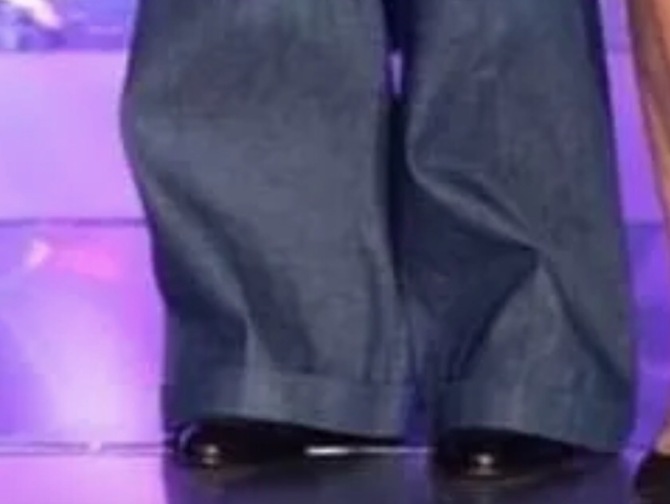 NO. if you are tempted to do this, i don’t want to be a snob but listen to your oline! i am here to tell you, DO NOT.

i have sympathy for this shirt. i 100000% wanted this shirt when it was a part of the victoria’s secret clothing line in 1996.

does it go with those pants? no.

does it go with doll feet? no.

DOES IT GO WITH THAT FUCKING DREADFUL OVERSIZED MUD COLORED BLAZER THAT APPEARS TO HAVE COME FROM THE PRINCESS DIANA AVOIDING THE HUNT AT BALMORAL IN THE MID-1980S FASHION COLLECTION?

there was a moment where i thought this was a one-button blazer. then i realized it’s a two-buttoned blazer. and i quite honestly do not know which is worse.

what is the material? can you tell? the more i look, the more it looks like canvas. again, is that better or worse? idk. i’ve stared at this ensemble for too long. it is the best and worst of times.

the thing about this ensemble is this (EL and i agree): each piece of it is distinctively not awesome on its own.

to wear those shoes with a dress suit would be meh. to wear that shirt with some black skinny jeans would be ick. to wear that god-awful blazer with anything would be game over.

BUT TO WEAR IT ALL TOGETHER.

this is a perfect storm, EL says. too true.

look at everyone else.

they have clearly shown up for rupaul’s drag race. they are here to fashion. HARD.

garfield, in contrast, appears to have arrived straight from filming john travolta: fevered dance, behind the wiglets, the lifetime movie.

#tipsfromoline: let your base layer be oversized and your top layer fitted. with a looser shirt, this could be… something else. something, potentially, more bearable if not redeemable. but with the fitted shirt and the over-sized blazer, it looks like he caught a chill on the way from the set of john travolta: fevered dance, behind the wiglets, the lifetime movie and grabbed a three sizes two large blazer from the salvation army on the way to rupaul’s.

riddle me this: are these photographs from the same day? 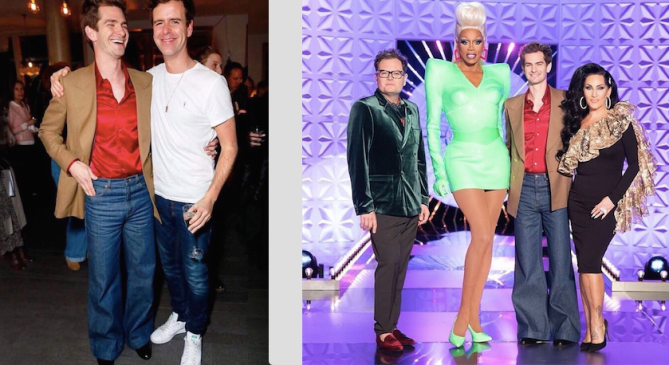 because that would make it incrementally less the worst thing ever, right? because then it would simply mean that garfield did two things in one day whilst wearing a deeply offensive ensemble.

what it wouldn’t mean is that he voluntarily put on this outfit twice in his life.

YOLO. how horrifying to have wasted two whole days wearing this.

to be fair though, he is joyous there.

does this outfit spark joy??

am i a horrible shrew for wanting to BURN THIS OUTFIT TO THE GROUND??

i’m waiting for it. that moment when you’ve looked so deeply into something that it suddenly assumes a new beauty. like when you think really really hard about a word. like when you think really really hard about the word orange, so hard that you briefly lose touch with the word orange and your own understanding of orange and orange begins to sound both strange and new so that when you say orange, when orange comes out of your mouth, orange sounds like something you’ve never ever said before.

and then it’s gone. it slips back into place and it seems really fucking weird that you were ever weirded out by the unfamiliarity of a word you feel you’ve always known.

i’m waiting for that moment with this outfit. it has yet to come.

(YO, IT TOTALLY HAPPENED!!!! that moment! half an hour after i wrote the above, when i was editing this post and went back and looked at the original shot from march and put in the parenthetical caveat that you already read: “and i will say this is, comparatively, an almost flattering angle, which is to say the least unflattering of angles on a deeply unflattering outfit.” THAT!!!! that was the briefly sublime moment where this outfit assumed something approaching, if not full-on beauty, at least the fashion equivalent of jolie laide and i caught myself wondering if had just written 1,500 words on an outfit that really isn’t all that bad. briefly, mind you. and then it was right back to being monstrous.)

i just googled “when did they film rupaul’s drag race uk” on the off-chance that it was THIS VERY SAME DAY. alas, this investigation has not yielded clarity.

confession: i have CSIed the shit out of these pictures in an effort to determine whether the possibility exists.

did you notice he was wearing a ring on drag race? like a proper cocktail ring?

and also maybe in the march photograph?

this is literally the only part of this outfit i can get behind but it’s also an odd level of commitment to wearing this ensemble on rupaul’s drag race uk 100% exactly the same as it was worn last march.

i want to say this is phd-level thinking, but i’m pretty sure i got this attention to detail from watching murder, she wrote. (by which, let’s be real, i actually mean elvis: dead or alive?)

the question here then is this: we know we live in a world where andrew garfield wore this outfit. that has happened. we are now post-ensemble.

BUT (and, as pee-wee herman said, everybody has a big but), do we live in a world where andrew garfield decided to inflict unrecoverable aesthetic injury upon the whole lot of us TWICE? where, GOD HELP US, he might wear it again??!?!

that i do not know. but i so want to believe in the good in humanity.

and, in a world where so much seems so uncertain, i need to believe that we will never see this ensemble again.

One thought on “on andrew garfield’s jeans”