this is obviously how all good news is spread.

for further context, GQ has historicized this ensemble in relation to the broader Week of Amazing Harry Styles fashions, so this is not a stand alone incident. remember: context matters, people.

but i think it warrants a celebration all its own. 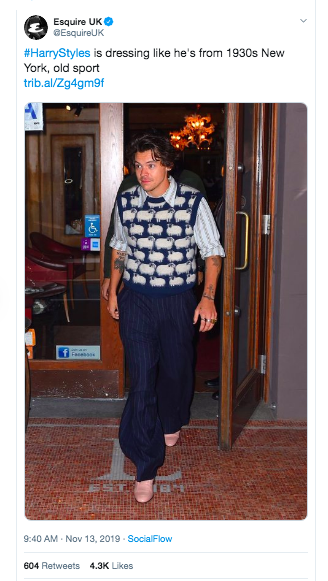 i’mma assume IMMEDIATELY ya’ll are all like: BUT, OLINE!!! you just made fun of andrew garfield’s ensemble!!!! you just mocked garfield’s princess diana blazer and disco style jeans. this isn’t fair. #JUSTICE FOR ANDREW!!!

well, people. life is not fair.

but, beyond that pearl of wisdom, there are some key distinctions.

you may remember that my issue with garfield’s look was a lack of coherence.

i have sympathy for this shirt. i 100000% wanted this shirt when it was a part of the victoria’s secret clothing line in 1996.

does it go with those pants? no.

does it go with doll feet? no.

DOES IT GO WITH THAT FUCKING DREADFUL OVERSIZED MUD COLORED BLAZER THAT APPEARS TO HAVE COME FROM THE PRINCESS DIANA AVOIDING THE HUNT AT BALMORAL IN THE MID-1980S FASHION COLLECTION? 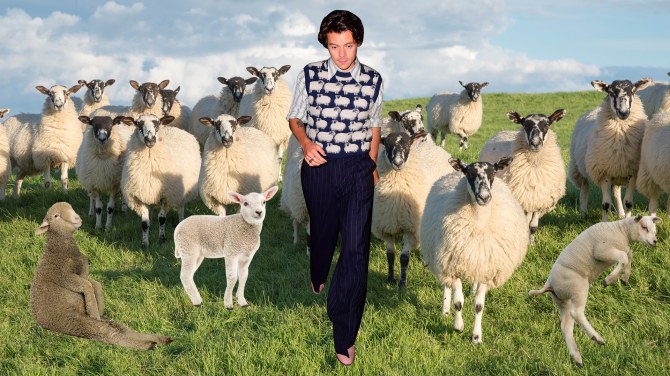 the thing here, though, is it’s not just about the sheep. it’s about the combo. let’s scroll…

there’s the sheep sweater obvi, which is quite a statement piece. 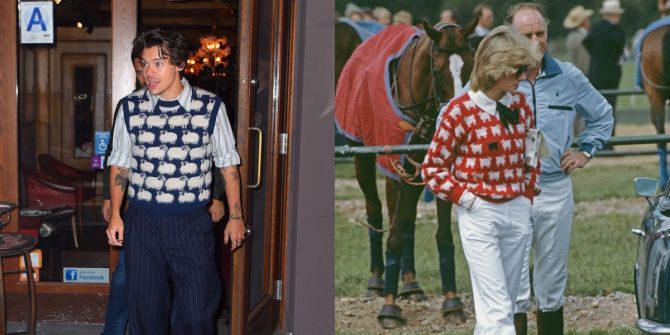 again, in the princess diana wheelhouse (which, let me just say, if the winter trend is celebrity men wearing princess diana fashions of yore, i am here for it).

but, come with me. look beyond the sheep vortex.

for this is a spectacularly well executed look.

we’ve got a button-down shirt, sleeves rolled up, triple stripes.

apologies for the crotch shot here, but we’ve got trousers in a contrasting single stripe…

also, LOOK AT THEM RINGS, YO!! my heart.

the tattoos are doing some important work here too, right? they undercut the sweater’s insouciance. that sweater is not here to play. i think we can all agree, that sweater is here to have sex with us.

the nail polish reassures that that sex will be both enthusiastically consensual and hella hot.

hand on heart, i owned the shoes once. but i bought mine on the internet for £16, they had laces, and they lasted, like, a month. i mean, it was an unending stream of compliments for that month, which was nice, but they did not endure.

i’m guessing maybe harry styles did not buy these shoes on the internet. i hope they give him more than one month, because they are RAGING.

you see it, right?

the vast difference between what is happening here? why one is working and one is profoundly not? this was helpful, non?

have a good weekend. class dismissed.