firstly, a disclaimer: i am not a film critic. thanks to a first boyfriend who worked at a cinema and ensured that i saw every single movie released in summer of 1999, i like movies. and, thanks to a vast over-education, i like thinking critically. and i find that, when in the midst of being over-educated, i find it increasingly difficult to turn off that critical faculty. which brings us to the bling ring.

i think my problem with the bling ring is the same as my problem with marie antoinette, to a great extent, and lost in translation, to a lesser extent. and that is that in these films- and don’t get me wrong, because i do love her work- sofia coppola doesn’t really do characters.

she does ennui, yes.

omg, does she ever do ennui.

that’s not to discount the value of ennui but to suggest it is an area at which she excels and is, maybe even, master. 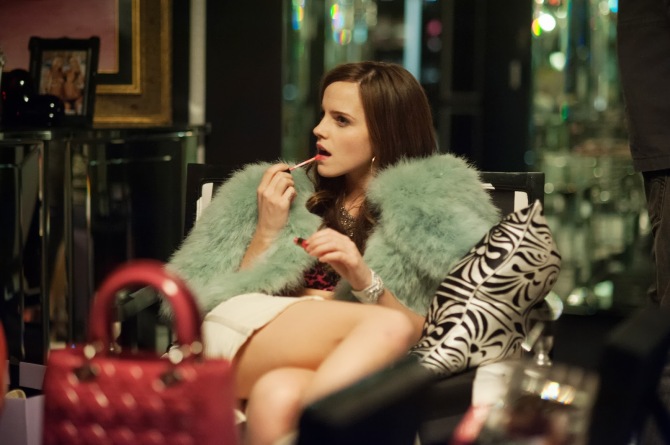 and i think she does a good job in capturing the sort of numbness that comes from the collision of a limitation of personal power and an excess of external expectation and pressure. 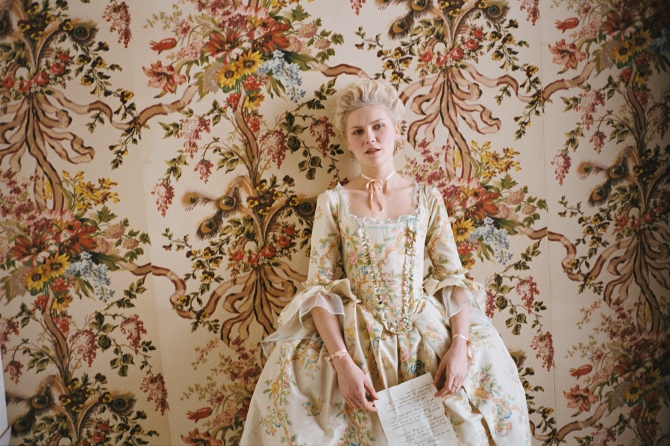 which is maybe kind of a huge part of the female experience and something that most definitely needs to be portrayed onscreen.

but, looking at the three films i’ve mentioned (excluding somewhere, because i’ve not seen it, and the virgin suicides, because i’ve read the book and seen the movie and the movie does a bang-on job of capturing the book, so that says more about the material coppola is drawn to than about the protagonists she creates), a pattern emerges.

the consumption montages of marie antoinette are given enough explication so that, viewing them, we know this is a psychodramatic moment wherein a woman uses stuff to make up for her inability to have sex with her husband and provide an heir to the french throne. 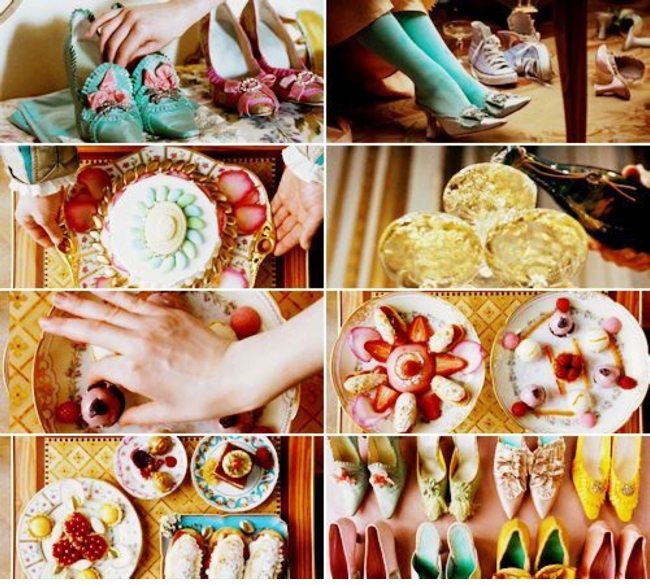 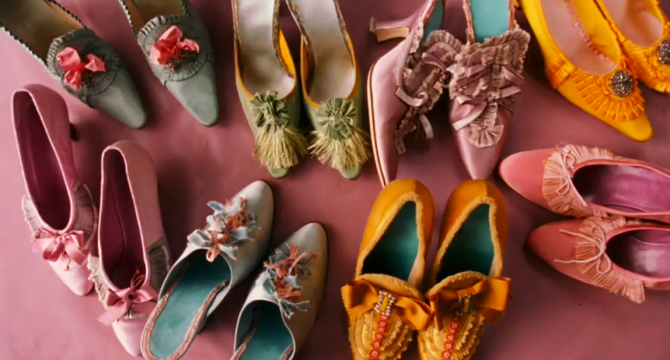 the consumption in the bling ring is about teenagers stealing stuff… because why? 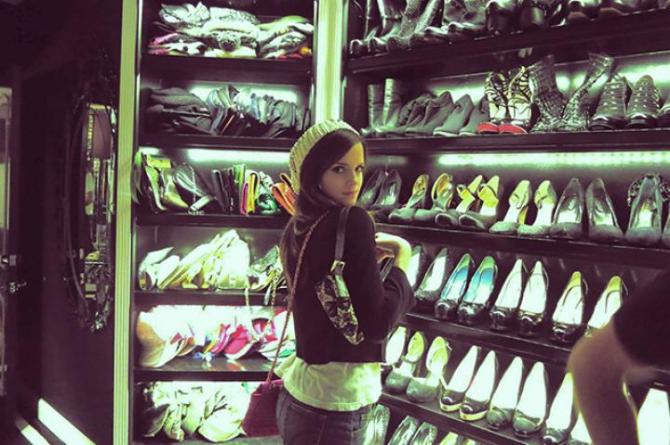 i think coppola does an excellent job of creating worlds or environments for her characters. and also, in marie antoinette and lost in translation, of conveying the characters dislocation and unease within those worlds.

as opposed to, say, wes anderson’s darjeeling limited (which, again, i love), where the characters seem to float through foreignness largely unaffected.

in coppola’s films, the characters are immersed.

having said that, i’m not sure i’ll stand by it as regards lost in translation, but it certainly holds up in marie and in the bling ring to a lesser extent- the protagonists are, however briefly, immersing themselves in the culture of celebrity, invading famous people’s homes, pilfering stuff and incorporating it into their own public and/or private identities.

that is, in part, why i think marie and lost in translation are rather arduous to watch, at times. because of the ennui, but also because of the cultural discomfort and the characters own uneasiness and dislocation. the bling ring is also uncomfortable, but in a different way. because i think it brings to the fore the fact that, while i think coppola is excellent at creating a sense of place, she’s maybe rather shit at creating characters. 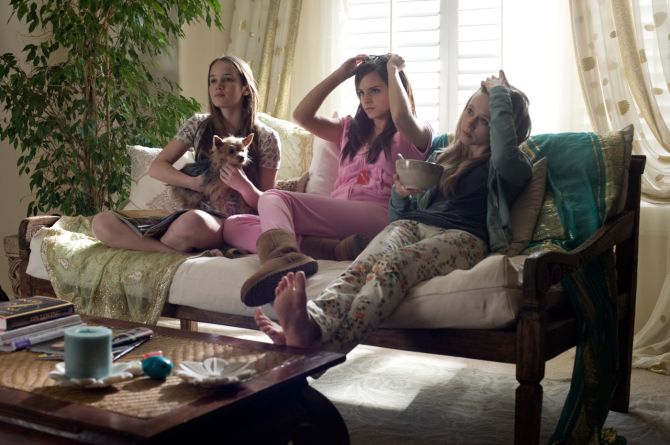 well, maybe not in creating them but in giving us enough of them to hold on to.

feminéma has a far more eloquent discussion of this, but in the bling ring, the gay guy who didn’t fit in- i think his name is mark?-  is the character with whom we (the audience) are meant to identify. it is a sign of how ephemeral these characters felt that, even as the movie was running, i was never entirely certain of their names.

i also never got a sense of any of their motivations, of why they were stealing, beyond the fact that they did it because they could. which was maybe what coppola was going for? maybe that was why they were stealing and that says something deep and meaningful and lasting about the state of our celebrity/consumption-driven culture now? but it was all so vapid and they were all so bored and there was so much stuff that any larger meanings seemed to elide me.

i found the bling ring both numbing and disturbing. and it kind of made no sense.

admittedly, i’m not as familiar with this story as i was with that at the heart of marie, but many of the things that initially troubled me in marie– a movie  i have come to love as a movie whilst still abhorring the version of marie antoinette portrayed- were present in the bling ring on an even more exaggerated scale. 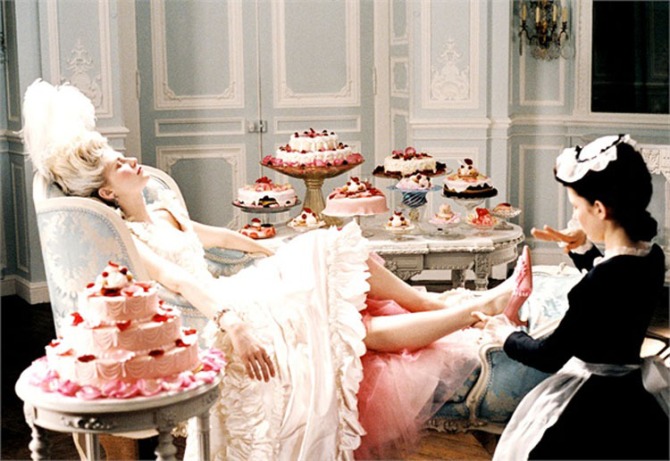 in both the bling ring and marie antoinette, there is no depth of character, which means the films are glossy and stuffed and yet alarmingly vacant at the core.

which is maybe the point? in which case, yes, excellent film-making.

but i don’t know if that it is the point.

sofia coppola is one of the premier contemporary female directors, and maybe it’s unfair to expect her to bear the mantle of Supreme Teller of Female Stories, though- judging from nothing but her oeuvre, which is largely comprised of stories of women- she’s probably not averse to that.

which is precisely why i want more from her. because she’s the pre-eminent person telling stories of this nature and yet the stories as she tells them lack a solidity, a hardness to which the audience can cling or- at the very least- gain its balance. as a result, the characters, most of them women, slide off and what we’re left with is pretty stories of sweets and champagne and stolen goods and glossy, slick surfaces. empty calories, really, where we need sustenance.